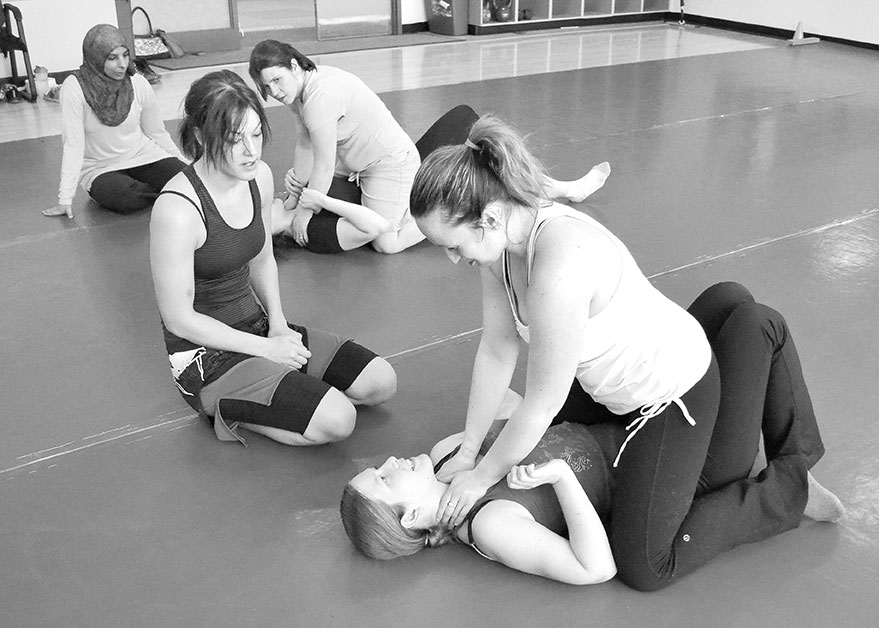 During the month of February, the Algonquin Impact Zone hosted free women’s self-defense classes every Monday and Wednesday.

The classes were open to any and all women at the college and covered some of the basic methods that are commonly used in self defense.

The laughter and good nature that came across in the class made the training seem more fun than what it was preparing the women for. They were taught about using body awareness against their attacker in instances when there is a significant size difference, when an assailant pins them to the wall, the ground, or won’t stop pursuing them.

“You don’t get the reality until you’re in the situation,” said instructor Sandra Lanois-Bazinet. “No one picks a fight they think they’re going to lose.”

The classes were varying in sizes from two people to 12 people throughout the promotion month,       with different women attending every week, despite the course being a progressive one.

Lanois-Bazinet, a student in her fourth year of the e-business supply chain management program, has been involved in martial arts since she was 12. She is currently a second-degree black belt Can-Ryu Jiu-jitsu, a blue belt in Brazilian Jiu-jitsu, and a practitioner of both kickboxing and Muay Thai.

“I started it because whenever I come to these classes, there are never any women,” said Lanois-Bazinet. “I think they’re intimidated by the men and high intensity.”

The classes will continue, but will only be available to people with subscriptions to the Impact Zone.

“It was really fun, but it’s too expensive to continue,” said alumni students Nicole Summers and Kaylee.