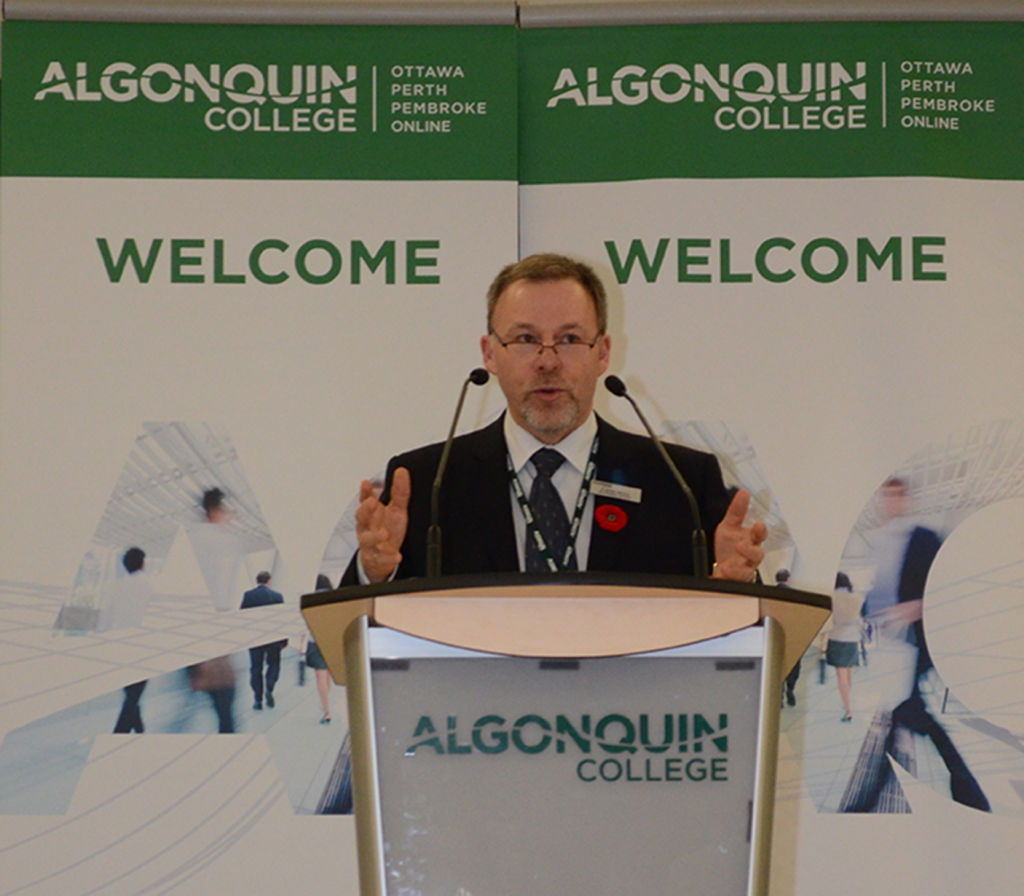 Claude Brule presents the International Strategic draft plan at the town hall meeting on Nov. 8. This plan was conducted by Algonquin about their plans to attract international students and expand overseas.

Algonquin’s Saudi Arabia campus, a burning topic of discussion, doesn’t seem to be extinguishing any time soon as more questions than answers are still being raised.

On the heels of Algonquin’s first international strategic draft plan presentation on Nov. 8, which drew several questions from faculty about the college’s intentions in Saudi Arabia, Jack Wilson, professor in the police and public safety institute, is pursuing the matter further.

Wilson has since sent a press release to city media and the Ontario government asking for intervention on this matter as the first vice-president of the Ontario Public Service Employees Union, local 415.

The press release was sent to Premier Kathleen Wynne and Minister Brad Duguid and member of the legislative assembly of Ontario, Tim Hudak and his opposition asking them to look into the appropriate measures by which any publicly funded institution, what the criteria is, what is deemed to be an acceptable partner and what isn’t.

And that’s something, according to Claude Brule, vice-president of academic, said was an issue raised and addressed at the town hall meeting.

“I think we had some clarity of where those opportunities could be in terms of the criteria that we put in that plan,” said Brule. “We also look at, and I think I explained that in the town hall, that when we have a request coming in let’s say from a potential partner or from a host country who wishes to work with us on an international opportunity, an international educational opportunity, we undertake some questions with them.”

Wilson also wants to know how a public institution can open a campus overseas without a rubric for going is not readily available. He wants the college to answer the question of what the criteria should be for opening the Jazan campus.

“And that’s what I said in the town hall, is that the question that are being asked depends on the model that’s being selected or what the host country wants from Algonquin College,” said Brule. “So that’s why there’s no one set rubric that says ‘okay, in all instances do this.’ I’m not sure rubric is the right word anyway. “

In fact, employees haven’t approached Wilson to suggest that his intentions are to attack the college. Many who have contacted him are appalled at the college and find it reprehensible, distasteful and disinviting that business is being done with this country.

“It’s the Algonquin reputation and brand. People take great pride working for an institution that holds caring, integrity and respect,” said Wilson. “Well, how could we be that when we look on the web masthead, it says Algonquin College and lists not three but four campuses: Ottawa, Perth, Pembroke and now Jazan. And I don’t see Jazan as being in the same league as the Ottawa campuses. We don’t share the same values in any respect.”

Jennifer Monk, a professor of marketing and management studies, spoke up at the recent town hall meeting and questioned the lack of transparency and decision matrix involved in the Jazan campus. Her concern was acknowledged by Brule, but it wasn’t quite the answer she expected.

“There wasn’t a lot of direct answers to the responses but I felt satisfied that it would be addressed in a future meeting,” said Monk.

Another one of her concerns was that this plan was only being discussed after the campus opened. Monk would have preferred if employees were part of the discussion process before it was already built and hopes that the process would change in the future.

“I think definitely these discussions offer opportunities to further expand and develop the plans in the future,” said Monk. “So it would be good to have these discussions earlier on in the planning phase as opposed to the plans already being launched and the campus is already set up.”

Given the amount of negative press coverage that the Jazan campus has amassed, the college might be concerned about potential questions arising from parents or prospective students about this matter.

However, according to Ann Kalil, manager of recruitment at the college, no questions have come up and no one has voiced anything to her or her staff that have been on the road for over eight weeks now. Kalil attended the Nov. 8 meeting in order to get some more information about the matter.

“It hasn’t yet so that’s why I poked my head into it a little bit beforehand,” said Kalil. “I wanted to make sure if it did happen, you know what the background is. We don’t always see the background and everything. There’s a lot of people involved and different departments.”

In the end though, there is no clear-cut solution to the Jazan campus and to Algonquin’s reputation while being in the country. However, proposals have been made by Wilson.

“What I proposed to the government was, we would like them to intervene, to establish what is an appropriate type of relationship that we should be entering into by setting up guidelines with respect to human rights,” said Wilson.

“And that there should be a hold on any further partnerships until we have those guidelines, particularly countries where we know that there are serious human right violations.”