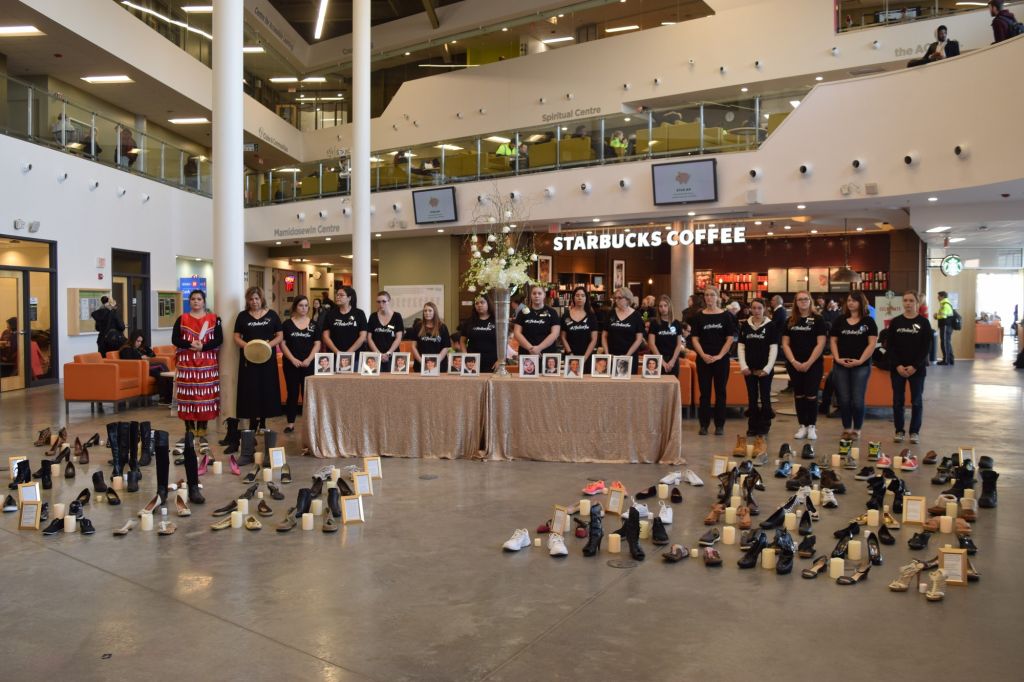 Student and staff volunteers stand behind a shoe vigil and shrine to the 14 victims of the 1989 L'Ecole Polytechnique massacre in Student Commons, Dec. 6.

“It gave me goosebumps. Walking around the school knowing that we’re doing what we can for them, creating awareness, it was a great feeling.”

The words were spoken by first-year practical nursing student Courtney Rett-Mcdougall as she described the feeling of wearing a red jingle dress leading the procession of staff and student volunteers walking the halls of Algonquin on Dec. 6.

The procession was to honour victims of, and raise awareness for, intimate partner violence, as well as to commemorate all missing and murdered aboriginal women.

It was part of a joint event by Algonquin’s Project Lighthouse and the White Ribbon Campaign commemorating the National Day of Remembrance and Action on Violence Against Women, celebrated every year to mark the anniversary of the 1989 L’Ecole Polytechnique mass shooting in Montreal.

At 11 a.m. Sarah Crawford of Project Lighthouse opened the floor for Kevin Vowels from the White Ribbon Campaign. Vowels addressed the group of volunteers and the Student Commons as a whole, commending Project Lighthouse and Algonquin for the work they’ve done on sexual violence.

The procession featured 14 student volunteers holding photos of the 14 victims of the L’Ecole Polytechnique massacre. Lead by Rett-Mcdougall in the jingle dress and Tunute drumming, they walked from Student Commons across campus to ACCE building and back. On the way, two members of the group handed out ribbons and information cards for the White Ribbon Campaign.

“I think it’s very important,” said Aboriginal studies student Sarah White as she took in the shoe vigil. “We need to learn from society…and we need to come together to support men and women who are victims of sexual violence.”

Her sentiment was echoed by Algonquin College President, Cheryl Jensen, who made an appearance after the procession to thank the volunteers and organizers.

“This is such an important remembrance of an event that happened 28 years ago but is absolutely engrained in all of us, in our hearts and our minds” Jensen said. “I’m just very proud of Algonquin, our staff and the women who work here.”

The shoe vigil was moved to residence after Student Commons to reach even more students.