Vet techs get their paws dirty 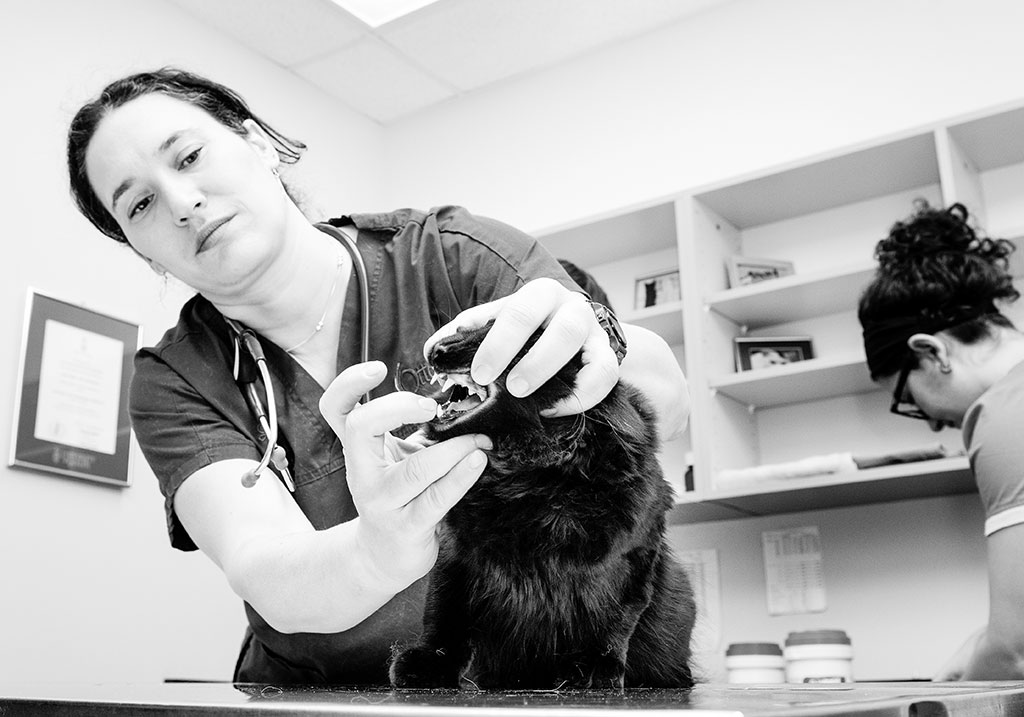 The front lines of cat population control can be found in the operating room of a Nepean vet clinic.

And Algonquin students are among the troops.

Daniela Gambarotta, a second-year veterinary technician student, gently cradles an unconscious orange tabby, placing him on the stainless steel table. With the beat of the heart rate monitor keeping time, the neutering begins. Within 30 seconds, Ottawa’s streets are spared from yet another litter of unwanted kittens.

Gambarotta is one of 46 second-year veterinary technician attending rotational placements at the City of Ottawa’s Spay/Neuter Clinic.

The new practical component, which has been underway since Jan. 13, sees level four vet-tech students performing their skills during a combined, real-life experience of pre-op, surgical and post-op procedures.

The clinic’s director and resident veterinarian, Dr. Jennifer Messer, initiated the partnership. So far, both the students and their instructor have been more than pleased.
“I have just been thrilled with their performances,” said Messer. “These gals are all enthusiastic, professional and obviously incredibly well-educated.”

Messer recognizes the importance of placement opportunities when used to supplement the classroom instruction students are already comfortable with.
“They need placements,” she said. “Here they’re able to practice animal handling, weighing
patients, taking temperatures and participat[ing] in surgery like playing the role of an anesthesia technician.”

The placement rotation works by providing every vet-tech student with two sessions, one day after the next.

Both Gambarotta and Amber Lindsay, another second-year vet-tech student, entered the clinic for the first time on Jan. 27.
Shadowing Messer, both women assisted with pre-op exams by warming up heating pads, lubing animals’ eyes and checking heart rates.

“They give you a lot of chances for hands-on stuff and are very helpful in teaching you everything,” said Gambarotta, while trimming the nails on the morning’s first feline patient.

With a learning environment outside of the traditional classroom available, the students’ reactions have been filled with excitement and enthusiasm.

“You can tell there is extra energy in the building,” said clinic coordinator Allison McLean. “The staff is excited too because these students can potentially show us stuff they’re doing and what they are capable of.”

For those who had already completed their two shifts, like second-year student Kristine Emslie, the extra practice placed her miles ahead of the competition.

“Because I wasn’t being graded for it, I was able to actually place the catheter and endotracheal tubes whereas I was nervous my first time at school,” said Emslie. “I was happy being in the field, knowing this is definitely what I want to do.”

However, the new setting wasn’t the only difference from the classroom.

There was now the added challenge of meeting a concerned public’s expectations.

“Most of the time, the client has a good reaction because we let them know the students aren’t doing anything they aren’t supposed to be doing,” said McLean. “That’s usually where an owner may be a little bit worried because their pet is like their child.”

One of the morning’s first clients, Kimberly O’Connor, was filling out the paperwork for her two cats, Max and Poe, when she was informed that students would be sitting in on her cats’ surgeries.

“I know Algonquin is taught hands-on and that is what I saw here with the students helping out and working alongside the vet,” O’Connor said. “I actually feel more safe.”

O’Connor said she chose to bring her cats to the city’s clinic because they operate at a reduced fee. As a revenue-neutral program, the facility’s costs are recovered through the fees clients pay. Yet, Messer says the lower price does not compromise the level of treatment.

She is proud the clinic is now associated as an instructional medical institution because it speaks to the quality of the care patients receive.

“The college’s welfare committee came through here to inspect us and they were thoroughly impressed with the pain control and animal protocols,” said Messer. “I won’t hesitate to toot my own horn about that.”

But the professional environment and higher stakes didn’t seem to bother Emslie.

Despite the intensity, she performed her skills correctly and without issue.

“I was nervous at first because I didn’t know what to expect,” she said. “But once I actually started doing the procedure, I gained a lot more confidence.”

Lisa Langton, coordinator of both the veterinary technician and assistant programs, agrees. She says students like Emslie have created a foundation for themselves, a vital ingredient for future career success.

“For students to go out, in a new facility where they don’t know anybody and perform these skills with confidence and efficiency while impressing this new group of professionals,” Langton said. “I’d like to think the students can walk away being proud of what they have done and recognize that they can do it.”