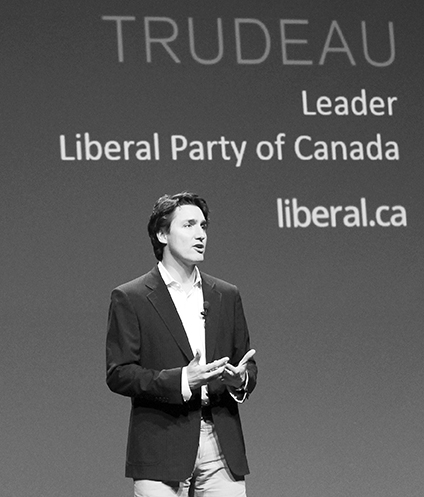 Trudeau lets students know their voices are heard. He comes to the college to answer any questions the students may have.

Cheers of “we want Justin!” erupted in the Student Commons on March 28 as a sea of red anxiously awaited for the leader of the Liberal Party, Justin Trudeau to take the stage.

In a refreshing, no-limits question and answer session, students quickly gathered to the microphones to pick apart Trudeau’s brain, including a variety of topics like military spending and his favourite Canadian artists.

Throughout the entire presentation Trudeau’s message was clear: young adults are much more informed and engaged than we give them credit for.

“This reputation that young people have about being apathetic is completely misplaced because even though from time to time young people will throw their hands up and say ‘I don’t want to get involved, I’m not interested in that.’” It’s not a reflection on how they feel about the world,” said Trudeau.

Trudeau doesn’t believe that young people disconnect from politics because they don’t care but because they often feel like their voice isn’t heard and stepping away in discouragement.

As a teacher himself, Trudeau values the power of education maintaining that “seven out of ten jobs of the future are going to require some form of post-secondary education including and in many cases especially trades,” said the Liberal party leader. “We have to start aiming for 70 per cent attainment and colleges have a huge role to play in this.”

Trudeau believes that passion should be the sole motivator when it comes to choosing the right career path. Often people choose otherwise due to societal influence, not necessarily careers that are best suited for them.

Trudeau used his six-year-old son’s fascination with cooking as an example.

“Every time we go to a restaurant he wants to know if it’s a restaurant he can see into the kitchen,” said Trudeau. “I have high hopes that he’s going to become a chef.”

Trudeau reflected back on his time in university agreeing that the most influential experiences were those spent outside the classroom environment.

Some of Trudeau’s fondest memories were surrounded around the clubs he was involved in and where he learned to have a positive and strong impact in society.

He emphasized that student associations are hugely important to campus life because it not only provides opportunities for leadership, but it also provides a voice for the student body.

Though deciding to follow in his father’s footstep, Trudeau’s father taught him to most importantly make decisions for himself, especially with his involvement in politics and the Liberal Party.