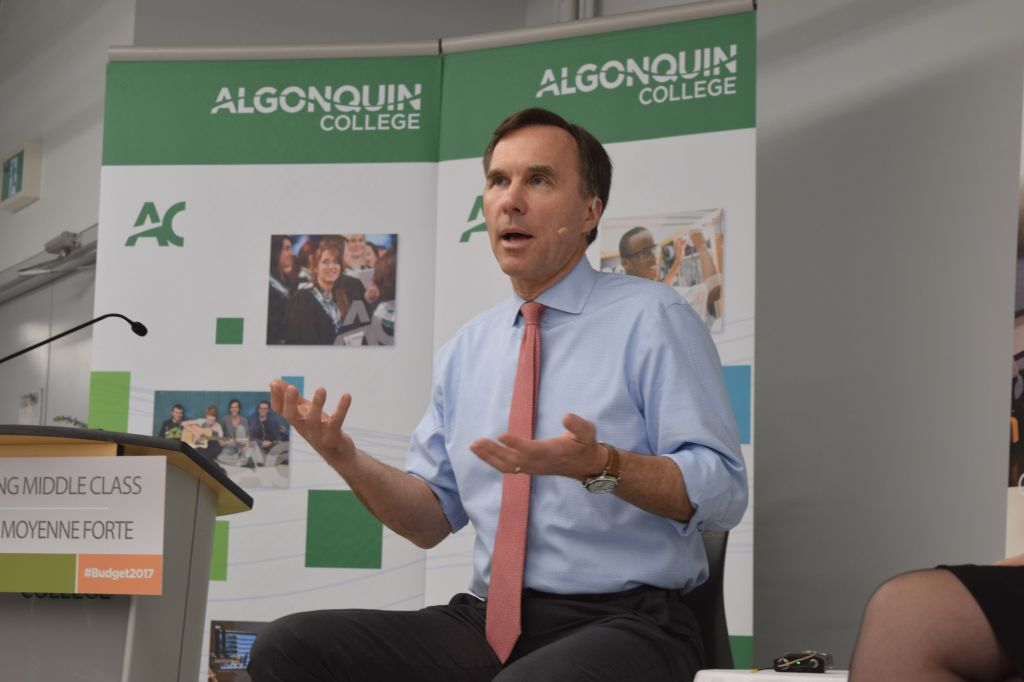 The federal government eliminated the public transit tax credit in the 2017 federal budget because it wasn’t working, Finance Minister Bill Morneau said during a March 23 visit to Algonquin College.

In response to a question later in the event, Morneau said that the 15 per cent non-refundable tax credit was originally introduced in 2006 by the Harper government to encourage more people to take transit. That wasn’t happening, so the government cut it.

Instead, he said, the government will provide $20.1 billion in transit cash to provinces and territories over the next 11 years.

Morneau said the budget has a focus on innovation and entrepreneurship. “For us it’s really a step in a long term plan,” he said.

It’s about investing in education that focuses on providing skills for an uncertain future. “People are worried the things in the future might not be as good as in the past,” he said.

He toured the F-building’s innovation lab, checking out a virtual reality 3D modeler, developed by Brinx, and a data visualization tool.

“It was really neat (to meet Morneau),” said Alex Papineau, an Algonquin game dev graduate who now works at Brinx. “It’s very pleasing that our work is being recognized.”

Papineau said that Brinx has many employees who graduated from Algonquin that worked on the modeling system.

“When it comes to 3D modelling it’s very difficult to get into it,” he said. “It’s very intuitive to jump into our program and start making stuff.”

Algonquin president Cheryl Jensen and Students’ Association president Egor Evseev both told the Times they have positive reactions to the 2017 budget.

“I’m very pleased with the budget,” Jensen said. “The focus on innovation is exactly aligned with (Algonquin College).”

“I think from what we’ve seen the government is very committed to developing skills to make sure students get jobs,” said Evseev. “Here at the college (the federal budget) does affect us.”

The dozens of students who turned out to hear Morneau speak is indicative of their engagement with government policy, said Anita Vandenbeld, the Liberal MP for the Algonquin College area.

“We have one of the most informed generations,” Vandenbeld said. Students are often criticized for not engaging in politics, but she said that’s because they prefer policy to partisanship.

Vandenbeld hosts public town halls in the Student Commons AC Hub every Friday at 5:30 p.m., and said she always has students coming in and telling her their thoughts on what the government is doing. She said her job is to amplify students’ voices on Parliament Hill.

“If they talk to me about things that can help make an impact.”