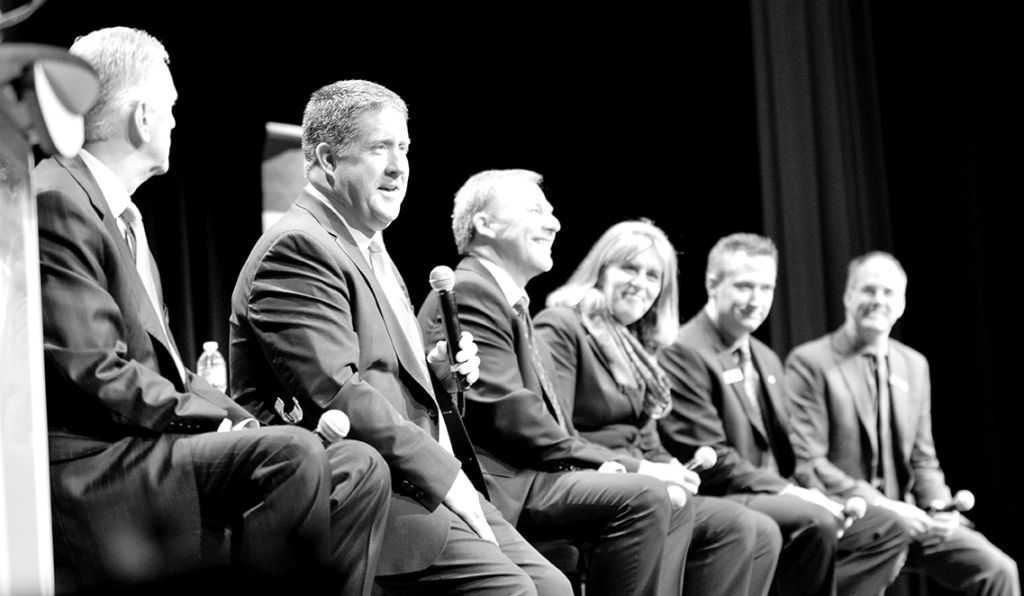 President Kent MacDonald and the president’s council answer questions in a light-hearted town hall meeting. The meeting is also one of the last opportunities for MacDonald to meet with most of the staff in one place before his departure to St. Francis Xavier University.

When most are allowed the opportunity to be open and honest with their boss, it doesn’t result in a standing ovation. But that’s exactly what happened during the town hall meeting held on March 25 in the Student Commons Theatre, where staff congratulated Kent MacDonald, president of Algonquin, for his commitment to communication and transparency at the college.

MacDonald and the president’s council addressed any question staff had on their mind during the meeting. With MacDonald recently announcing his departure from Algonquin, one staff member decided to address the “elephant in the room,” asking how the college could continue to move on in the direction he had set.

“My hope is that our culture will drive us forward on this front,” MacDonald said.

“We committed to build a new kind of snowball here and have pushed it over the edge. By having these types of forums and being more transparent, the snowball is moving down the hill and getting bigger and stronger and I don’t think it’s going to stop.”

Gerry Barker, vice-president human resources, reassured the crowd that the board was meeting on March 28 to begin planning an executive search across North America to find to best possible candidate for succession.

Another question asked of both MacDonald and Claude Brule, vice-president academic, was on whether Algonquin and St. Lawrence College were planning on saving programs from the soon-to-be-closed Kemptville College.

“Algonquin cannot be viewed as the savior of that campus. St. Lawrence and Algonquin are on the same page and if we can do something good for us, hopefully it will be beneficial for the people of that region,” MacDonald said.

Other questions were related to a need for clarity on where students were supposed to go for certain services, such as support and various information technology needs. Compared to the first town hall meeting which centered on funds not being used correctly, out-of-date equipment and lack of training for staff with etextbooks, the mood has been much more positive.

“The tone of questions today, I want to know more so I can contribute to this organization, that must continue,” said MacDonald.

A survey conducted after the first town hall meeting showed that 98 per cent of those who attended viewed it as a positive way to communicate with staff.

“It’s a good forum for faculty and staff to ask questions. It allows for an open dialogue between staff.” Josh Gleeson, an employee who works in the registrar’s office said.

In one of his final addresses to the entire faculty, MacDonald told a story about an elderly couple who greatly influenced his leadership style. When he asked them how they had stayed together so long, they gave him a simple answer.

They said “Just be nice to one another.”