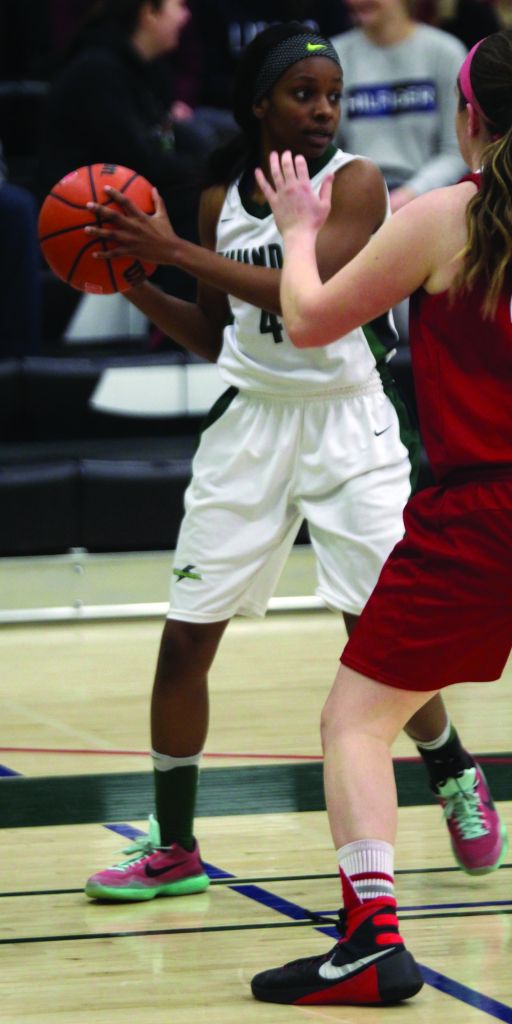 The Algonquin women’s basketball team has clinched a berth in the OCAA playoff quarterfinals after defeating the Redeemer Royals 80-72 in the crossover game on Feb. 25 at Algonquin.

It was a highly competitive, fast-paced battle from start to finish, as both teams knew it was do or die coming into this one.

“I’m very proud of my team,” said Algonquin guard Jeylinh Bui. “Coming into the game we all knew this might be the last time we all played together it was really important for us to have a good game.”

Algonquin’s Amoney Abakar’s ability was put on display, as she proved herself once again as one of the most dominant guards in the OCAA.

She shot a near-perfect 11-13 from the field, hitting four from beyond the arc and also racked up a game-high eight rebounds.

“She’s a tough a player,” said Redeemer head coach Robert Hooper. “I had to ask my players during one of the time-outs: How is it that the shortest player on the court is getting more rebounds than anybody; that doesn’t make any sense. We tried to get the ball in her hands as much as we could, because she’s at her best when she works off her teammates.”

The Royals’ game plan didn’t exactly come to fruition as Abakar dropped a team-high 29 points with Lauren Tebrake contributing 21 points of her own a respectable 9-16 from the field.

“I felt good. I was just as confident in myself as I was in other games,” said Abakar. “Anything they gave me I was gonna take it. That’s just the way it is.”

The Thunder didn’t start off quite the way they anticipated, as they failed to make shots early allowing the Royals to go on an 8-0 run to begin the game.

But Algonquin rallied back and brought the deficit to just three points by the end of the first quarter.

“We have a very young team,” said Algonquin head coach Laura Bond. “I think we just needed a couple minutes to take a deep breath. But once we we’re composed we finally got things together.”

Algonquin finally imposed its will in the second and third quarters, as they held the Royals to just 14 points in each period.

Going into the fourth quarter, the Thunder was leading 57-46 and looked poised to make it to the next round of the post-season. But nothing is ever guaranteed, especially at this time of year.

The Royals made a convincing push in the final frame putting up 28 points collectively; with superstar guard Jessica Brown sinking one great shot after another.

Brown ended the game with a game high 38 points shooting 15-30 from the field with five threes. But it wasn’t enough for the Royals, as Algonquin was able to make clutch baskets of their own to close out the affair.

“We just wanted to make it hard on 23 (Brown) and I think we did a good job of that,” said Bond. “She made a lot of tough shots, but we just thought that as long as no one else went off on us we we’re gonna be fine.”

For their next game, Algonquin travels to Seneca College, to take on the Fanshawe Falcons in the quarterfinals of the OCAA Championship on March 2.

The two teams, who have yet to face each other this season, seem to match up quite nicely, as the Falcons finished their regular season in third place in the West Division with a 12-6 record, which is almost identical to Algonquin’s.

“We’re very excited to go to playoffs,” said Bond. “At this point every game is a grind, but we just have to be prepared no matter who we’re playing next.”