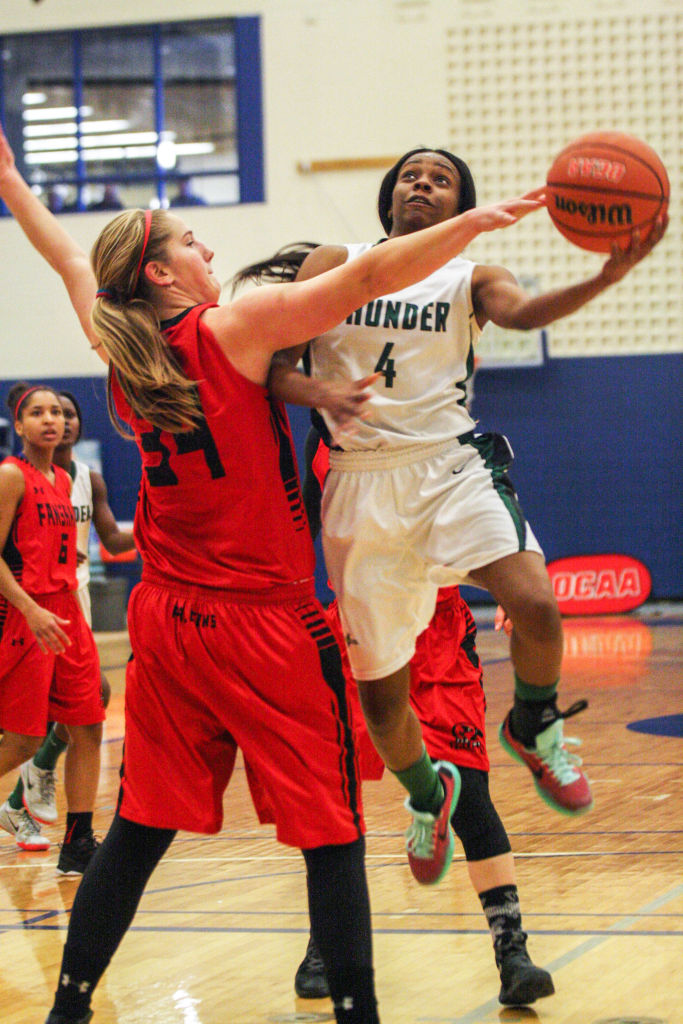 The Thunder ended the OCAA Women’s Basketball Championship with a disappointing fourth place after a terrific 12-2 season record and a first place finish on top of the East division.

After winning their first game, the Thunder were set to face the Mohawk Mountaineers in the semi-final game to see who would play for gold.

The Mountaineers entered the game against the Thunder with three straight gold-medal game appearances. When it comes to championship games, experience is essential. This was one thing the Thunder didn’t have, with no veteran players on their squad.

Even without any experience, the Thunder grinded the game out with the Mohawk veterans, forcing an extra quarter. Laura Bond, head coach of the Thunder, said that they match up really well to Mohawk because they are similar in many ways. Their main focus going into the game would be eliminating unforced turnovers.

But what started as a blessing quickly turned sour for the Thunder as the same rookie mistakes that plagued them throughout the season quickly turned the matchup against Mohawk into a disenchanting experience.

They blew a gigantic 13-point lead against the Mountaineers coming into the third quarter as they were outscored 29-13. Regardless, the game would need an extra quarter to decide the winner.

In overtime both teams went back-and-forth and with 10 seconds left, guard Nya Gathoth, drove past two defenders and scored to tie the game. It left just enough time for Mohawk to get another chance.

The Mountaineer’s Katelyn Arbour received a pass in the dying seconds of overtime and drove to the basket, but was fouled by forward Katie Flansbury with one second left on the clock, allowing her two foul shots.

Everyone in the gym went silent as they awaited the undeniable upset that was about to occur.

Arbour missed her first shot with it bouncing off of the left side of the rim. On the second shot, Algonquin wasn’t as lucky. The game was secured by Mohawk with no time left for the Thunder to make one last scoring attempt.

They lost the game 88-87, sending Mohawk to the gold-medal game and forcing Algonquin to face the Fanshawe Falcons for bronze.

Unfortunately, the Thunder’s OCAA Rookie-of-the-Year Jeylhin Bui fouled out 22 seconds into overtime after already completing a double-double with 18 points and 10 rebounds in regulation.

“Jeylhin is a great player and we had a game plan against her, sometimes it worked and sometimes it didn’t – great players make great plays,” said Mohawk’s Head Coach Kevin Duffy. “They have lots of dangerous scorers on their team, just like us, but obviously them losing her in overtime was a big loss for them.”

The battle for bronze was the Thunder’s game to win through the first three quarters, but the same reoccurring theme of the regular season troubled them in the fourth quarter – turnovers.

In the game, the Falcons stole the ball an outstanding 27 times and forced the Thunder to turn over the ball 37 times, with 12 of them in the fourth.

“Our focus right now is to not let them get on any runs and we are going to try and stop them as early as we can,” said guard Amoney Abakar at halftime. “We don’t want them to score and catch up like the first two games.”

Despite their goal, the final quarter was brutal as nothing went right for the Thunder. They were outscored 26-6 and they shot 19 per cent from the field.

In the end the Thunder fell to the Falcons 67-56, taking away their chance at a medal. Although they lost, the Thunder are looking forward to a bright future.

“We’re the only team with no veterans this year and we could probably have the same team for the next three seasons – minimum – which is awesome,” said Bond. “We’re definitely in the right direction and we’re hoping to be in the mix every year.”

They had strong start to the tournament against the hosting team, the Niagara Knights, with momentum on their side going into the semi-final matchup versus the Mohawk Mountaineers.

They may have won against the Knights but barely escaped the third quarter after blowing a 13-point lead. Luckily, they won the game 70-56 by outscoring Niagara 23-11 in the fourth.

Niagara out-rebounded and overpowered Algonquin throughout the game, but they were no match for the speed of the Thunder. Jeylhin Bui scored 19 points in the game, had three rebounds and four assists to help guide the Thunder to victory.

Bond attributed the win to composure after almost blowing the game in the third. “They are going to fight back — it is their own gym – and have pride,” said Bond.

The tournament took place at Niagara College on March 3-5 with the Humber Hawks taking the gold-medal in the final game.

The Thunder ended the OCAA Women’s Basketball Championship with a disappointing fourth place after a terrific 12-2 season record and a first place finish on top of the East division. After winning their first game, the Thunder were set to face the Mohawk Mountaineers in the semi-final game to see who would play for […]

The Thunder ended the OCAA Women’s Basketball Championship with a disappointing fourth place after a terrific 12-2 season record and a first place finish on top of the East division. After winning their first game, the Thunder were set to face the Mohawk Mountaineers in the semi-final game to see who would play for […]