Thunder’s comeback screeches to a halt 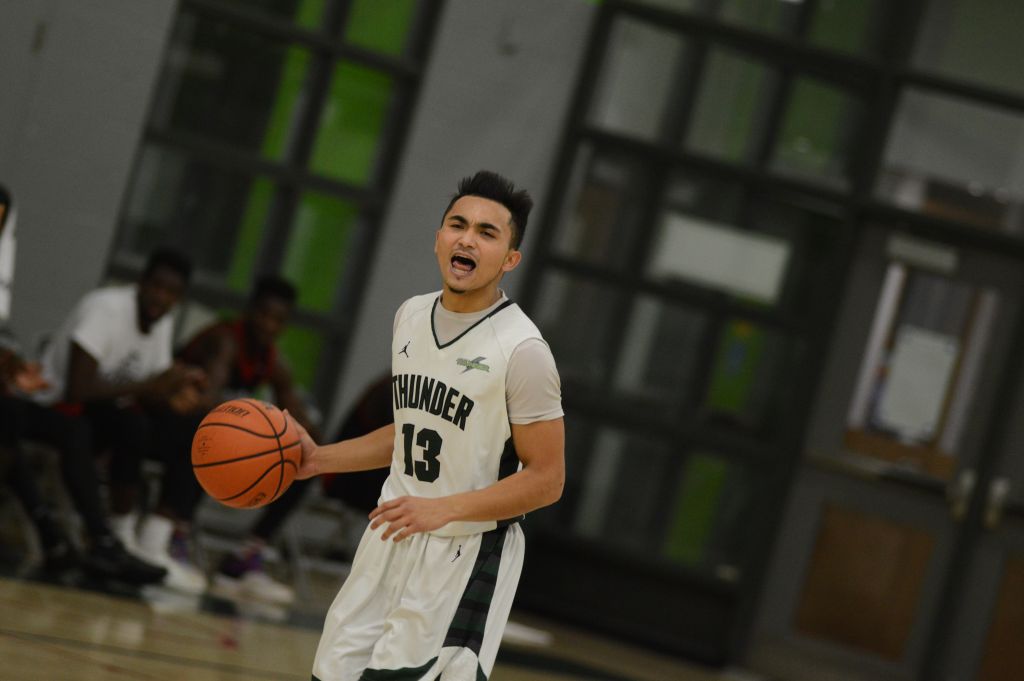 The Thunder men’s basketball team’s apparent comeback has screeched to a halt after suffering two consecutive losses to the Loyalist Lancers and St. Lawrence Vikings over the weekend.

The team was unable to maintain the momentum displayed during last week’s back-to-back wins at home as they played the Vikings in Kingston on Nov. 19.

While playing St. Lawrence in Kingston on Nov. 18, the game was tight all the way through, but by the final buzzer, the Thunder were unable to pull ahead of the Vikings, capping the game at a tight 73-70.

Algonquin played a steady game, keeping a consistent pace throughout and nearly evening out the score by the end of each quarter. They inched ahead in the third period with 14 points to St. Lawrence’s 9, but the Vikings managed to even things out in the fourth quarter.

The tone was similar during the previous night’s game in Belleville against Loyalist, where the Thunder were just barely able to outscore the Lancers, ending the game at a close 72-75.

Algonquin’s performance was a stark contrast to the improvement displayed during their previous two games.

The Thunder dominated the Grizzlies at home on Nov. 12, finishing the game with a score of 81-50.

They came on strong right off the bat, outscoring the Grizzlies 19-9 by the end of the first quarter.

They were able to maintain their momentum which generated a halftime lead of 43-21.

Coming into the third quarter, the Thunder continued to attack their opponents, earning them 60 points. By the end of the final quarter, they dominated the Grizzlies with a whopping 81 points.

They may have come out victorious, but the team’s strong performance was not mirrored during the previous night’s match against the Canadore Panthers.

Algonquin still managed to secure a win on Nov. 11, but it didn’t come easy.

Although they performed well in the first half, the game was tied up 19-19 by the end of the first quarter.

With the Thunder barely leading 33-31 by halftime, the message was definitely tense.

“I kind of lost it at halftime,” said head coach, Trevor Costello. “We’ve got to defensively, offensively be better.”

Things improved in the second half of the game, with guards Kristian Charette and Mike Soy leading the team in scoring, going three for seven from behind the three point line.

By the third quarter, the Thunder led the Panthers 58 to 51.

Turnovers were problematic at certain points, but Algonquin managed to pull it together with five points off back-to-back turnovers – including a massive three pointer – in the final 45 seconds earning the Thunder an 81-74 victory.

With only six returning players this season, Costello believes that the team’s rough patch comes down to their newness.

“We kind of of started something new defensively this week, so we’re still in training mode I suppose. But there were some positives out of the defensive stances. We’ll get there,” said Costello after the Thunder’s win on Nov. 11.

“We really got lucky tonight. We’re a good shooting team so we got to make sure we get hands up on shots and just gotta be ready.”

The Thunder will play their final home games of the fall semester when they host the Fleming Knights on Friday, Nov. 25 and the Durham Lords on Saturday, Nov.26.