You are here: Home / Featured Stories / News / The poppy man of Algonquin 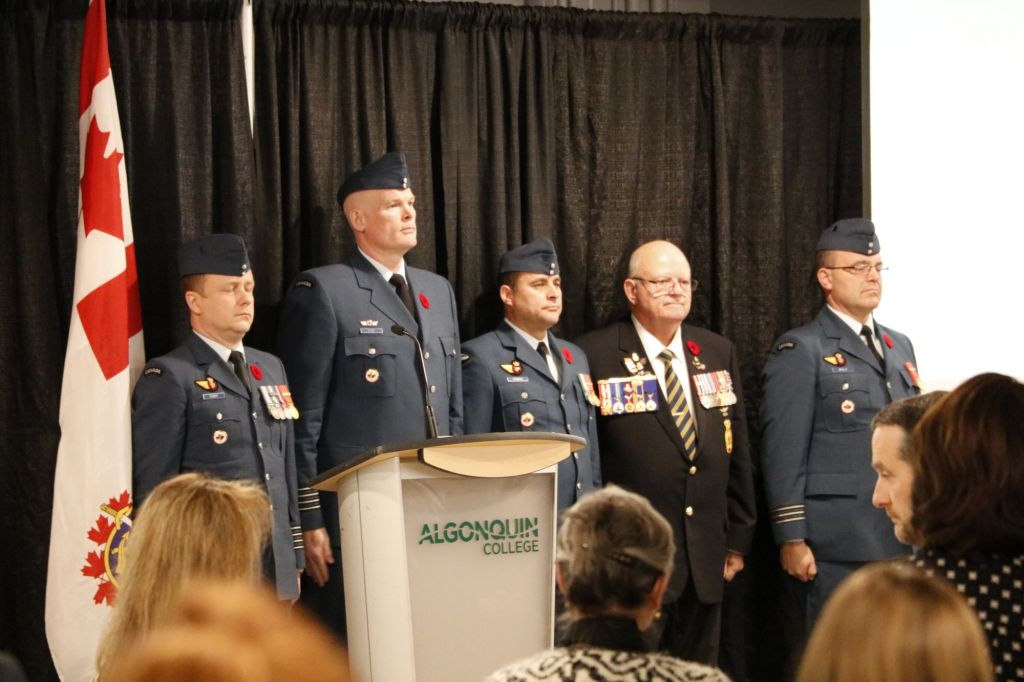 If it weren’t for the dazzling rows of medals and awards pinned to his chest, David Carty would appear to be just another friendly face in the crowd.

The 72-year-old blends his love for conversation with a good-natured, honest humour as he sits at his table in the Algonquin food court. As students stop to speak with him, he shares with them a grandfatherly level of experience and wisdom.

Carty served in the military for just over 20 years, retiring as a Captain. He has done tours with the United Nations, worked operations with NATO, saw involvement against the Front de libération du Québec in the ‘60s and served as security at the ’76 Olympics. He has taken part in survival training across the arctic, jungle training in Jamaica and counter-terrorism training in the United States. He’s jumped out of planes, worked with military guards in England, trained as a drill instructor and as a weapons instructor.

Now retired, Carty has spent the last three Novembers in the Algonquin food court, manning the Royal Canadian Legion’s table as he converses with students and trades donations for poppies.

“One day the good lord said to me, ‘Your body ain’t gonna take much more of this’,” Carty said with a laugh. “My doctor – my team of doctors, I call them – lead me to the healthy individual that I am today. Because of that, I’ve been able to devote more time over the past few years to doing stuff like this, and now I’ve been at Algonquin for the last three Remembrance Days.”

Carty’s primary goal is to spread awareness to students about why we practice remembrance. Whenever a student stops to speak with him, he discusses the history of Canada’s military traditions as he helps them discover their own family’s military heritage.

“There are a lot of reasons I come to Algonquin. I’ve got an interactive, two-way street that I can use to get into a discussion with the students. They probably don’t know or can’t imagine what their family’s history may be in looking after their country,” said Carty. “It’s an education for me to listen to their stories. I invite them into the remembrance process and the whole ceremonial rational behind it, so that they can recall their own history with favour and respect.”

“With anybody that walks across my table who I see looking at me, I see the questions in their mind. I say ‘come on over, I can see you’d like to know what this is all about’, and then start a conversation. And the next thing you know they’re walking away wearing a poppy, because they realize they can join us in our act of remembrance.”

The Algonquin ceremony not only highlighted that sentiment, but the need to remember and commemorate the men and women who served and died in Canada’s major conflicts.

Armistice Day — today known to us as Remembrance Day — was first marked on Nov. 11, 1919 when the agreement to end the First World War was signed between the allies and Germany.

Algonquin commemorated that day when hundreds of students and staff attended the celebration of freedom that was made possible with the courage of fathers, grand fathers, friends and relatives of the audience.

Deijanelle Simon, Students’ Association president, paid tribute to those who served the country in war time.

Freedom and peace became possible because they gave of themselves in wartime.

“It is thanks to their courage that we can live in peace,” she said. “We are enjoying all the wonderful benefits of living here in Canada.”

Along with other honorary guests who paid tribute to the soldiers of war time, David Bromley, the coordinator of the graphic design program, was invited to lay a wreath for the two of his great uncles and all of those who served during the war time.

The poppy man of Algonquin Reviewed by Trevor Oattes on November 20, 2018 .

If it weren’t for the dazzling rows of medals and awards pinned to his chest, David Carty would appear to be just another friendly face in the crowd. The 72-year-old blends his love for conversation with a good-natured, honest humour as he sits at his table in the Algonquin food court. As students stop to […]

If it weren’t for the dazzling rows of medals and awards pinned to his chest, David Carty would appear to be just another friendly face in the crowd. The 72-year-old blends his love for conversation with a good-natured, honest humour as he sits at his table in the Algonquin food court. As students stop to […]