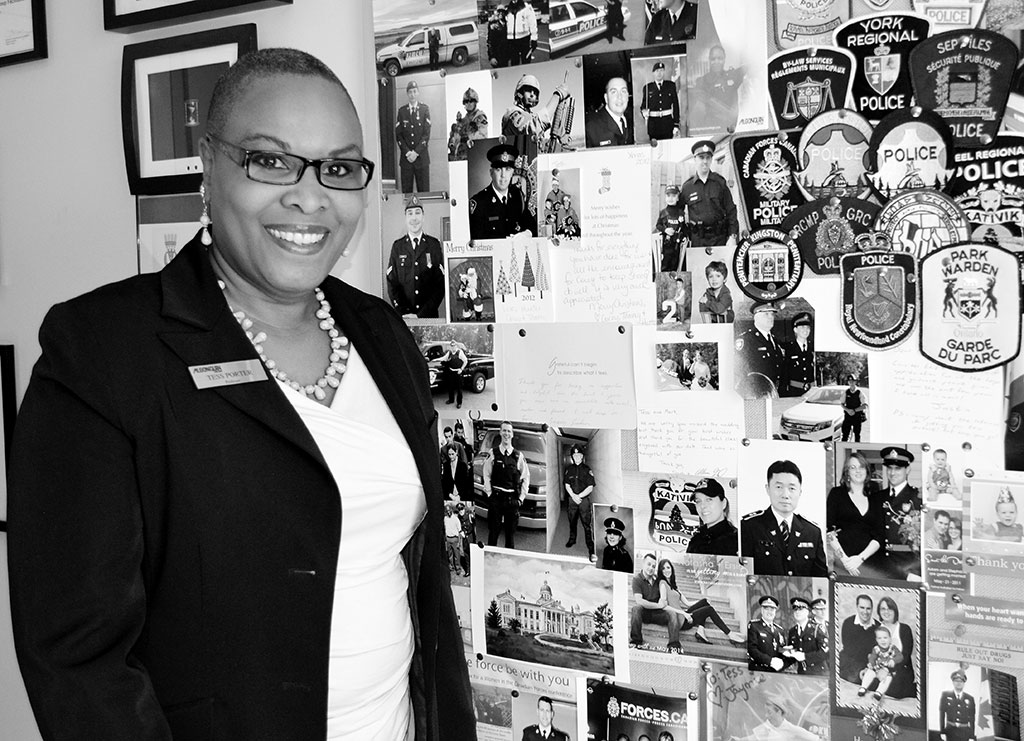 The Community Hero of the Gamewas awarded to Algonquin professor and second-year coordinator of the police foundations program, Tess Porter, for her philanthropic efforts and ability to inspire others to give.

Porter, a graduate with honours of the program she now teaches, also has a degree in Advanced Police Science from Algonquin as well as Conflict Studies from St. Paul’s University.

She says her reason for joining the police force “comes back to giving back.” While working full-time as an officer, she taught part-time and also had various guest speaking spots. Once the opportunity arose to become a full-time professor, Porter believed the choice was easy.

“With teaching, you can help in another way,” she said.

Every year Tess assembles her students, current and former, to make Christmas baskets for the Youville Center. The center “helps young single mothers provide a brighter future for themselves and their children,” according to the website. The baskets can include toys, food and gift certificates.

Porter has also received the Students’ Association (SA) Faculty Recognition Award, given to professors by students to “show their appreciation to faculty members who, in their opinion, made a significant difference during their stay at Algonquin College.”

Porter said that activities such as the Christmas baskets “always extend to alumni,” however a formal invitation is never needed, as former students will voluntarily reach out to her to lend a hand. A large corkboard is hung up in her office filled with pictures, holiday cards and letters from former students, all containing a personal sentiment. The display, combined with her SA award, shows the lasting impact she has on her students.

Outside of the college, Porter volunteers with several other Ottawa-based groups. These include the Boys and Girl Club, Big Sisters of Ottawa Carleton, and the Police Youth Mentoring Program. She also currently sits on the Board of Directors for the Children’s Aid Society and the Queensway Carleton Hospital.

She has donated money, food, time and happiness back to our community, but perhaps her greatest donation is the gift of life. The Trillium Gift of Life Network awarded her a Gift of Life medal for her act of kindness of being a living organ donor.

Porter was already a bone marrow and blood donor when she heard a gentleman in Toronto had needed a kidney. After passing all the required testing, she underwent surgery and the anonymous recipient is now able to live.

Giving so much of your life to others is exhausting, and Tess credits her husband as her biggest advocate. “My husband has been my supporter, encourager and strength behind all that I do,” she said. “He’s a blessing! My backbone.”

The reason for all of Porter’s efforts comes back to inspiration.

“If I can be a catalyst for someone else to step up and help out, my job has been done.”