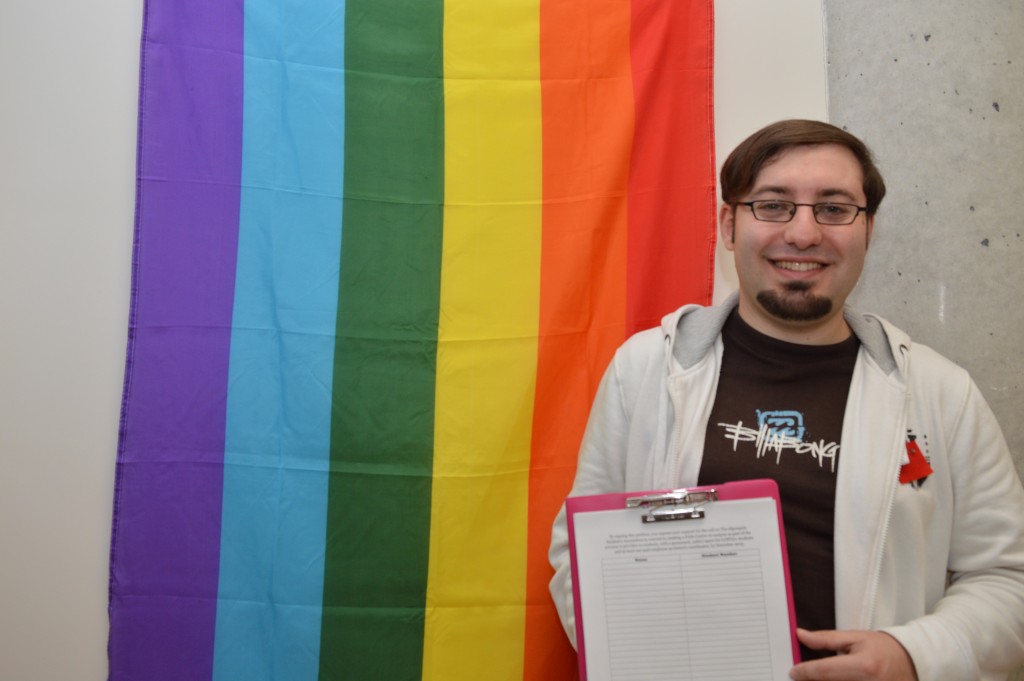 Algonquin’s Queer Student Alliance aims to push for the creation of a pride center on campus, and to rebrand the QSA as a student service, not a club.

Jesse Young, a second-year child and youth worker student, along with Dmitri Melnik, a first-year social service worker student, are part of the team spearheading the operation.
Algonquin is one of the only post-secondary institutions in Ottawa without a pride center with Carleton University, Univserity of Ottawa, La Cite Collegiale have had facilities for quite some time.
“It was an idea floating around earlier this year,” said Melnik.
The QSA approached the Student Association, to propose the idea.
“They seemed supportive, but not helpful. They didn’t provide concrete deadlines, or promises,” said Melnik.
“Former students have been saying that they have been trying for something like this for 10 to 15 years,” Young added.
The Pride Center would be used for many different things. “Holding events, workshops, a space to gather and hangout without fear of prejudice. It’s much easier to do when the space is always available,” said Melnik. “Would also be more welcoming than a classroom. Better than renting rooms.”
The QSA currently has an extremely small office, which can only be accessed by keyholders. The office is also not allowed to be altered in any way, such as removing desks to create more room. There are no set office hours, and those who wish to visit must schedule an appointment.
“Having a person on staff to keep the room open would be great,” said Young.
Melnik and Young are also students, and balance their lives outside of campus.
“We’re not a service. None of us are trained experts,” said Young. “We’d like to have a co-ordinator to be trained to refer those to helpful services.”
Having a dedicated person to run the room would ease the load on the QSA, and in turn, make what they have to offer the LGBTQ community of Algonquin more readily available.
There are other benefits with the club changing into a student service. “It guarantees LGBTQ students a place for help and resources,” Melnik said.
On Dec. 10, 2013, the QSA office was broken into and vandalized. Melnik and Young believe that the center would help prevent issues such as this. With only a glass door which is not allowed to be covered in any way. Melnik addressed the issue of safety.
“It’s not exactly difficult to break in here,” he said.
“Having a room in a more high-traffic area would help security,” added Young.
They currently have 100 signatures and are striving for as many as they can get. However, a petition is not legally binding, and it will still be the decision of the SA. The QSA also plans a launch for this campaign in the coming weeks.