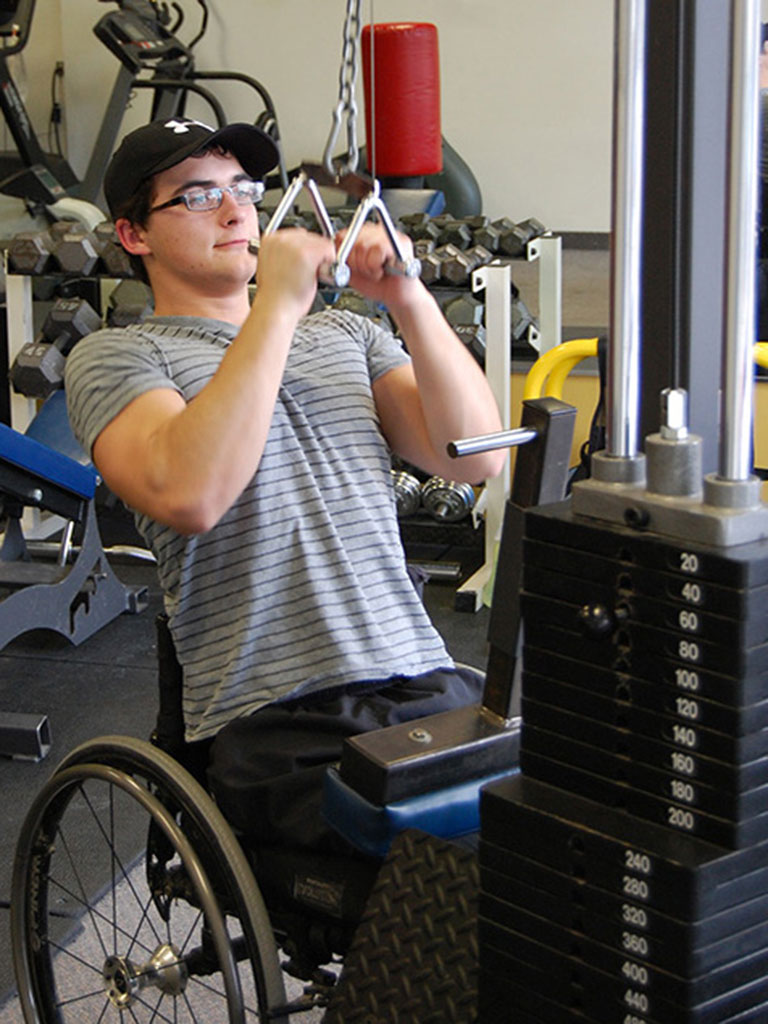 When he opened his eyes, Tyrone Henry found himself in the back seat of his family’s heavily damaged Chevy Blazer. Unable to walk out of the vehicle, he knew the car accident had changed his life forever. He had lost the use of his legs—but not his ambition.

Henry was diagnosed with a T12-L1 spinal cord injury after an accident on Sept. 28, 2010, leaving him permanently paralyzed from the waist down. Henry’s day-to-day life had drastically altered, but a positive outlook presented new opportunities and experiences.

“From the accident, more doors have opened for me than closed,” said Henry, a first-year architectural technology student. “I’m more of a positive person now than I was before, just because I try to go after the positive situations instead of trying to feel sorry for myself.”

According to Henry, one of two things can happen when someone is faced with paralysis: they can retreat behind their disability or they can accept the hand that they have been dealt, rise to the occasion and overcome the obstacle.

For the 19-year-old Stittsville native, the choice was simple.

“My turn-around from the accident, the moment when I said I’m going to push myself and use my situation to get where I want to go, was instantaneous,” said Henry. “Even in the hospital, from the very beginning, I knew I was going to be an active guy for the rest of my life.”

In early December, Henry was honoured with a Celebration of People Award in Ottawa for advocating and helping improve the lives of those with disabilities. His involvement in various local sports, as well as sharing his experiences with students and schools in the area, earned Henry the notoriety of the Citizen Advocacy of Ottawa.

“It’s not uncommon for people to become as optimistic and positive as Tyrone is, but what is uncommon is that he’s come to that place very quickly,” said Brian Tardif, executive director of the Citizen Advocacy of Ottawa. “He’s demonstrated an acceptance and wisdom beyond his years.”

Since sustaining the spinal cord injury over two years ago, Henry has viewed the paralysis as an opportunity that has opened doors and introduced him to new and exciting endeavors. He is currently involved in sledge hockey, wheelchair racing, endurance racing, waterskiing and alpine skiing, with many new para-sports on the horizon.

“Tyrone is an illustration of the resilience of the human spirit and that’s extremely important for anybody that has a disability,” said Tardif. “It’s focusing on what can I do, what can I offer, what are my gifts, as opposed what can’t I do.”

Before the accident, the 19-year-old was an avid athlete, playing hockey, soccer and any other recreational sport that he came across. But whereas one person might view the injury as a negative constriction, Henry gained strength and optimism through a rigorous rehabilitation process.

His post-paralysis journey began by taking up cycling only two months after being released from the hospital. From there, there was no stopping Henry, who didn’t hesitate to try his hand at waterskiing and sledge hockey just months after the accident.

“One of my mentors came over and brought his bike along with him and he told me to take it down the road and see how it feels,” said Henry. “It was the first real exercise I had in a long time, and I was loving it. It was an amazing experience and from there it just caught on.”

Henry has since taken part in multiple paraplegic marathons and races which earned him an invitation to join the Rick Hansen 25th Anniversary Relay, a cross-Canada journey that engages 7,000 participants who have made a positive influence on others. Henry has now been involved in the relay three times and was responsible for cycling some of the most demanding routes in the country.

“Rick is definitely someone I look up to and being able to be in contact with a national hero and icon is unbelievable,” said Henry. “I never would’ve dreamt about doing that before, but then I met Rick and that changed everything, it was so surreal.”

While that may not be remarkable in itself, Henry has his sights set on preparing to make the national sledge hockey team. Henry currently plays sledge hockey with his best friend and current member of the national men’s sledge team, Marc Dorion.

“Making the national team has always been my goal, since a few hours after the accident,” explained Henry. “Marc has been helping me out with practicing and what he’s done motivates me to go harder and faster every time I’m on the ice.”

Henry also entered the weight room over a year ago to supplement his on-ice training. Since leaving basic physiotherapy after the accident, Henry has trained with some of the top instructors in the area, as well as a group of top para-athletes in the capital region.

“Tyrone has a really good outlook on life as a disabled person, and where he wants to go and what he wants to do,” said Peter Morel, Henry’s personal trainer and president of Top Shape Fitness Studio. “It’s very important to have that final goal. He loves hockey and he’s at the physicality level now where, if he’s good at something, take it and see how far he can go with it.”

Henry’s pursuit of his goals and constant quest for an active lifestyle have made him an inspiration, motivation and role model for many who meet him. Being able to channel his energy towards sports gives him the release he needs.

“Tyrone, ultimately, can be an inspiration to people regardless of their abilities,” said Tardif. “He’s young and he’s got a great future ahead of him.”