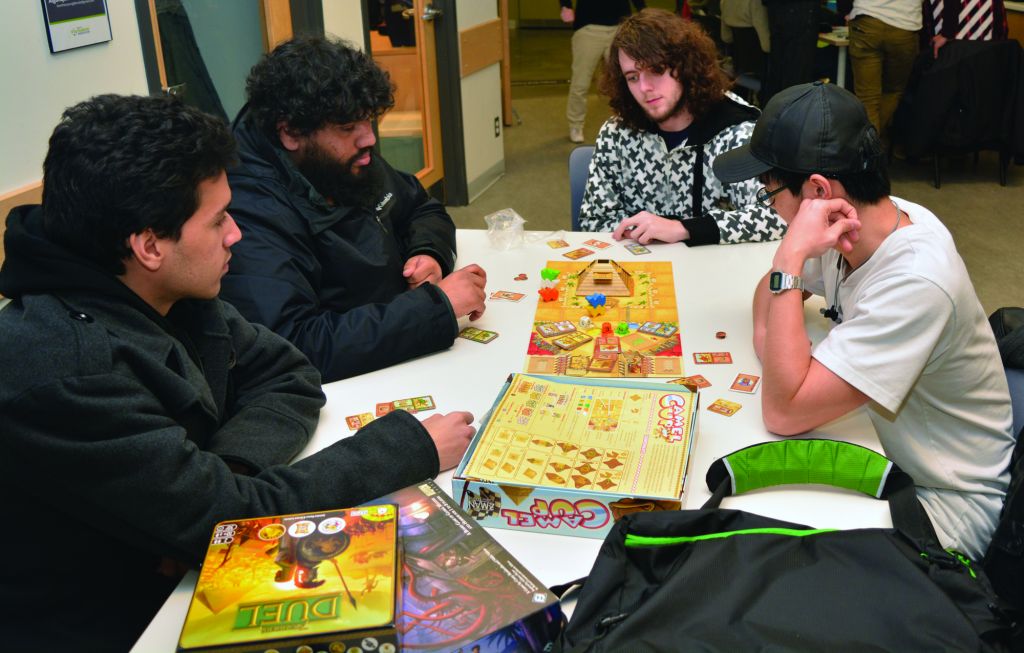 When entering room E209 on Tuesday nights, you’ll see Algonquin’s Board Game Club at one table fighting an ancient evil in Eldritch Horror while others are trying to deduce who among them is the mischievous secret Hitler.

Barely into its first year of running, the club has managed to fill its condensed area with board game enthusiasts every week to roll some dice and draw some cards.

Founded by William Finn in September 2016, the club has acquired more than 20 board games available to students. Adel Jouini, the club’s current organizer of two months, is always keeping tabs on what games to add to the list.

“I am surveying the members of the club to know what board games they like best and what kind of games to add to the club’s library,” said Adel.

Some of the board games the club provides to its members include many cult favourites like King of Tokyo, Ticket to Ride, Lords of Waterdeep and the classic Settlers of Catan. There is also a selection of newer titles including Coup, Sentinels of the Multiverse and Codenames.

In order to add games to the club’s library, Adel must run the game ideas by Patrick Newell, Algonquin’s clubs and communities coordinator. If Newell approves of purchasing games, then Adel may use funds from the $500 budget the club receives every semester.

In the past, the Board Game Club has run free events in order to spread their name across the campus.

This included Board ‘n’ Beers, a gathering of students at the Observatory to enjoy some drinks while playing board games. Adel hopes to run more events in the future.

Adel took over the club after his brother Shamsuddin Jouini, stepped down after two weeks of organizing due to his status of part-time student.

Both Adel and Shamsuddin were more than thrilled to take the title of the Board Game Club because they came from a very board game oriented family. Shamsuddin has been a tabletop gaming enthusiast ever since he was eight-years-old while Adel became a more recent fan last year.

“Whenever we have family gatherings everyone would reminisce over dinner and then afterwards we’d play board games until we’d go to bed,” said Shamsuddin.

Adel feels that the club is still going strong and that the club does a good job of keeping itself running smoothly with the help of all the regulars and friends’ cooperation and dedication.

“I oversee everything but the club pretty much runs itself,” said Adel. “I put the games out on the table and people simply come by and play whatever they want.”

The Board Game Club meets at 6:30 p.m. every Tuesday night in room E209. Adel and the rest of the club welcomes any board game enthusiasts, whether they’re from Algonquin or not, to join in on the fun.