Once upon an Algonquin Knight 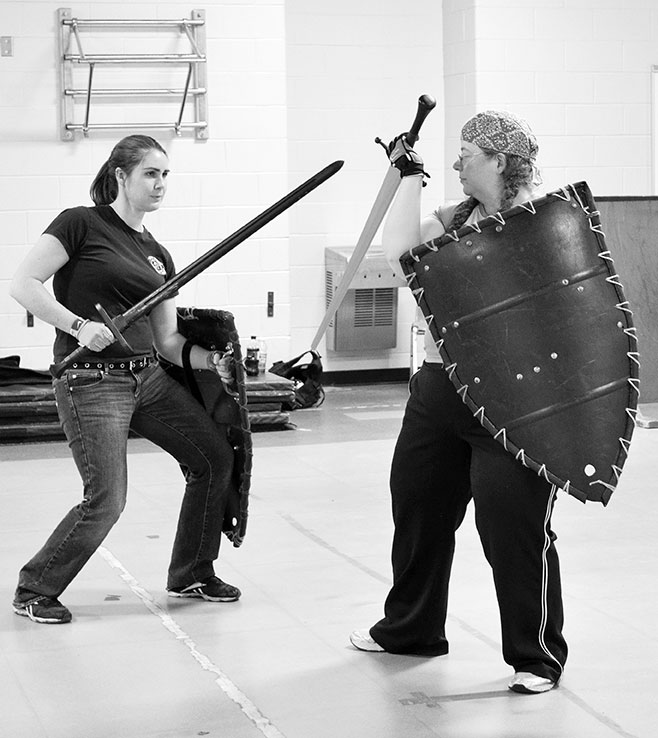 Bill Fedun’s students affectionately call him the resident dwarf.  He has a big beard and the stocky build of one.  At the Osgoode Medieval Festival this past summer, he wore a costume with a jaunty cap and carried an elaborate staff which he used to guide the knights onto the battlefield.

If someone wonders why he has such a beard, Fedun’s co-instructor Jeff Greenwood, known Sensei Jeff to his classmates, will grin and say, “Because he used to be military.”

Bill Fedun is the instructor of a sword-fighting class offered at Algonquin.  Wednesday night is usually reserved for the advanced class.

Should an armed assailant barge into the classroom and threaten the students, they’d know how to disarm him…and not just with a sword.  They’re taught to defend themselves with and without a weapon.

Fedun will tell you that in medieval times, the marshal was the one who would round up the mounted knights, gather them together and see they that they are prepared for battle.

Marshal Bill brings together his own knights under the banner of the Armoured Company of the Sword.  Either during a medieval faire or classes that take place on Wednesdays or Saturdays, he prepares them for the day when their own squires—usually students from the basic course Fedun teaches through Algonquin College—help them put on their armour to face other armoured knights in heavy combat.

On Wednesday, Dec. 4, Fedun thanked one of his students after receiving an energy drink.  “I’m gonna need it,” he said.  He’s not feeling well that evening and Greenwood will be doing most of the teaching for this class.  But if Fedun’s there, it’s always a good night.

The students file in and start stretching.  Then Fedun asks them to line up.  This is the advanced class, with students who have known Bill for only a few months or as far back as 12 years.

Fedun starts the lesson with a small piece of history, explaining to the students a little bit more about the fighting style they use.  When he starts talking, everyone stops and listens.

The style of fighting Fedun teaches is based on the style of a fourteenth-century German fencing master called Johannes Liechtenauer.  Although there are no proper texts written by Liechtenauer, he is referenced in the writings of several other fencing masters such as Sigmund Schining ein Ringeck, Peter von Danzig zum Ingolstadt and Jud Lew.

The European fighting style credited to Liechtenauer consists of six basic forms or moves.  Watching Fedun’s students during practice, it’s clear they’ve memorized them during their time in the class.

You’d expect the sounds of striking swords and aggressive charges would fill the air but that’s not the case.  The students are firmly instructed to attack with purpose but in a smooth, slow way to avoid injuries during the practice session.

An important lesson is taught from the beginning:  learn self-control.

Another lesson has been made into a poem: “One, two, three, four, five, five, six, then throw in the dirty tricks.”

Liechtenauer believed that during fencing, you fight a person, not the weapon they hold.  Greenwood confirms this.

“If you focus on the person’s weapon, that’s all you see,” he said.

Fedun learned European fighting when he started participating in the heavy combat mock battles organized by the Society for Creative Anachronism.  They’re designated “heavy” to distinguish them as a different fighting style.  Rapier fencing, archery and other branches of mock combat are organized by the SCA.

An advantage Fedun had for participating in the mock battles came from his skills as an armoursmith.  He can build a complete suit of heavy armour in his own blacksmith shop and the armour itself is essential for going up against the SCA.

“It’s the only way to beat those guys,” he said.

Fedun’s career as an armoursmith started quite early.  Born in Moosejaw, Sask. in 1956, he was always interested in armour, starting as a hobby of making chainmail.  Over the years, he started making full suits of plate armour without any formal training.

While in the military, Fedun was an aircraft repairman.  The technology used for that job lacked a definite straight-forwardness and required continuous training in order to be up to date with the technology required for those repairs.  It made Fedun realize that this life wasn’t for him.

After 19 years in the military, Fedun retired and started his own company, the South Tower Armouring Guild.  It wasn’t long before he decided he wanted to teach sword fighting as well.  His wife Brenda supported it completely and helps with the administrative side of his course.  The couple has known each other for over 40 years, ever since high school.  Brenda knows teaching is where Fedun is at his best.

“He gets a real emotional high out of teaching,” she said.  “We have a very good friend and she says, ‘The night he’s teaching, I can tell he’s teaching.  He looks younger, there’s a spring in his step.’ It’s just what he does, he just loves it.”

Although Fedun’s students all use practice swords, when he teaches them how to disarm someone, he makes certain they know how to do it in various situations.

“Fencing is one of those things where you use a weapon to defend yourself but I don’t feel you need a weapon,” he explained.  “You have six minutes to learn how to get away from this guy.  It’s not so much self-defence as standing your ground.”

Dominique Roy has been taking the class for almost a year and during that time, she’s learned exactly that.

“When we learn disarm techniques, we learn them with and without swords.  We also learn where to hit and why,” she said.

Now an advanced student, she’s proud of what she’s learned under Fedun’s guidance.

“[The class has] done wonders for my self-confidence.”

Roy’s sparring partner, Stephanie Matthews, joined the Armoured Company of the Sword this past summer.  The class appealed to her due to the fact that she’s a history student at heart and Fedun has plenty to say about history of medieval times.

Watching the students, it’s very clear that this is more than just going through the paces, it’s a workout in itself.

“I learned a lot personally about self-control of my own body,” Matthews said.

As the two women go back to practicing, it’s clear they’re comfortable with each other and it’s apparent in all the students that trust has been established between them.  Fedun wouldn’t have it any other way.

Jason Russett is dual-wielding, a one-handed practice sword in one hand and a dagger in the other.  He’s been taking the class for almost six years and at his first session, it didn’t take 15 minutes before Fedun started talking to him.

“It changed my life,” Russett said about Fedun’s guidance.  “I came into this course in a bad period of my life.  I needed something to focus on, to control my anger.”

The level of self-control needed to make certain your opponent feels safe is inspiring.  The occasional accident does happen but the students watch out for each other, offering to share safety glasses or dig out an extra pair of gloves for their classmates.

It’s no wonder Fedun considers them his knights.  Apparently, chivalry is not dead.

Near the end of the class, all the students form a circle, placing Sensei Jeff at its center.  The students are assigned a number and Sensei Jeff asks Marshal Bill to call them out at random.  When their number is called, each student must attack the person at the center and allow them to defend and counterattack.

Some of the students have never done this exercise before but it’s clear they enjoy it.  Quiet instructions are given to the person in the center by teachers and students alike.

Sensei Jeff joined the Armoured Company of the Sword over 10 years ago.  He’s also the Company’s kenjutsu instructor, teaching Japanese swordsmanship alongside the European fighting style.

Marshal Bill isn’t just teaching his students how to fight.  He’s also teaching them how to teach what they learn.

Sensei Jeff took the lead for this class, letting Marshal Bill observe and occasionally assist in the lessons.

On another day, when he’s feeling better, Marshall Bill will stand as main instructor but it’s clear that the knowledge he passes on won’t be lost or set aside.

The advanced students and their fighting skills are Marshal Bill’s knights and his legacy to the community.  Brenda knows this, too.

“When we had our Great Pumpkin Massacre a couple of weeks ago and a whole group of 70 people turned out to the dinner afterwards, laughing, joking and carrying on…for the most part, we’re like-minded people and that’s an incredible legacy.”

Fedun, the Marshal of the Armoured Company of the Sword, isn’t just their resident dwarf: a bearded armoursmith who can fight.  He’s a knight at heart as well, charming and irresistible when, instead of a handshake, he kisses the back of a woman’s hand when they part ways.