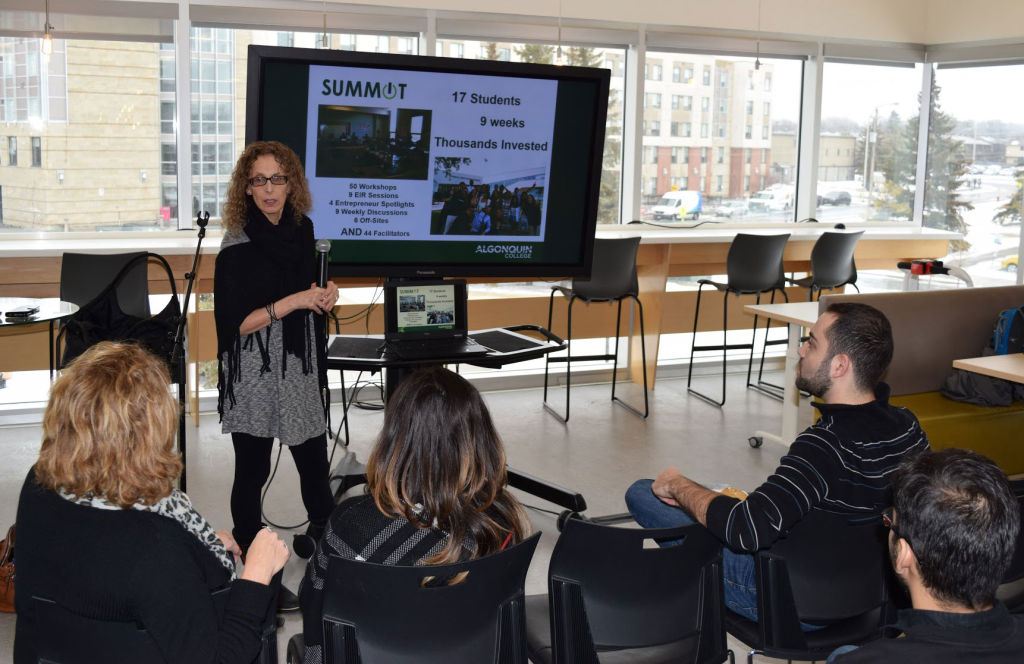 Leanna Vertucci speaks to a group of young entrepreneurs who gathered at the AC Hub on Feb. 3 fro a presentation about Summit. The program is held on campus during the summer

Summit is workshop for entrepreneurs

The idea of starting your own business might seem overwhelming or impossible, but your view of that could change this summer.

Summit is an 11 week-long program for students or young entrepreneurs who are looking to start their own business, or have an idea for one. The program is available to anyone in the city of Ottawa between the ages of 18 and 29, and takes place on campus at the construction research centre from May to July.

The program is held through the summer on Tuesdays, Wednesdays and Thursdays from 9 a.m. to 4 p.m.

There are upwards of 60 workshops, ranging from how to pitch your business idea, doing your business model canvas, sales and marketing and vision and value for your business. The workshops are directed by entrepreneurs who are working in the field.

“We had 17 students, with 15 different businesses, and all of them graduated,” she said. “We’ve had at least between 75 – 80 per cent increase the number of contacts; they kept their business going and some of them have shelved it just because they’ve come back to school. But what they learned in that program they said is even helping them with school.”

“It was by far a really enjoyable experience and I can say this coming from prior experience,” said Ethan Camarena, one of the students who attended Summit in its first year. “I’ve been through a lot of similar programs which help entrepreneurs start businesses and I can say by far, this was the best program I’ve been through, and kind of the best summer I’ve had.”

They are accepting online applications through the Students’ Association website until Feb. 23 at midnight.

“What they’re looking for in participants is an idea and obviously something a little bit tangible, something going for a business,” Camarena explained. “But what’s most important is the quality of the person themselves and the characteristics they have. If they’re ambitious, if they’re passionate about their idea, they’re problem solvers, anything relevant to just being driven by your idea and actually doing everything you can to really get it going, that’s what they’re looking for.

“If you care about your idea, just apply.”