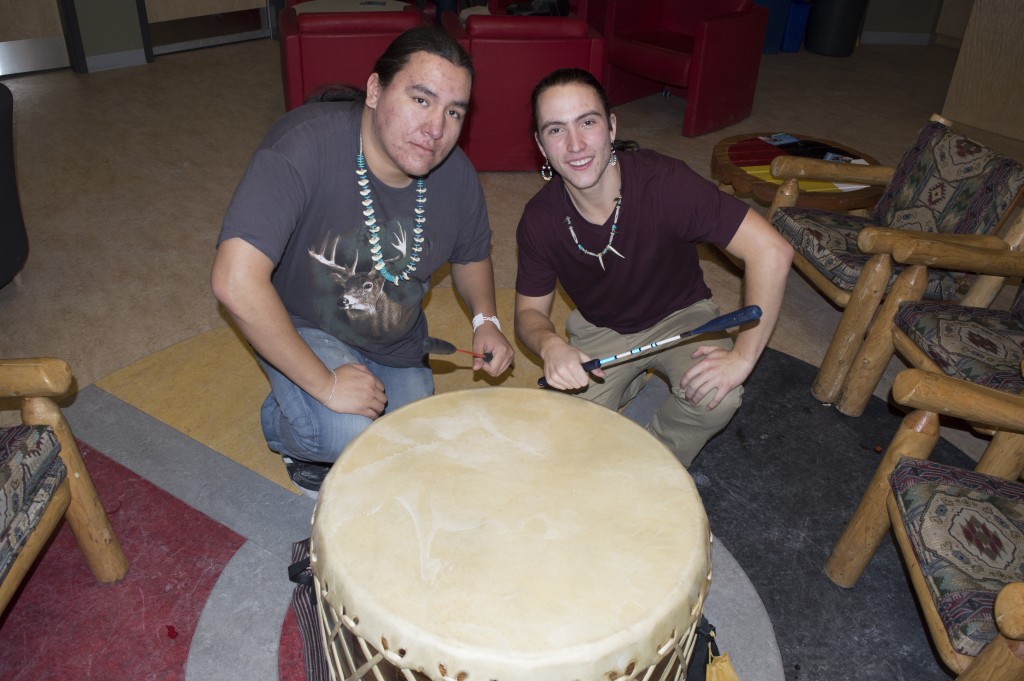 From left, David Charette and Michael Wade, known together as Southern Thunder, will be this year's host drum. The duo have been drumming and singing together since September 2014.

Aboriginal students at Algonquin College have raised just over $6,000 since last September to fund a powwow that will be free for all ages, genders, and ethnic backgrounds at the school cafeteria on Jan. 29.

Elena Abel, the Mamidosewin Centre activity coordinator, has been helping students fundraise for the powwow. Abel, who does a large portion of the cooking for the fundraisers, says she wants all students, Aboriginal or not, to attend the event.

“A lot of students think they’re not allowed to come and don’t out of respect,” said Abel. “But everyone is allowed and encouraged to join us on the 29th.”

With weekly events and monthly fundraisers, the Mamidosewin Aboriginal Student Centre, located at room E122 in the Student Commons building, has put a great effort into setting up a school powwow.

Tony Mendes, the Aboriginal student support specialist, recommends that any student available on Jan. 29 attend the powwow, which will have food, dancing, and singing. Mendes said the powwow specifically caters to Aboriginal students but he encourages everyone to attend. “It will be fun,” he said. “Come learn more about traditional culture.”

Natasha Commanda, one of two head dancers attending the powwow, also encourages anyone who likes dancing to attend.

“The pow wow is a really beautiful celebration of traditional culture,” she said.

As one of the head dancers, Commanda’s role is to advise the other dancers and direct the flow of the powwow. Commanda has been dancing her whole life.

“Come celebrate with us,” said Commanda. “It’s free for everyone. Come dance.”

Kane Odjick, one of the flag bearers attending the powwow, is one of many students who’ve helped fundraise for the event. As flag bearer, Odjick’s job is to help the singers, dancers, drummers, and elders get ready before the event and then escort them to the powwow.

David Charette and Michael Wade, known together as drum group Southern Thunder, are going to be the main drummers, known as the host drum, for the event. Both Charette and Wade are Algonquin students. Charette, 23, is an Aboriginal studies student who has been drumming and singing for over 10 years. Wade, 19, is a graduate who studies social sciences and has been drumming at a professional level for just over a year.

Charette said he started learning how to drum and sing because it’s a way to keep the culture alive. Wade agrees, adding that it’s also a way of healing.

“Mamidosewin is a good hang out spot,” said Charette. “Everyone is welcome. We’re all family here.”

Charette and Wade encourage any student who is curious about traditional culture to attend.

“It’s a good experience not everyone gets to have,” said Wade. “It’s really like a second home and a second family.”