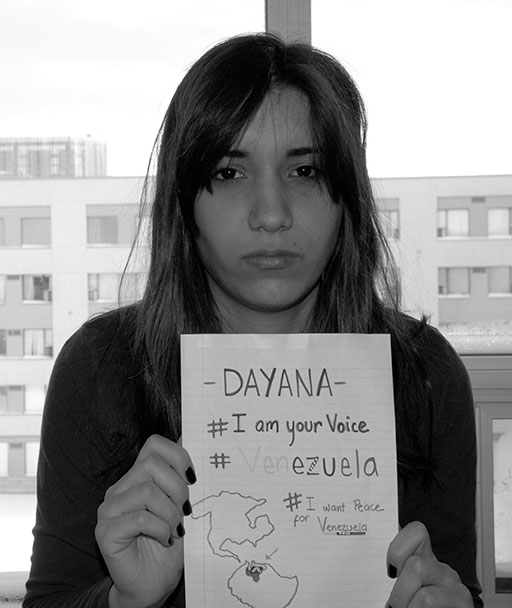 Under President Nicolás Maduro, the people of Venezuela have endured government corruption, violation of rights and liberties, and disturbed a 21-year-old Venezuelan student in Ottawa by the loss of her home.

In late 2013 Dayana Masi, resident of Caracas, ground zero to the increasingly violent protests and capital of Venezuela, chose Algonquin’s hotel and restaurant management program to further her education after dropping out of her psychology major at Central University of Venezuela in Caracas.

“There’s always been [government] corruption and shortage of amenities,” said Masi. “It’s gotten worse since Maduro was elected in 2013.”

Subsequent to the massive general strikes in Venezuela in late 2002, Masi said these are the largest protests the country has seen since. She, along with her friends and family, claim the protests are in retaliation to rampant crime, inflation and a loss of basic living supplies like toilet paper, coffee, and meat.

Back home, Masi has a mother and a sister in Caracas, as her father passed away 11 years ago. Masi’s mother wishes her not to return home, but instead stay in Canada for the duration of her program to keep away from the violence.

Masi plans on returning for two weeks in April, at the very least.

According to the BBC a recorded 22 deaths, have occurred as a result of violent protests that have engulfed parts of the country, the majority of these being students.

“Nowadays in Venezuela you’re always stressed. The police are supposed to protect and give us stability, but they do the opposite, they kill and arrest without any reason,” Masi said. “If you go out at night you could get kidnapped by anyone.”

She recalls a night in Caracas when the car she was in with family was halted by the body of another car. They were threatened at gun-point to leave the car or be killed.

On another level, a more personal one, Masi feels guilt over the situation.

She wants it to be known she did not run from Venezuela, and despite the hardships she has endured, a passionate and earnest love of her home still exists. Substantial protesting began in early February; Masi was already situated in Algonquin residence by that time, studying her program.

“People in Venezuela say ‘this country sucks,’ they want to leave, ‘it’s not worth the fight anymore,’” Masi said. “On the contrary, I wish to be with my people in the streets protesting Maduro and his corruption – nothing is more important than defending the place you were born.”

Maduro has blocked all national television and what you see is what the government wishes you to see, Masi explains. Venezuelans pass information on through social media sites like Facebook, their newsfeeds are “blown up” with political gossip and allegations against Maduro.

Hundreds of people are indoctrinated by the government, paid to go into the streets, and to protest on the side of the Maduro administration, said Masi on government corruption.

In the hundreds of arrests that have taken place over the last month, one of said arrests was a friend to Masi, whose name she refused to disclose. He was in his home after participating in a protest when the police came into his apartment complex and “took him away.”

“‘Whoever protests against the government without permission will be imprisoned,’” Masi quotes Maduro during one of his broadcasts to the country.

“Venezuela used to be a modern leader in South America,” said Masi. “Now it’s the least stable, most dangerous. It’s so sad.”

With precocious perspective, Masi speaks of civil unrest on this scale as a moment in time. She knows that one day peace in Venezuela will return in one form or another, left or right, government doesn’t matter to her.

Masi desires that one day she may take the knowledge and experiences learned at Algonquin back with her to Venezuela to help improve her country. She feels this is her role in the Venezuelan crisis.