Student misconduct on the rise 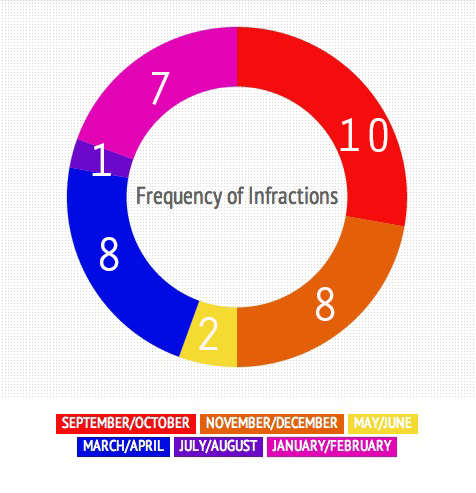 The number of Student Conduct Reviews is on the rise at Algonquin.

In the past year, from Sept. 3, 2012 to Sept. 3, 2013 the Woodroffe campus conducted over 30 misconduct hearings, according to data obtained by the Times through a Freedom of Information request. The data released did not divulge the names of students, but showed the nature of the offences, the dates on which the infraction was committed, as well as the outcome of the hearing.

The documents shared shows that 30 cases were brought in front of the Student Conduct Board, however any cases that have become outstanding criminal matters could not be released, the college said. It is likely the total number is somewhere between 34 and 38, as the Times previously reported.

When asked to confirm the actual number, however, the Times was unable to receive a consistent response.

According to Earl Green, coordinator of security investigations, three students withdrew before the charges got to the conduct process, and confirmed that one case—former SA president Eli El-Chantiry—is still before the courts.

When asked to speak to the historical context of the number of reviews, comparative to previous years, Green confirmed that this past school year saw a spike. The explanation Green gave to the influx of Student Conduct Reviews, was that there has been a change in the reporting, investigative and response process over the last couple of years.

Generally speaking, conduct reviews are intended to determine whether a student has violated the conduct policy and to impose sanctions if a violation has been committed.

He said, the number of complaints security services are receiving is climbing due to more competent security hiring allowing more eyes on the ground. Not only is the volume of issues increasing, but so are the complexity of many cases.

The biggest issues facing the campus are harassment and marijuana use. Last year security services launched a successful blitz investigation targeting students leaving the parking lots without paying. The Times has learned that in some of these cases, transcripts were withheld until an amount of $545 was reimbursed to parking services.

Not all offences warrant being brought to the attention of the Student Conduct Board, however when multiple offences or patterns of behavior occur, that is when the college intervenes. Every year about 100 behavioral warning letters are issued and usually only a handful of those people end up under review.

The most commonly occurring offence this past year was section 2.3.5: Any act which endangers the mental or physical health, safety, or the rights of a student or staff of the College, or of clients served by the students during their field work, clinical experience or co-operative work term.

In essence, acting in a way that can harm another person.

Endangerment can also be to themselves. Many of these incidents were coupled with offences of other sections, including harassment, disorderly conduct and the overconsumption of controlled substances.

The sanctions or punishments allotted vary widely: From educational essays and community service, to being banned from entry or expulsion. The punishment sentenced in 20 of the 30 cases examined, was a behavioral contract. These contracts lay out what behaviours the student is prohibited from demonstrating, as well as stipulations surrounding counselling. If a student was to break the agreement, they would face being brought in front of the SCB again and a suspension would be pending.

The second most frequent sanction was a suspension. In many cases these last at least a year. A security encumbrance is placed on the offender’s file. Therefore, upon attempts to return to Algonquin, their standing is contingent on the boards approval.

Within the data released, the most number of incidents recorded for one person was a case dated Nov. 2, 2012. The student had a total of nine infractions.  The student was suspended until Fall 2013, expelled from residence and prohibited from entry.

According to Green, this student had appeared before the SCB twice. This individual was someone security services dealt with in the month prior to her Student Conduct Review, quite regularly. She had a dependency on alcohol and was exhibiting suicidal ideations under the influence. When intoxicated, she would demonstrate unwarranted physical contact with other people and endangered herself and others by laying in front of vehicles.

The day of her student conduct hearing, she was arrested at 5 a.m. and was unable to appear. This student has not yet returned to the college.

The board is a three member committee having the mandate to determine whether a student has violated the Student Conduct Directive and to impose sanction(s) when a violation(s) has been committed. The current board is composed of Chair Dave Donaldson, Director of Student Success Services, Shelley Styles, Coordinator of Security Investigations, Earl Green and a student representative from the SA, vice-president Krisha Stanton.

The process follows guidelines of natural justice, much like criminal court. There are four main steps in the review process:

Step one: Report—any member of the college can lay a complaint but quite often the complaints come through security services directly.

Step two: Investigate— occurs before the hearing and are much like criminal investigations. They include interviewing witnesses, complainants, the student in question, video review around the college, background checks, contacting police, photographic evidence as well as weighing any substances involved.

Step three: Notification— the student in question is then notified of their summons to the Student Conduct Review, and are given detailed information into their offences, the evidence they have and are recommended to speak to the ombudsman.

Step four: Hearing—during which the alleged can bring witnesses and are able to seek legal council, however during the hearing they must speak for themselves. After hearing all of the information, the board hands down their sanctions.

In cases where a student may be subject to civil or criminal proceedings, either resulting from an incident on or off campus, the college will still pursue a disciplinary hearing. In events where security services learn a student is conducting criminal behavior, police will be notified.

For instance, according to Green in a recent case on Nov. 21, 2013, a student was caught with 14 grams of marijuana. This is a summary conviction offence under the controlled drugs and substances act and therefore this instance has become a police mater. It will still be brought to the attention of the SCB.

The college is currently looking to make an office of Student Conduct in the coming years given the complexity and number of issues that are being dealt with. Green says it’s a consideration down the road to support the student body at large as well as the review process.

For more stats on student misconduct at Algonquin, click here.