No sleeping at this meet 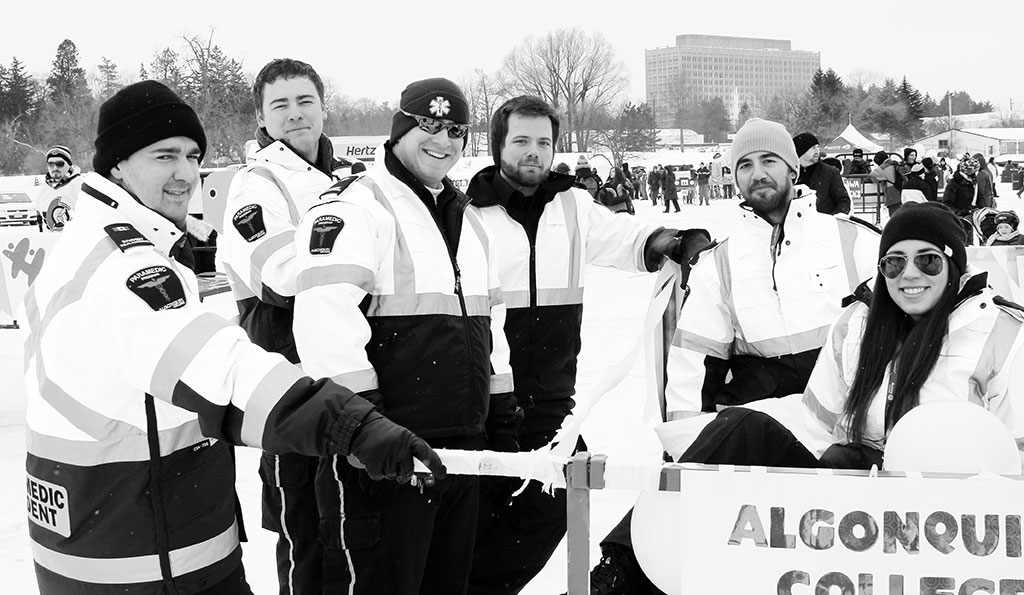 Algonquin College had 2 teams compete in the Kiwanis club’s annual Bed Race on Dow’s Lake on Saturday, Feb. 1 to kick off Winterlude.

A team of paramedic students and a team of welding students participated in the race and despite the cold and snowy conditions and lots of falls, there were cheers and laughter from both groups.

“It was quite fun,” said Tyler Burgess, a first-year paramedic student at the college. “I enjoyed it quite a bit.”

The race was separated into 3 heats with 5 races in each heat. The second race of the first heat had both Algonquin teams racing against each other and though there was a great effort on behalf of the paramedic team, the welders won.

Unfortunately the welders were short a racer due to a lack of attendance by students in the program but despite the competitive spirit, the paramedics lent some of their racers to the welders so they could compete.

When asked why he decided to switch teams, Geoffrey Smith, also a first-year paramedic student replied. “We may be on different teams but we’re all Algonquin, go Thunder!”

That comradery spilled over into other races as the welders lost another racer due to a light injury so they sent over an extra racer for the final heat.

Despite the group effort from both neither of the teams won that day. It wasn’t really about winning though. It was about the charity, especially on the part of the welders.

The Welding Program builds the beds for the races and donates them to the race. Each bed nets the Kiwanis club $200 and the welding class provided 6 beds to this year’s event.

As for the paramedics, this is a yearly event for the first-year students to go through, though normally, they are accompanied by the Police Foundations and Culinary programs as well as the welders. Last year, the temperature dipped below -15 Celsius so there wasn’t much blame on those who didn’t come this year.

The final race of Algonquin’s day came with 3 welders and 2 paramedics on the same team. With cheers of “Let’s go Thunder!”