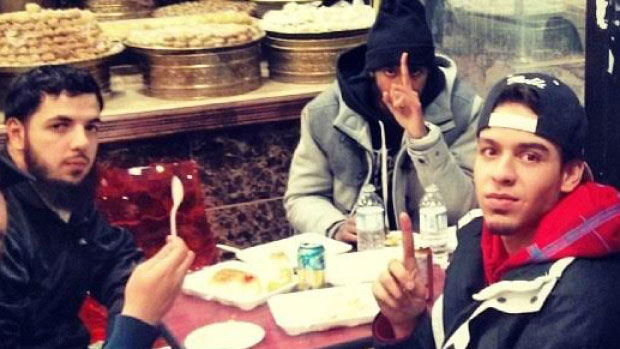 (Instagram Photo) From left, former students Awso Peshdary, alleged terrorism suspect, Khadar Khalib, believed to have joined ISIS to fight in Syria and Ayyub Arab, former MSA secretary at a restaurant in 2014. They are raising one finger, in the photo, a hand gesture that is often used in ISIS propaganda films.

The club formerly known as the Algonquin College Muslim Students’ Association, has found itself in the media spotlight again, after an Ottawa restaurant shooting on Jan. 31 that left a former student critically injured and his cousin dead.
Ayyub Arab, 22, a former student at the college in 2013 and a former executive of the ACMSA according to its official website, was shot once in the hand and twice in the chest at the Cobden Road Somali eatery Shifa Restaurant.
His current condition is unknown. However, both the Civic hospital and Queensway-Carleton hospital have confirmed he is not currently a patient there.
The shooting also left his cousin, Marwan Arab, 20, dead, following a gunshot to the head.
No family members have responded to interview requests from the Times.
Ayyub Arab was on a court-appointed list of people alleged terrorist recruiter and Algonquin two-time graduate, Awso Peshdary, was ordered to not be in contact with while in custody.
There have been no arrests and Arab is not under suspicion or facing charges for any crime in relation to the shooting. He did, however, already have a court appearance scheduled for the beginning of February, on a charge of theft under $5,000.
While it is unclear which program Ayyub studied, his name does show up in the Algonquin Live search directory and on the MSA website.
Officials at the college would not confirm he was a student.
“We cannot discuss whether someone is or was a student due to privacy concerns,” Phil Gaudreau, the communications officer at the college, wrote in an e-mail to the Times on Feb. 4, 2016.
However, the SA’s clubs and communities coordinator, Patrick Newell, said that all club members must be activity fee-paying students. This means that Ayyub Arab was an Algonquin full-time student up until at least November 2013, when his image was uploaded to the MSA website.
The last update and modified time for the executives page was Jan. 7, 2014, and it features Ayyub’s photo and the title of secretary in the executive board section.
The website was created in 2013 – two years before the arrest of the club’s former treasurer and before the club changed its name to the Muslim Students of Algonquin.
“It wasn’t just the Muslim Students’ Association,” Newell said. “There was a number of different students’ associations… I instilled that change this year, to take student associations out of club names. What it comes down to is we are the Students’ Association that represents all students on campus. We provide a service to all students. Clubs do not provide that service, so we changed that as a whole.”
He says it is still the same club though. “There are members in it that were a part of the Muslim Students’ Association, for sure,” Newell said.
Although they do not have a new updated website and the MSA Facebook page has been rarely used since February 2015, Newell says the MSA club is still active at the college.
“They’ve had socials and different things like that,” said Newell. “It is up to the club if they want to advertise their events.”
No one from the club responded to requests for interviews.
Peshdary, 26, was the former treasurer of the Algonquin MSA and a 2014 graduate of the social services worker program. He is also a 2012 graduate of General Arts and Sciences – Health specialization, according to the convocation books of those years.
Both Peshdary and Ayyub were photographed together in a restaurant in 2014 with another former MSA member who is also suspected of terrorism-related activities. Each man holds one finger in the air in the photo.
“A single raised index finger has become a sign of (the ISIS) cause, and it is increasingly common in photographs of militants,” said in a Sept. 3 2014 article in Foreign Affairs.
The experts in the article refer to it as “the jihadi equivalent of a gang sign.” It is a hand gesture that signifies the tawhid, the oneness of God, and it has been taken over by the Islamic State in their propaganda, according to a June 15, 2015 article in the International Business Times. Within the jihadi context it also “takes on a political meaning, rejecting any form of government not under Shariah law.”

Peshdary, who is now in custody facing four terrorism-related charges, is alleged to have been a terrorist recruiter and financier according to the RCMP, while he was a student at Algonquin and treasurer of the MSA club.
Peshdary was charged in February 2015 with four counts of participating in or contributing to an activity of a terrorist group; facilitating a terrorist activity; and conspiring to participate or contribute to a terrorist activity with two others. The charges were stayed and Peshdary’s new trial date has been scheduled for December 2016.
Of the 15 names on the non-communication order obtained by the Times, six have links to Algonquin College and the MSA club.
Court-appointed non-communication orders are reserved for witnesses, victims, and persons of interest identified in an investigation.
Among those named are Khadar Khalib (former Algonquin student and MSA member who took part in Hijab Awareness Week 2013), Abdalrahman Naddaf (former president of the MSA according to the ACMSA official website), Samr Farhat (former Thunder basketball player featured in the OCAA roster), Mohammad Ali Farhat (former business student and 2014 grad according to the convocation book of that year), Mohammed Tulul (former MSA coordinator), and Ayyub Arab (former secretary of the MSA).
Samr Farhat played on the Thunder basketball team during the winter semester of 2012 with the jersey number 28, confirmed Cheryl MacEwan, the administrative assistant of Athletic Operations in a Feb. 19 e-mail, speaking on behalf of the coaches. She said that Samr “played very little.”
According to the OCAA website, he played 10 games between January and March 2012.
“We do not have any photos of him, nor does the coaching staff,” MacEwan wrote.
According to RCMP court documents obtained by the Times, the charges against Peshdary cover the time period between Nov. 22, 2012 and Feb. 2, 2015, which coincides with his studies and field placement through the social services worker program at Algonquin.
In fact, according to a Feb. 26, 2016 Ottawa Citizen article, Peshdary is believed to have met John Maguire — a University of Ottawa student who has joined ISIS and shared videos calling for terrorist activities in Canada, in the summer of 2012.
Peshdary had studied at the college previously , graduating from a certificate program in General Arts and Science with a specialization in health. It is unclear how long he was treasurer at the MSA.

It’s also not known how he was able to graduate from the social services worker program because students must participate in three semesters of field placement, as the program’s website states.
“Students must provide the college with a current Police Records Check for Service with the Vulnerable Sector prior to the deadline,” it reads, which means Peshdary would have had to pass such a check.
Vicky Green, a program coordinator for the social services worker program said that students do this check twice – once prior to the level two placement and then another just before going into the third level final placement.
“They get their police records check by mid-November for first year and get placed for January,” Green said. “Then they need to get another one done by June to be placed for September for two terms.”
If there is something that shows up on the police record check, she explained, they are told it has not been cleared and a meeting is set up between the student and the chair of the department.
The search includes national and local police databases with cooperating police services.
“The possible existence of criminal convictions and outstanding charges, as well as incidents of all police contacts for the previous five years will be considered for release,” says the official Ottawa Police form for this type of criminal records check.
According to RCMP files and the February 2016 Ottawa Citizen article, Peshdary did have past police contact at the time of his Algonquin application: he had been brought in for questioning and was named as a key recruiter in a terrorist network in 2010, and was also arrested for domestic assault in 2011. His charges were dropped but these contacts with police should have shown up in any background checks based on the information on the Ottawa Police website.
So far, no one has explained how that could have happened.
Peshdary’s co-accused in the conspiracy charge is Khalib, a former Algonquin student and member of the MSA who RCMP believe flew to Syria to join ISIS in 2014 under Peshdary’s counselling, without graduating.
According to the Feb. 26, 2016 Ottawa Citizen article, the RCMP allege that Peshdary played a hand in recruiting and coercing both Maguire and Khalib’s travel while connecting through the Algonquin club. One method of doing so, RCMP allege, is through paintball excursions at a Stittsville facility where a CSIS informant befriended them and got them talking about their extremist beliefs and plans.
Khalib’s photo was featured on the MSA’s Facebook page About section in a Flickr link, up until February 2016. The link has since been removed but the Flickr account is still accessible.
In the photos, he is featured smiling with students in the Student Commons during Islam Awareness Week, manning booths that teach students how to wear a hijab.
They are dated November 2013 – just months before his plane ticket to Syria to join the Islamic State.
Peshdary has been in custody since he was charged in February 2015. His trial is set to resume in December 2016.