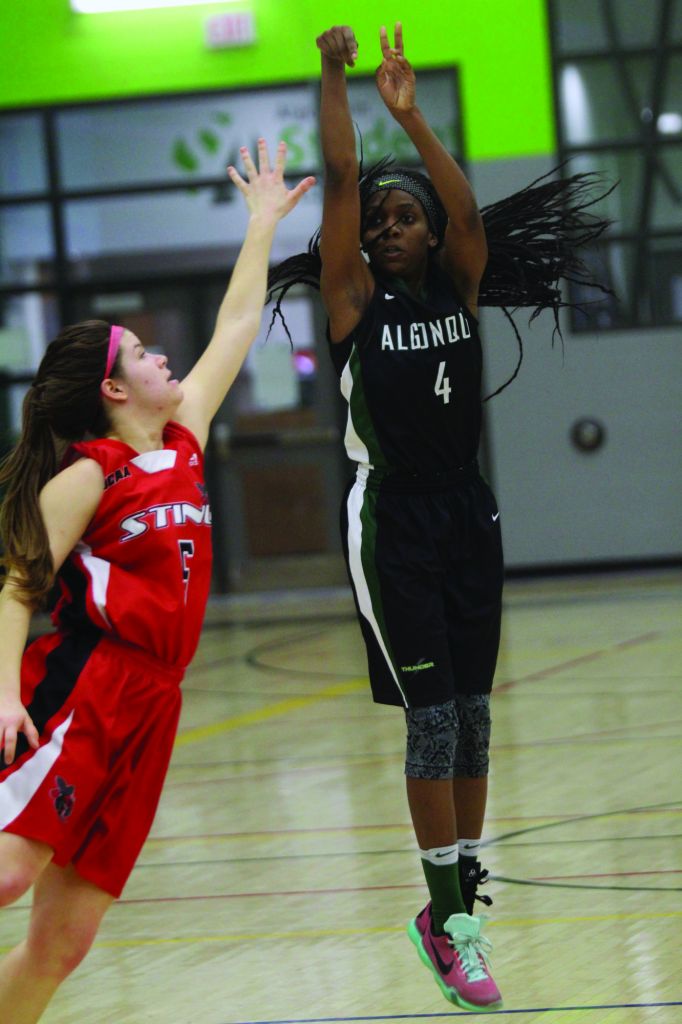 The women’s varsity basketball team ended its regular season with an 80-72 loss to the division-leading Seneca Sting on Feb. 18.

Both teams had already qualified for the playoffs coming into the game, however it was still very important for Algonquin to defeat the number one ranked team in the division.

Both teams had previously faced each other back on Nov. 4 where Algonquin came out victorious on the road 55-43 in a tough defensive duel. But this time it was a different game.

The Thunder started things off very slowly; scoring only 12 points in the first quarter and were seemingly unable to put the ball in the basket for a large portion of the period.

The offensive energy and output finally elevated in the second. However it was Algonquin’s defensive play that became suspect as it allowed the Sting to put up 28 points in the quarter.

The second half was a different story than the first, but the damage had already been done. Unable to come back from a 15-point half time deficit, the Thunder found itself playing catch-up the rest of the game.

“This is very disappointing,” Algonquin guard Amoney Abakar said about the loss. “This game was really just to prove something. It didn’t mean much in the standings but it was still a very important game for us.

Entering this one, the Sting had already clinched the first spot in the east division standings. But a win against a team like Algonquin was equally important for a Seneca squad that has very little experience playing together in crucial games.

“This was a big game for us,” said Seneca head coach Craig Walker. “We haven’t done anything yet. We have a very young roster. We have nine freshmen on our team. They need to learn how to win games like these.”

The Thunder had five of its players reach double-digits in scoring, with Abakar leading the way with 18 points. Algonquin guard Jeylinh Bui also delivered a strong performance, ending up with 13 points and team-highs: nine rebounds and six assists.

In spite of the slow start, Algonquin’s lack of presence on the offensive boards didn’t help their sake either.

The battle of the boards was even on the defensive end, however the Thunder finished with only 44 rebounds compared to Seneca’s 53 and got whooped 16-4 on second chance points.

“We talk a lot about the rebounding stat and the turnover stat and how important they are for us and tonight was the evidence of that,” Bond said. “They out-rebounded us and we made way to many turnovers. We were pretty gassed from yesterday’s game, but we still need to stick to our game plan and avoid making silly mistakes.”

The loss brings Algonquin to a 12-5 record to finish the season, which slots them in second place in the east division standing right behind Seneca.

The Thunder’s post-season begins on Feb. 25 with the crucial crossover game at home against the 10-8 Redeemer Royals, who sit in sixth place in the west division.

Both teams have yet to play each other this season, however that doesn’t change Algonquin’s mindset going into the game.

“We prepare the exact same way whether we play against the first place team or the last place team,” said Bond. “It doesn’t change, no matter who we’re playing against.”