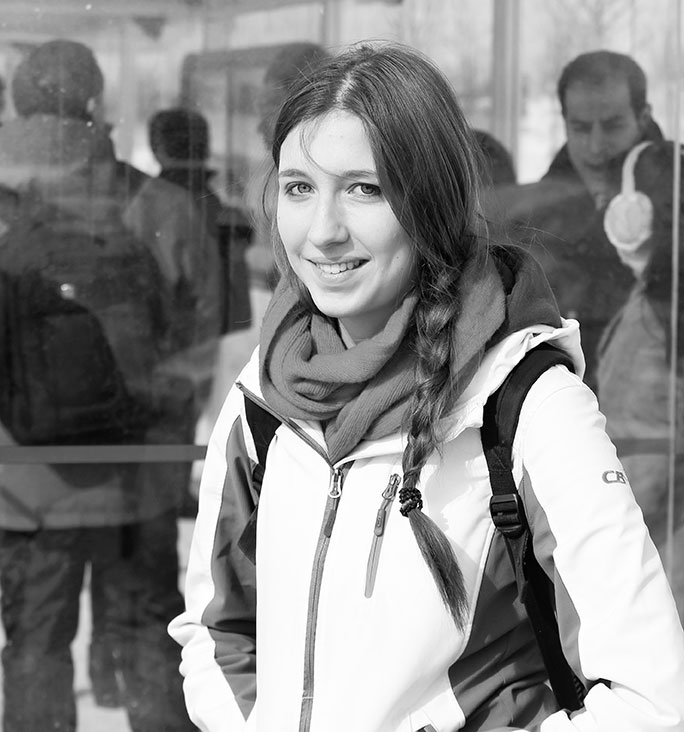 Melissa Van Shyndel, a pre-health sciences student, waits for the bus at Baseline Station. If Algonquin students vote for a U-Pass it will be implemented close to the same time as the completion of renovations at this transit station.

A portion of the information the Students’ Association has presented to students regarding the U-Pass has been incorrect, evidence obtained by the Times shows.

Among it is an email sent on Jan. 16 to Algonquin’s class representatives, in which the SA wrote that there is no opt-out for the U-Pass program and that all 18,500 students at the college would have to pay for the pass whether they live in OC Transpo boundaries or not. The claim was repeated at public transportation information sessions, during a forum with class representatives and by attaching the statement to an online survey.

However, in a Feb. 13 interview with the Times, Ottawa Transit Commission chair councillor Diane Deans clarified that this was not the case.

“Students living outside of the city of Ottawa, as well as at many of the rural villages and communities inside city borders, may opt-out of the U-Pass program and receive a refund,” Deans said. “If you live in the city of Ottawa but in an area not served by public transit you have the ability to opt out.”

There is no voluntary opt-out program however, and students need to meet a certain criteria. Those who live in areas with OC Transpo routes or students that meet other criteria, such as those registered with the Canadian National Institute for the Blind or with Para Transpo, will not have to pay any U-Pass fees according to Deans.

The SA has accused city officials, most notably Mayor Jim Watson and Deans, of stonewalling negotiations with them on the U-Pass issue. Private letters obtained by the Times between SA president Sherline Pieris and Deans say otherwise showing that the SA, not the city, have stalled the discussion.

While the city remains unwilling to remove the age cap on student passes, according to Deans they have encouraged constructive dialogue with the SA on the U-Pass issue for several years, acknowledging the college’s unique set of student demographics when compared to the city’s universities.

“We fully understand there are students who drive…That is why we need to understand the demographics of Algonquin,” said John Manconi, the general manager for transit services in Ottawa. “We will bring in an incubated team of our planners, business people, legal too, and we’ll have people to help answer all those issues.”

Pieris, in a message to Deans dated July 23, 2013, gave the city an ultimatum. Pieris promised to Deans that a U-Pass dialogue at the college would happen on the condition that the city first reinstate student pricing for passes. She also added if any referendum were to ever occur, it would follow the completion of Baseline Station, with construction predicted to finish in 2015.

“Mayor Watson and I have both offered to meet with them (the SA), and they have not taken us up on the offer,” said Manconi. “What is very important is that the Students’ Association wrote (to us) and said we are not interested in the U-Pass.”

The SA made the decision to express to the city that it was not interested in the U-Pass for its members on June 6, 2013.

“I cannot understand why a referendum was not held as soon as it was suggested by Jim Watson,” a confidential source close to the current SA executive said. “A referendum is something that is valuable because it means you are actively listening…and gaining insight from the eyes of your student body.”

The SA has left some college officials out of the discussion as well.

Roch Lafond, manager of the college’s parking services, has never been consulted on the U-Pass subject.

“It should be up to the students,” Lafond said. “It would certainly help a bit with the parking situation.”

In an email sent to the class representatives on Feb 21, 2014, Pieris apologized for the SA’s decision to condense demographics that they had originally received from the registrar’s office.

These demographics were referenced during the transportation information sessions held by the SA. They sorted the student population into two groups based on their addresses.

The demographic information supplied by the registrar’s office stated that 51 per cent of students would not benefit from the U-Pass because they live within five kms of the college, attend full-time programs during the weekend when parking is free or live in areas without OC Transpo routes.

The SA stated that this group would have to pay for the U-Pass regardless of their situation. Students that live in Quebec, though they can use the U-Pass on the STO were included in this percentage.

The remaining 49 per cent of students were said to live more than five kms away from the college and in areas with access to OC Transpo routes.

The original demographics given to the SA by the registrar’s office gave more specific percentages. For example, less than one per cent of the student population attends full-time programs on weekends.

“The SA…condensed the information to share with the membership…” Pieris wrote to the class reps. “Upon review, we now see how our presentation could be misinterpreted.

For this, the SA is sorry.”

Within hours of the email being sent two class representatives were expressing their disappointment with the SA’s actions.

Business intelligence system infrastructure class representative Stephen Conrad, while appreciative of the apologetic tone of the email, was concerned that the information was seen as being “misinterpreted.”

“It’s a topic that should be put to rest and be done with it,” he said. “The amount of time we’ve been spending on it is ridiculous.”

Chantal Howard, who relies on public transit every day, was not only surprised but angry as well.

For Howard, it’s difficult to take the bus knowing other post-secondary students are paying half the price for the exact same service.

“I can clearly say students at Algonquin College have been lied to,” she said after receiving the apology from Pieris.