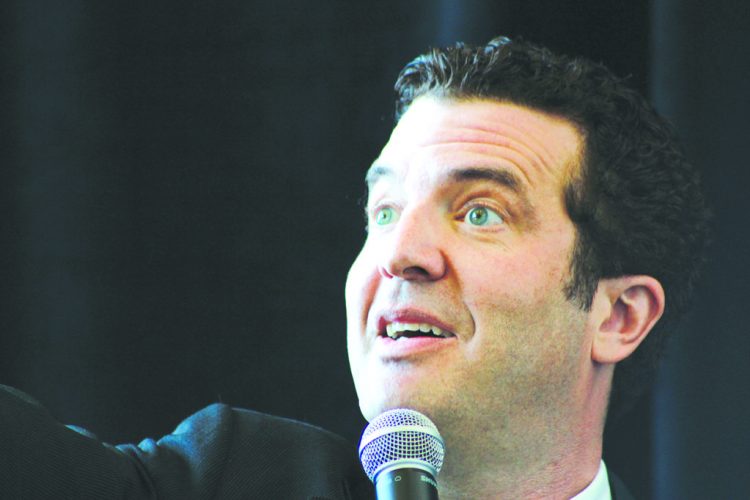 Rick Mercer visits the Woodroffe campus on March 24 to give a speech and shoot promos for his TV show, The Rick Mercer Report, in the Student Commons. He is dedicated to the Spread the Net cause for which he helped raise $170,000 this year. Algonquin raised $10,000, the most of any Canadian school.

Known for cracking jokes about politicians and ranting in the streets of Toronto, Rick Mercer showed a more serious side of his façade when he sat down for an interview with the Times on March 24.

“I’m not much different than most Canadians,” said Mercer. “I think there are a lot of different charities I support, like most Canadians, but Spread the Net is one I’m most proactive about.”

A native of St. John’s, Nfld. Mercer started out in theatre and comedy shows. He was on and helped create This Hour Has 22 Minutes, a spoof current events show on CBC. He later created his own comedy show, The Rick Mercer Report, which has been on the air for 11 years.

Mercer visited the Woodroffe campus on March 24 due to Algonquin raising the most money for Spread the Net. This is the second year in a row that the college has collected more money than the other participating post-secondary schools in Canada.

In total, Algonquin raised $10,000 out of the $170,000 raised by Canadian schools to buy anti-malaria bed nets for people in Africa. Mercer pointed out that the college’s grand total raised over the years is $50,000, thus sparking a thunderous applause from the student body.

Mercer holds the student challenge every year, prompting students from elementary schools, to colleges and universities to hold fundraisers and raise money for those less fortunate overseas.

He travelled to Africa years ago with Belinda Stronach, a former Conservative Member of Parliament, who was acquainted with Jeffrey Sachs, an American economist, who was doing work in Africa. Mercer and Stronach went to observe Sachs’ doings and followed him around from location to location.

Mercer said they would go to one community and it would be totally devastated. Children would be absent because they were deceased, which destroys the spirit of the community. People were not well, there was no food growing and there was no school.

Sachs explained that the big difference was the access to bed nets.

That trip inspired Mercer and he co-founded Spread the Net with Stronach in 2007.

“We were faced with not an insurmountable problem, but a problem that we realized a lot of Canadians could get involved in – providing a solution. Luckily we come from a country where most people can wrap their heads around 10 bucks to save a life.”

The Spread the Net rally was held in the Student Commons. Mercer continued his tradition of making a rock video for his show’s season finale, where students from the three winning schools dance and sing along to the song he has chosen. The video appears as a montage of scenes from each school.

This year’s song was Kids Wanna Rock by Bryan Adams.

“Algonquin was a big part of that last year because you guys can rock like nobody else, as it turns out,” Mercer told the audience. “When the music starts I want all of you to go completely mad. Arms in the air and go completely bonkers.”

The crowd of students and faculty cut loose. People were up on chairs dancing or banging thunder sticks together while belting out the chorus of the song. Bed nets were thrown out into to the mob and people draped them over their heads. Five students were chosen to go up on stage and play the air guitar while their peers cheered and fist-pumped.

For an hour the Commons building was filled with screaming, singing, and Mercer calling out instructions on what to shout at his cameras. He asked the crowd to shout, “Spread the Net”, “Algonquin Spread the Net”, and “Kids Wanna Rock”.

Asked about how he feels about coming back to Algonquin, Mercer said that the college seems like a really fun place to attend and has a great sense of community spirit.

“There is no school in the country with more spirit than Algonquin College,” Mercer told the audience. “You’re number one!”

Monday’s rally will appear on The Rick Mercer Report on April 1 at 8 p.m.