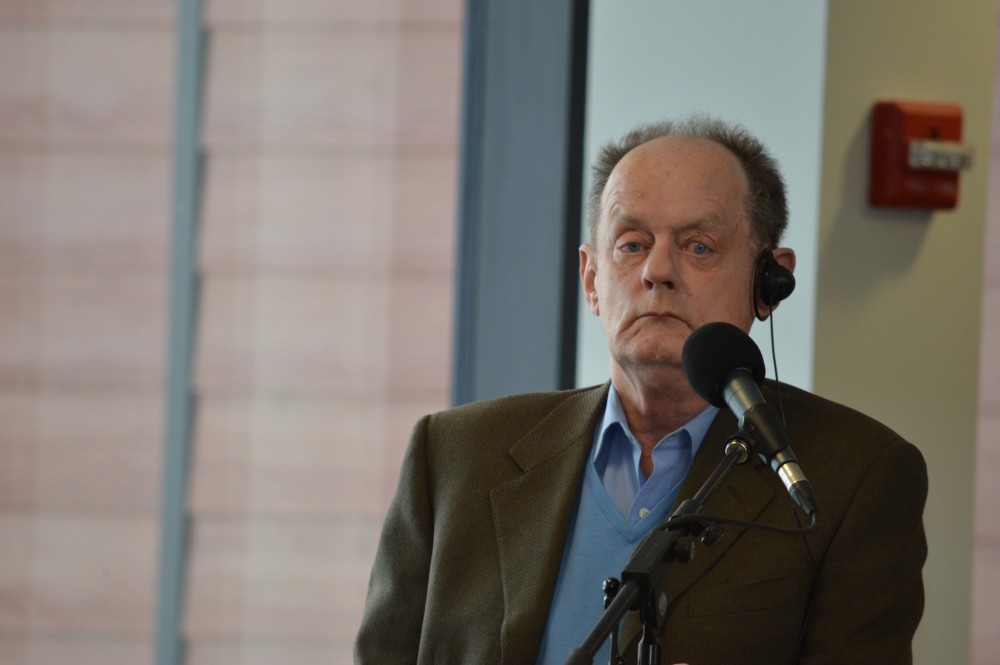 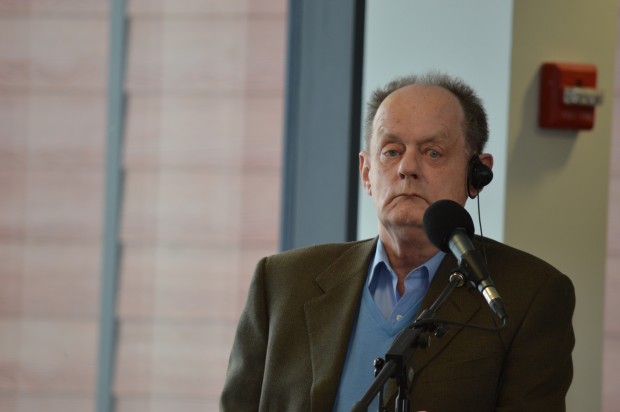 Student debt and the debate of college versus of university were the primary themes throughout Rex Murphy’s conversations with callers, audience members and students as he led a live radio broadcast from Pembroke campus March 1.

While snowmobiles whizzed past the windows of the open-concept Student Commons area, the CBC mainstay brought his popular call-in show, Cross Country Checkup to the Waterfront campus with the question: “Are young people getting the post-secondary education they need?”

“I went to university right out of high school,” said audience member Megan Mabey, 29, “I’m the first woman in my family to go to university. I come from a single-parent household so there were no savings.”

Mabey spent five years at Mount Allison University in Sackville, NB then moved to Ottawa where she attended Algonquin for museum studies. While working throughout her time at both schools she accumulated a great deal of debt.

Many of the speakers shared similar stories. Some amassed large amounts of debt while attending university only to switch gears after graduation to get a college education, where they received practical experience that is more likely to lead to employment.

“I was a good student – I did very well in school – so I was told it would be a waste of my potential to go to trade school which is what I wanted to do,” said Liam Fraser, a forestry technician student at Algonquin and former high school teacher. “When I went to university it was six years of school and I graduated with roughly two years’ salary of debt; if I’d worked for two years and didn’t take a cent to myself I still couldn’t pay off my debt.”

Fraser said he “saw the writing on the wall” and would have to wait 10 years before he could find full-time employment as a teacher. He decided to go to Algonquin as a means to gaining employment in the forestry sector – one which is growing.

The promise of an education tailored toward employment was cited as a motivating factor for many of the students and graduates who spoke. Some had to find out the hard way by completing university and entering the workforce before enrolling in college.

“I think students expect way too much from a (university) degree,” said Miles Arbour, a student of outdoor adventure at the Pembroke campus and a graduate of Trent University. “It doesn’t mean somebody is going to hire you. A lot of universities say, ‘You’re not just a number here.’ You’re just a number there.”

As someone finding himself $50,000 in debt, Arbour, like Mabey, said he doesn’t regret his time at university, but laments the disconnection between employability and the unrealistic amount of debt one must take on.

“The idealism that’s incorporated in the pitch from universities really doesn’t go with the realities,” said Murphy. “I very much admire the idea that university is some super ideal thing, but it hasn’t become that. It’s becoming a debt factory.”

It was a rare occasion for Murphy to broadcast before a live studio audience. Under the loose concept of the discussion about post-secondary education, he was joined by guest hosts, Algonquin President Cheryl Jensen and Fred Blackstein, Vice Chair of the Board of Governors of the college.