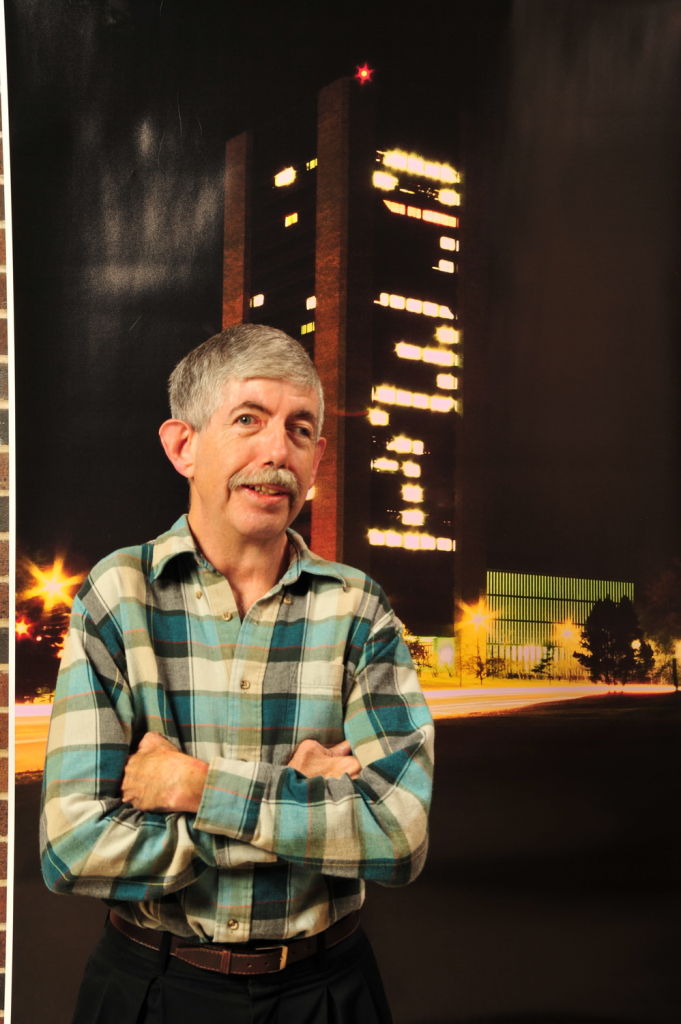 Mark Valcour, a sound engineer who taught at Algonquin College, died on Jan. 7, at the age of 60. He touched the lives of many of his students.

A sound engineer who taught at Algonquin for three decades, Mark Valcour died Jan. 7. The radio broadcasting professor was 60.

Valcour was found at home in bed in Cantley, Que. where he lived alone.

“We hope he died peacefully in his sleep,” said Dan Mellon, professor in the radio broadcasting program at Algonquin. “That’s what we’re holding on to right now.”

Valcour’s passing leaves a hole in the program that will be hard to fill, said Mellon.

Over at Carleton University’s School of Journalism and Communication, staff are in a state of confusion.

“We’re trying to figure out how to do all the things that he did,” said David Tait, assistant professor of journalism at Carleton University and Valcour’s friend for 20 years. Valcour managed their sound studio single-handedly for 28 years.

Second-year Algonquin radio broadcasting student Ben Barns was going to help Valcour teach journalism students at Carleton University this semester. In a conversation with Barns over the Christmas break, Valcour said he couldn’t wait to see his students again in January.

“It kind of messed up the day,” Khatib said.

After finishing the show, Khatib posted a tribute on Twitter, joining many of Valcour’s former students and colleagues under the hashtag #ourradioguy.

“He literally touched thousands of people,” said Mellon, who is also a former student of Valcour’s. “His influence will live on for many years to come.”

“I think his love of music and his love of tinkering came together in sound engineering,” said Tait.

The radio station gave Valcour a real sense of purpose, said Tait. Valcour experimented with radio and sound until he became an expert.

“He was largely self-taught,” said Tait. “He kept pushing to be better and better at what he did.”

Valcour’s hard work paid off. After graduating, he was CKCU FM’s production manager for six years.

Algonquin hired Valcour to teach in the radio broadcasting program in 1984. Thirty years later he was still showing second-years the ins and outs of sound editing.

In addition to teaching at Algonquin, Valcour was an audio technologist at the Carleton University’s School of Journalism and Communication for 28 years. He also ran his own audio production company called Sound Output, and did sound for thousands of concerts in the Ottawa area.

Some nights Valcour would stay up until the wee hours of the morning doing sound for a punk show before rolling out of bed the next morning to teach. Extremely hard-working, Valcour put in long hours, sometimes sleeping in his Carleton University office overnight.

“He lived six lifetimes, really,” said Matthew Crosier, station manager for CKCU FM and Valcour’s former student. “He was like a dynamo, and nothing stopped him.”

Valcour was an excellent audio instructor. He could explain how sound worked to students who didn’t have clue. He taught students to listen closely to other people’s recordings and to listen to their own, said Crosier.

As a teacher, Valcour had very high standards. He pushed students to re-do work until it was the best they could do. He went out of his way for students, sometimes going to their apartments late at night to help them with an assignment, remembers Crosier.

Even though he had high standards, Valcour was easy to work with.

Mellon remembers Valcour as quiet and unassuming. His job was to make other people sound good.

“He never really looked for the spotlight, like so many people in this business do,” said Mellon.

“Live broadcasting is scary enough, even when you’re dealing with pros,” said Tait.

Valcour also had his quirks. He would bring in pictures of his huge Lego collection to share with students. He hated paying for parking, and would sit in his car outside Algonquin’s N-building until the very last minute before class so he could pay as little as possible.

Valcour treated everyone equally, from CBC journalists to bands playing out of their garage.

“It didn’t matter what walk of life you came from, he had time for you,” said Mellon.