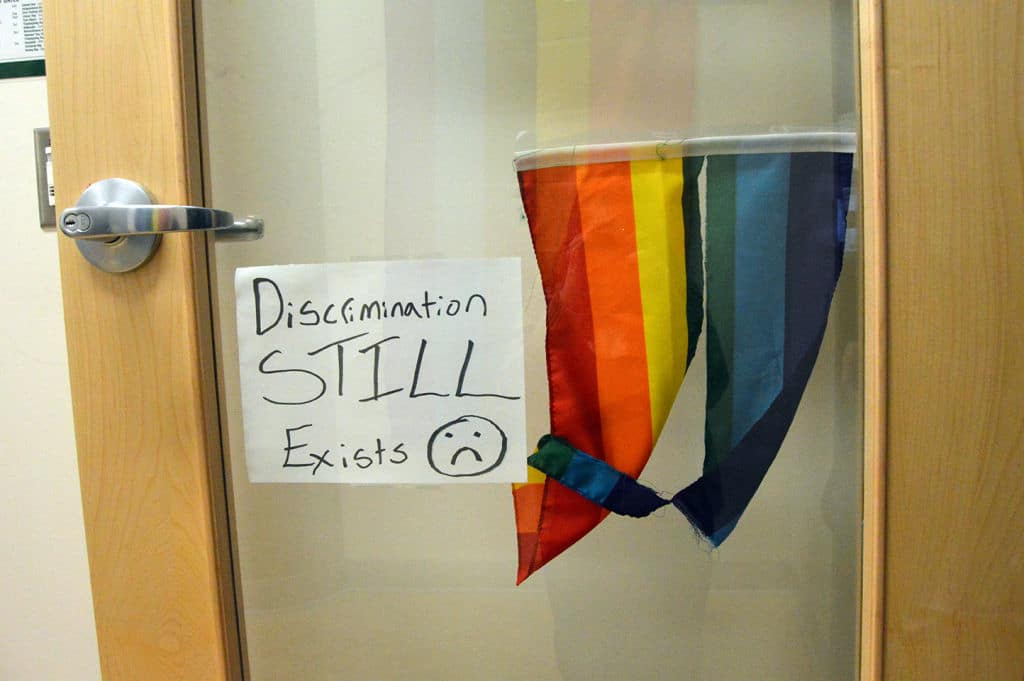 The ripped flag jas been on disp;ay outside of the QSA's office since the incident occured last December to send a message against discrimination

A break-and-enter and vandalism at the QSA (Queer Student Alliance) office on Dec. 10, 2013 has caused disagreement between LGBT committee advocates and Algonquin security as to whether the act should be considered a hate crime or simply mischief.

“Today, it was discovered by some of our members that the QSA office had been broken into. Whoever it was that broke into the office had trashed the place, leaving a mess of our self-help pamphlets, ripping our pride flag, throwing some of our stationary, and destroying a Crisis Line poster. We have taped the ripped flag to our office door with a sign reminding everyone that discrimination still exists.”

Faris Lehn, Coordinator for Community and Clubs at Algonquin said he was approached by the QSA members shortly after damage was discovered and at first they weren’t going to report it.

Lehn was the one who encouraged the club to post the message on their Facebook page to explain what happened.

“I told them to post it and not be scared of it,” said Lehn. “ But we have to treat it like a hate crime.”

“It was a little bit unsettling to know someone went into the room for that reason,” said QSA member Sabrina Sousa. “They didn’t have to go and rip the flag.”

Gary Leger, GLBT Liaison Committee Advisor said he found out about the break-in through Algonquin security on Jan.8 and that it would be further investigated by the Ottawa Police.

A problem with the locking mechanism on the QSA room door was what granted access to the person to vandalize the office in the first place.

“The door would only half close,” said Lehn. “You would have to slam it pretty hard for it to close fully so after the incident I contacted Physical Resources and they put on a heavier lock.”

Leger says this hasn’t been the only hate crime to happen on campus recently.

According Abdalrahman Naddaf, the president of the Muslim Student Association at Algonquin, on Dec. 13, 2013, the Friday before the end of the fall semester, Naddaf and his friends were walking out of the Spiritual Center around 6:30 for last prayer of the day at school when they saw a male walking out of the room with a stack of books in his hands, one of them being the Qur’an. They also noticed that he had erased something off the whiteboard in the room.

“My friend went and followed him to see if he wanted anything,” said Naddaf. “He walked away and then he placed the books into the garbage.”

Naddaf said they walked straight to security and reported the incident.

One of the main concerns of the GLBT Committee was the lack of communication and support between Security and the student body.

Leger extended an invitation to Algonquin’s security to attend the latest GLBT’s Committee where the incident at Algonquin was on the top of their discussions however, security declined the offer.

“To know it [the break-in at the QSA] was motivated by hate we would like to have some evidence to indicate that and in this case we don’t have evidence,” said Colin Bonang, Director of Safety and Security Management. “We’re just cautious we’re not classifying something without evidence to classify it that way and causing a speculation around something.”

Although the GLBT Committee and the Ottawa Police at this point can only act as a an advisory to Algonquin security, Leger hopes that GLBT Committee can help Algonquin open up the dialog around campus.

“ What I would like to see happen as an outsider looking in, is a conversation with the student body saying we’re aware these incidences are going on and we have a zero tolerance for hate, this is what we need to avoid, adds Leger. “We hope Algonquin still stays engaged and still keeps coming to the table.”