Project Lighthouse a beacon for attendees 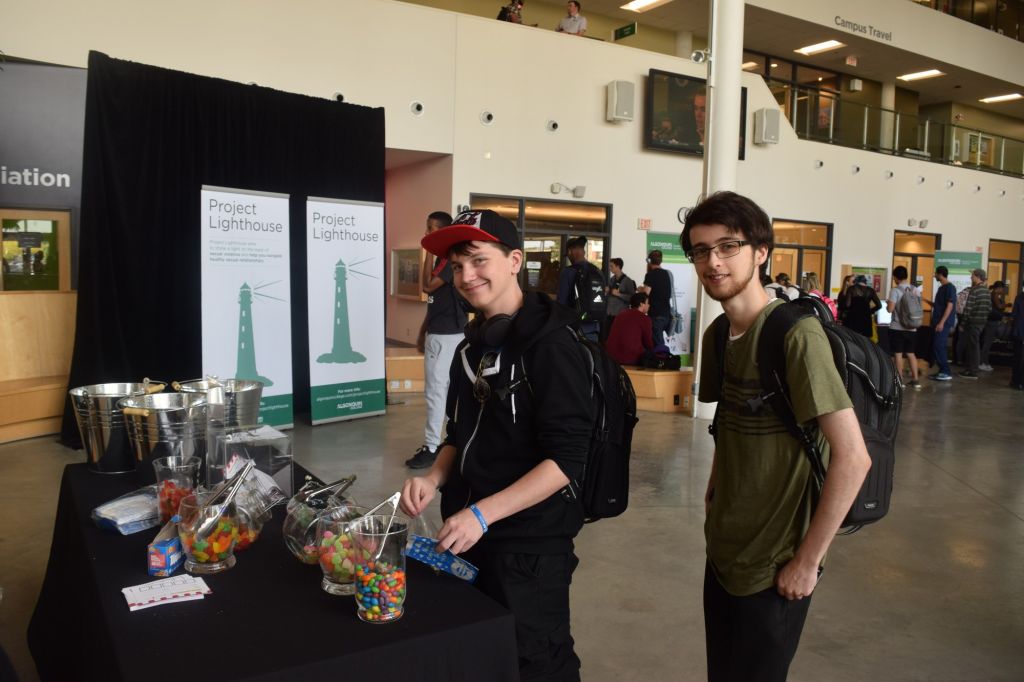 Students were required to receive a stamp from at least five booths, ensuring they left the fair having learned something about the services related to Project Lighthouse, before they could collect free candy. From left, first-year video game development students, Bailey Hodges and Seaon Taylor receive their candy.

First-year paralegal student Sarah Armstrong was among the many students surprised by just how much they didn’t know about sexual assault prevention services at the college.

“Like the rape crisis centre,” she said. “I knew it existed but I didn’t know what they could do. Now I know you can volunteer, so I’m looking at volunteering.”

Armstrong was just one of dozens who packed into Student Commons on Sept. 27 for the first annual Project Lighthouse fair.

The crowd was drawn in by the promise of free candy, if they received a stamp from at least five booths, all of which were giving out information on college resources supporting sexual violence prevention.

While many students only chose to stop in the hopes of getting free food, most left feeling as if they had learned something.

“It helps get students engaged,” said Jessica Guitard, another first-year paralegal student, when asked about the impacts of continually educating students on the resources and services offered at Algonquin.

Some students had no idea that Algonquin had any initiatives like Project Lighthouse.

“I like that there’s support for LGBTQ at Algonquin,” said first year business administration student John Darling, who was impressed with the amount of resources available at the college.

There were booths from health and student services, counselling services, the Umbrella Project, the Algonquin Pride Centre and a table promoting the new mobile campus safety app. There were also two community partners: the Ottawa Rape Crisis Centre and the Coalition to End Violence Against Women.

Jasmine Cady, one of Algonquin’s counsellors, welcomed the opportunity to get the word out about counselling services at the college.

“it’s fabulous, just look at how many people are here,” she said. “It’s a great way to gain awareness about sexual assault on campus and all the services that are available to support students.”

But it wasn’t just passersby beguiled by the promise of processed sugar. There were also students already involved in college services who came out to bolster their own knowledge.

“I work as an RA so seeing all this stuff being provided to the college is really beneficial, the information you get from it is pretty awesome,” said Slavish. “I think this should happen a lot more, I love it.”

Larmour works in the AC Hub. “We’re paired with about 20 students,” he said, “and we’re supposed to know a lot about the resources that the school and the community offers.”

Both students agreed that free candy was a good way to “trick students into learning”, saying the fair was a great success.

Project Lighthouse has already reached over 2,000 students, according to Sarah Crawford who coordinates the initiative, thanks to events that have been happening each week since the start of term.

Bangin’ Brunch in residence, an event Crawford described as “talking openly about sex, consent and relationships,” drew out at least 350 students before classes had even started. Over 1,000 water bottles with information on both Project Lighthouse and the Umbrella Project were given out at the Mother Mother concert, and over 600 t-shirts were tie-dyed on AC Day 1.

“Everything you want to know about sex and drugs”, an event in the Observatory featuring celebrity personality, Spenny, was a success and Crawford hinted that another one of these events is in the works for later this year.