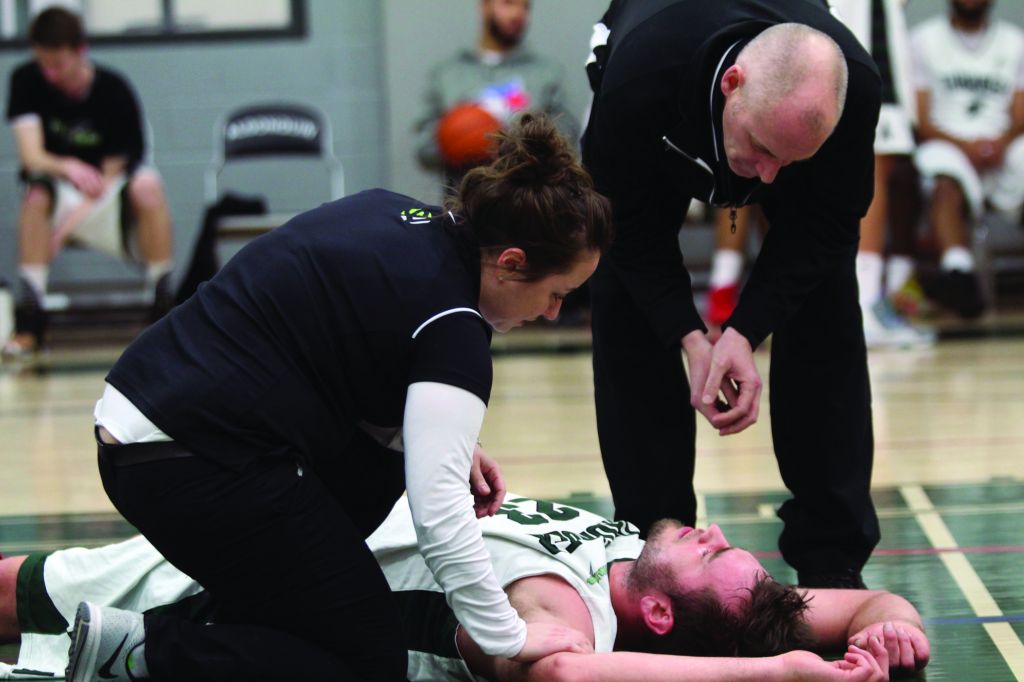 The men’s basketball team has officially qualified for the post-season after a 99-86 victory over the last-place La Cité Coyotes on Feb. 10.

It was a high-scoring and entertaining affair that was capped off by a spectacular fast-break poster slam by Shymar Brewster in the final minute of the game that had fans jumping out of their seats and spilling onto the court, causing the referee to put a brief stop to the action.

The third-year Algonquin guard recalls this dunk as perhaps the finest in his career.

At the end of the night, several people lined up for his autograph. But the brash Thunder superstar wasn’t keen to keeping all the praise to himself.

“Most of the credit on that one goes to number 11 Ameer El-Badry,” said Brewster. “He’s the one who passed me the ball. But when I saw there was just one guy at the rim I knew what I was going to do.”

As great as the moment was for the spectators, the sequence left his teammates equally amazed, yet not exactly shocked.

“That was crazy man,” said Thunder forward, Zerious Loney. “Shymar is a great player. As soon as he went baseline I just knew he was gonna bang on him.”

Loney had himself a night to remember as he dropped a season-high 27 points on a clean 10/16 from the field. Plus he added a game-high nine boards, good enough for player of the game honours.

“I was on fire at the beginning and the guys knew I was hot, so they kept giving me the ball,” said Loney.

The 99-point outburst is the most Algonquin has put up in regulation all season. The offence was a nice treat for the fans, but for the coaching staff the team’s lack of defensive efficiency is worrisome, especially with the team now going into the playoffs.

“The offence was nice to see because that’s a good defensive team over there,” said Thunder head coach Trevor Costello. “But we’re not very impressed with how we played defensively considering they’re one of the worst offensive teams in the league, and we let them score 20 points over their season average. That just can’t happen. You can’t give up 25 points per quarter and still expect to win.”

Coach Costello pointed to a lack of inside presence as a reason for his team’s defensive struggles on the night, as two of his veteran big men, Sam Wilson and Denis Dervisevic, both suffered different injuries over the course of the game.

A sprained ankle for Wilson and a hard blow to the head of Dervisevic, which left him laying on the floor for several minutes, kept both the players out of the action for the remainder of the evening.

“It was a whiplash,” said Thunder athletic trainer Kristen Sarlo, on Dervisevic’s injury. “His head snapped back and it cracked some of the muscles in his neck. It’s a mild head injury.”

The fourth-year veteran is unsure if he’ll be available for the next game, but he said he’d do what he can to get back on the court as soon as possible. However, he knows it’s not a decision that he has full control over.

“That’s my hope [to play next game]. We’ll just have to talk with the trainers and see what happens,” said Dervisevic.

The win marks the Thunder’s fourth consecutive victory, ever since losing three in a row back in January.

Algonquin now has an 11-7 record, putting them safely in the fourth spot in the East Division standings.

With only two games left to play this season, the Thunder gear up to take on the third-place Centennial Colts and the second-place Seneca Sting on Feb. 17 and

This time both games are at the Algonquin Gymnasium, where the Thunder has a convincing 6-2 record. However, none of their wins have come against top-ranked teams, so they know it’s going to be a test and likely a crucial one.

“It’s very important that we win these games,” said Brewster. “It’s going to decide whether or not we get a home or away game in the playoffs and that’s huge. We want to be at home. Instead of driving five hours to play someone we get to stay here, which is much better for us. Plus our home crowd is really going to help us.”