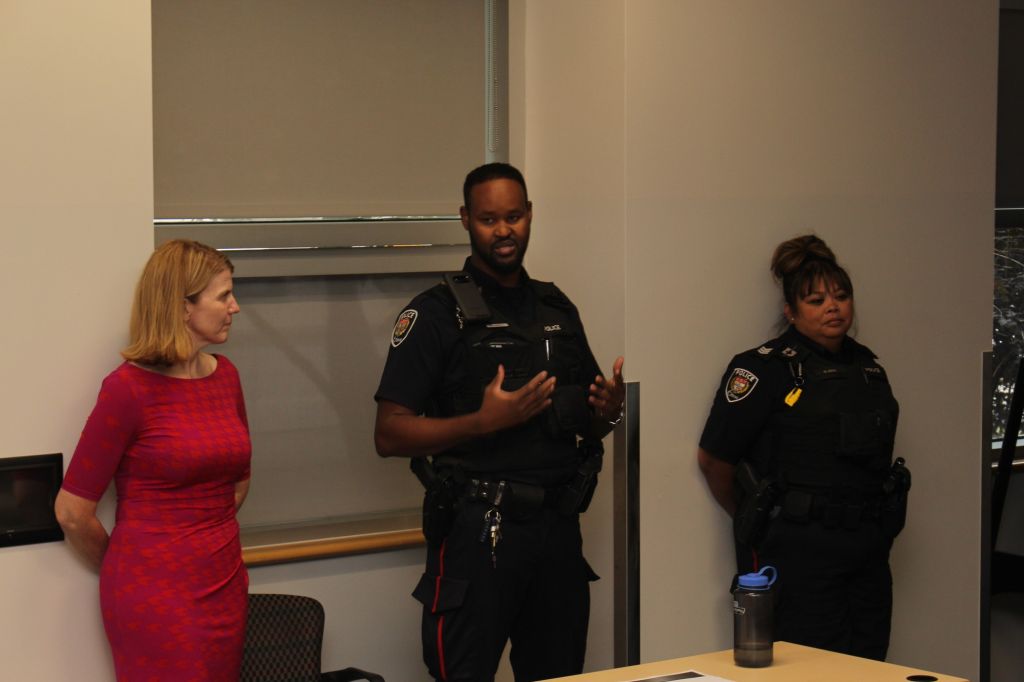 Const. Abdul Ahmed grew up in a low-income neighbourhood where police roamed the streets on a daily basis.

“It was not a place where people really liked to see police,” Const. Ahmed told a classroom full of police foundations students. “It was a neighbourhood with a lot of drug use, gang activity and police presence was huge.”

This is what encouraged him to become an officer.

On Sept. 20, he and members of the Ottawa Police Service recruiting team encouraged the students to network in their effort to become police officers.

“You guys are in this program at a very good time because the Ottawa police is hiring 500 police officers in five years starting 2019,” explained Sgt. Maria Keen of the outreach recruiting team for the Ottawa Police Service.

Keen is a graduate of Algonquin’s police foundations program and has been an officer for over 26 years. She had taught part-time at the college and has recently returned to teach first semester.

“The average age to be hired is 26,” she explained to the first-year students. “But the chief wants to hire younger officers [starting at] 21-years-old.”

Const. Abdul Ahmed has known Keen since he was 10 years-old and explained that by seeing her interact with others it really helped him respect the uniform and inspired him to be like her.

Ahmed explained that Keen was the community police officer for the area and she would bring the other officers to his neighbourhood to expose the residents to police.

“The police officers who did come always took the time to speak with us and say hi,” said Ahmed. “They engaged with us and that helped me see policing from a different light.”

Ahmed was hired at age 26 and works on the front line patrol where he responds to general duty calls and 911 emergencies. He is on a six-month temporary assignment for the outreach recruitment team.

“Recruiting was never in my forte,” said Ahmed. “But when Sgt. Keen approached me and told me she was putting together a team of officers to recruit and attract candidates to our service, she thought I would be a good fit. Sgt.Keen and I see eye-to-eye, we have a very similar understanding of what’s needed in our service.”

Ahmed had started the police foundations course in 2009 and graduated with honours in 2011.

“I was very interested in pursuing policing as a career,” he explained. “I did a lot of research before I applied to the college. I met with Lisa Gerrard and Maria Keen and they put me in contact with a few recruiters from the Ottawa Police Service. I was given pointers and tips as well in order to be successful in the interview process.”

Ahmed explained that he was given advice on his resume and that he needed to diversify his volunteer experience as he was only focused on one area and didn’t have enough contacts. Ahmed took this advice to heart as well as other pointers and uses them today as a recruiter.

Ahmed was very determined and knew what his goals were. He was aware of what it took to achieve them and wanted to make himself as competitive as possible.

“What a better way to do that than with faculty who are police officers,” he said. “They have that wealth of knowledge that I wanted to tap into.”

One of Ahmed’s big goals was to be awarded the Ottawa Police Service Award of Excellence which was given to only one student from the graduating year.

“I spoke with Tess Porter, who was the coordinator at the time, and I told her of my goal and she helped me achieve that.”

Ahmed had received the award in 2011 by a sergeant and the Ottawa police at the ceremony.

Although Ahmed is currently recruiting and responding to 911 emergencies he is hoping to expose himself to the other areas of policing.

“I always saw myself on the investigating side,” said Ahmed. “I want to go to the general investigative section and work in the detective’s office.”

Ahmed is excited about the opportunities working for the Ottawa Police Service has given him and he encourages others to work hard and keep their networks open.

“You worked hard within your program [so] don’t lose out on your networks,” he said. “Build your networks, keep in touch with your contacts that you built. Finishing your program is the first brick you are putting down on that foundation.”

Const. Abdul Ahmed grew up in a low-income neighbourhood where police roamed the streets on a daily basis. “It was not a place where people really liked to see police,” Const. Ahmed told a classroom full of police foundations students. “It was a neighbourhood with a lot of drug use, gang activity and police presence […]

Const. Abdul Ahmed grew up in a low-income neighbourhood where police roamed the streets on a daily basis. “It was not a place where people really liked to see police,” Const. Ahmed told a classroom full of police foundations students. “It was a neighbourhood with a lot of drug use, gang activity and police presence […]