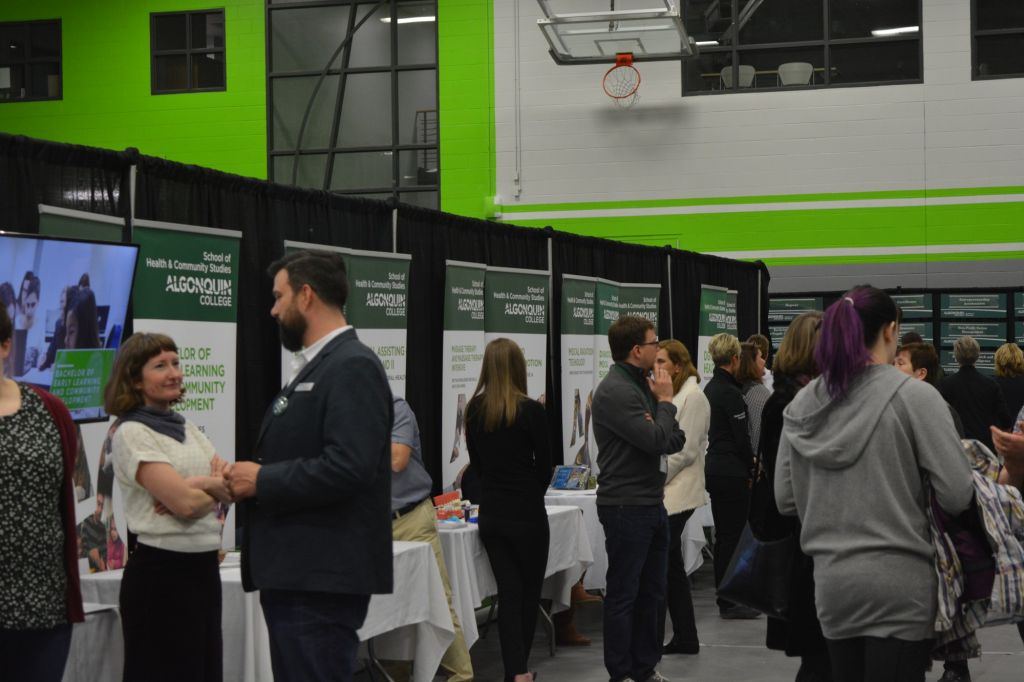 Algonquin’s gymnasium buzzed with chatter and questions as a crowd of 2,200 people gathered for the March Break Open House on March 18.

According to Anne Kalil, manager of Algonquin’s student recruitment and advancement, this number is the approximate total of prospective students accompanied by their family members and friends.

This was significant for the college, as the average turnout usually lands between 1,500 and 2,000 people. The event showcased the many programs and services that are available at the school.

It was one of three annual open houses the college organizes for prospective students, while the others take place in September and January.

“This is a real conversion time where people are solidifying decisions of where they want to go,” said Kalil, speaking to the importance of the March Break open house.

Kalil said that half the prospective students who attended the event are in high school while the other half are not.

Among the attendees was Brayden Forget.

The Osgoode high school student, who is interested in Algonquin’s computer systems technician program, said he is trying to decide between a university or college education.

But the hands-on approach to learning has Forget intrigued.

“(The faculty) were telling me about how the curriculum is based on government standards, which I thought was helpful,” said Forget, after visiting the computer systems technician display table. “I found that very interesting.”

Forget said he enjoyed “checking out what people in charge of the program have to say about it.”

While Forget has been accepted to both the University of Ottawa and Carleton University with scholarships, the security of a job after graduation seems more promising to him at Algonquin.

But while jobs are the post-graduation goal for many, students interested in Algonquin’s apprenticeship programs must already be employed.

He said that more than half the questions he received at the open house were about the workings of an apprenticeship program.

But many of the prospective students don’t realize what an apprenticeship entails.

“There’s common misconceptions,” said Glennon. “I try to clarify what each course has to offer.”

Questions about the difference between university and college is something Tamra Alexander, coordinator of the paralegal graduate certificate program, was frequently asked during the open house.

She said that many prospective students she encountered were university graduates looking to enhance their education.

“There’s certainly questions I get asked a lot,” said Alexander, who emphasized the value in being able to answer those questions.

“It’s always good to ask questions face-to-face,” she said, noting that not every answer can be found on a website. “It’s really good for reducing anxiety.”

Along with the many program booths, there was a table representing Algonquin’s Financial Aid. At the table, prospective students were able to calculate how much OSAP assistance they may be able to receive while attending Algonquin. With OSAP offering free tuition to some next year, it was also of interest to many present.