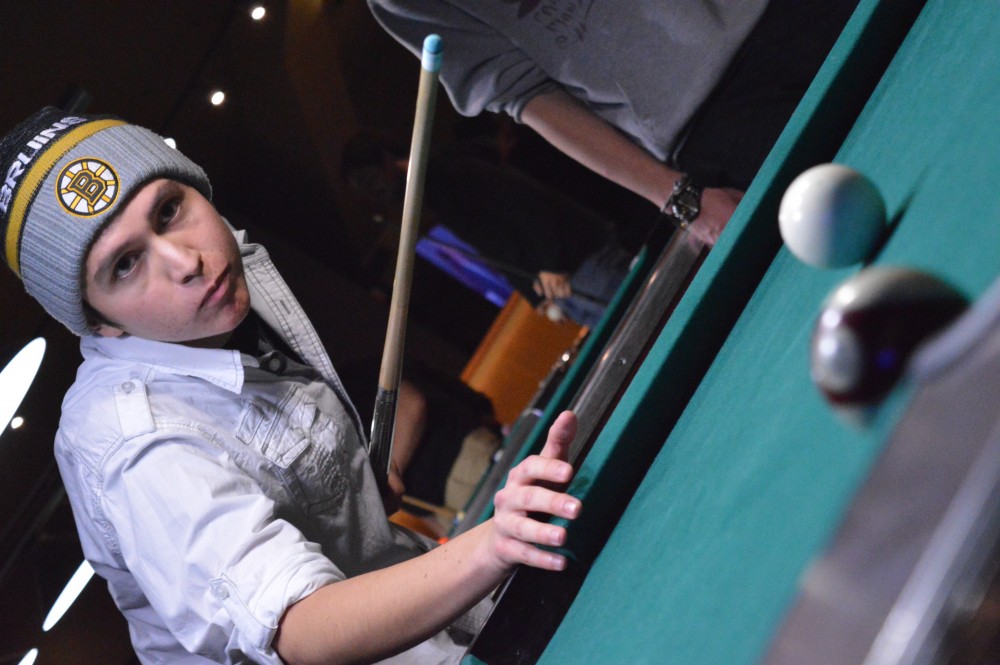 The spectators hush. The cue is lined up parallel with the eight ball, the shooter judging the angle of deflection needed to get that perfect sink.

Stephen Whelpdale, a first-year culinary management student, stabs the cue ball perfectly, delivering just the right amount of force. The eight ball bounces off the back wall and drops into the pocket at the other end.

The small crowd around the pool table erupts with celebrations.

Whelpdale, however, would have to be satisfied with second place as the team of James D. Johnson, 24, and Landon Sunday, 22, took first at the pool tournament in the Ob on Jan. 27.

The winning pair, both introduction to music industry arts students, took home an $100 Visa gift card each when they beat out the second place team of Whelpdale, 19, and Priyansh Bhargave, 19, a first-year business administration student.

Players of different skill levels and motives played in the tournament, where eight teams of two competed.

“My cousins are really into pool and I just wanted to be able to match them one day,” said Sunday on why he joined the tournament.

The tournament started in 2014 after Bill Kitchen, the events programmer for the Students’ Association, found out that the pool tables were always busy. He decided it’d be fun to give students a chance to earn some bragging rights around the college.

Joe St. Amand, 27, who works at the Algonquin Commons Theatre, remembered that when he was a student he would play pool at the Ob frequently between classes.

“I also used to be a lot better at this,” he added.

“I was drunk five times this week, and I came here and a friend told me it’s the tournament, so we played two games and it got started,” said Bhargave.