New students for Board of Directors 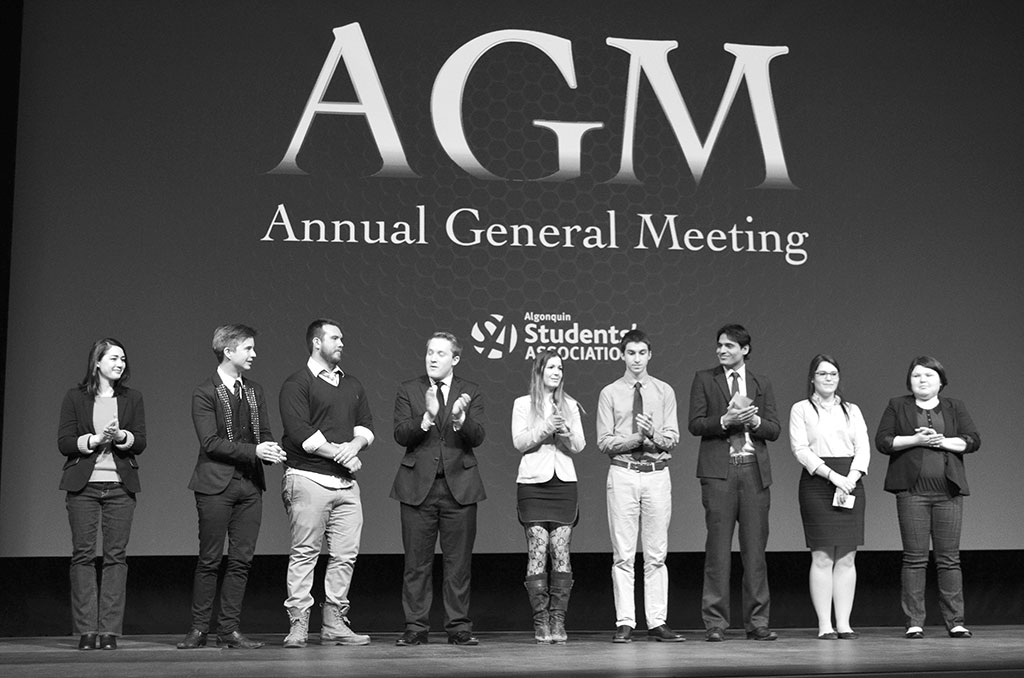 The nine candidates are appointed at the Annual General Meeting to the Board of Directors. They each stand on stage to be sworn in and are now preparing for presidential elections.

Nine candidates nominated by the selection committee were appointed to the Board of Directors at the Annual General Meeting held on March 12, leaving behind the two floor runners, Conrad Kott and John MacLaughlan.
“The role of the board is to run the corporation. It’s the highest decision-making body,” said SA General Manager Jack Doyle. “Half the board’s job is to listen to students to find out what their needs are.”
The nomination process is a tiered one. It begins with a nomination process in which a selection committee interviews the candidates and through that process recommends nine candidates to be presented for election. Doyle stresses that the committee must agree on candidate selection through consensus in order to present them to the board for approval. After the board approves them for election, candidates are presented for election at the AGM, in which all students are invited to attend. Doyle assures that even those who are not present are accounted for by a process called “proxy solicitation.”
“We solicit votes who cannot attend or choose not to attend. It puts the onus on the candidates to go out and collect votes for themselves. Even if you’re approved, you still have to be elected,” said Doyle.
The directors then nominate someone for president and vice-president positions; if there is more than one nominee for either position, a popular election results.
The meeting opened with the standard process of appointing a chairperson and approval of the agenda and minutes, followed later on by the approval of audited financial statements and the appointment of auditors for the year Jul. 1, 2013 to Jun. 30, 2014.
Current SA Vice-President Krisha Stanton then announced the candidates nominated by the selection committee, and introduced the two floor candidates Conrad Kott and John MacLaughlan. Out of the 32 applicants that applied this year, nine are selected by the committee.
The ballots were cast, and the nine candidates nominated by the selection committee were appointed to the Board of Directors. The two floor candidates were then thanked for their efforts, with Conrad Kott obtaining a total of 312 votes, and John MacLaughlan receiving 318 votes. Those elected to the board were then called where they were sworn in, igniting the campaign race for the presidential and vice-presidential positions.
The voting week for the presidential elections will be held March 24-28. Voting stations will open 9am to 3pm on Monday to Thursday, and Friday from 9 am to 1pm on Friday with polling stations located in the Student Commons, ACCE, the cafeteria, and in the Rotunda. Students at Perth and Pembroke can find their polling stations near the cafeteria and in “The Landing”. Those planning on voting will require a valid student ID.