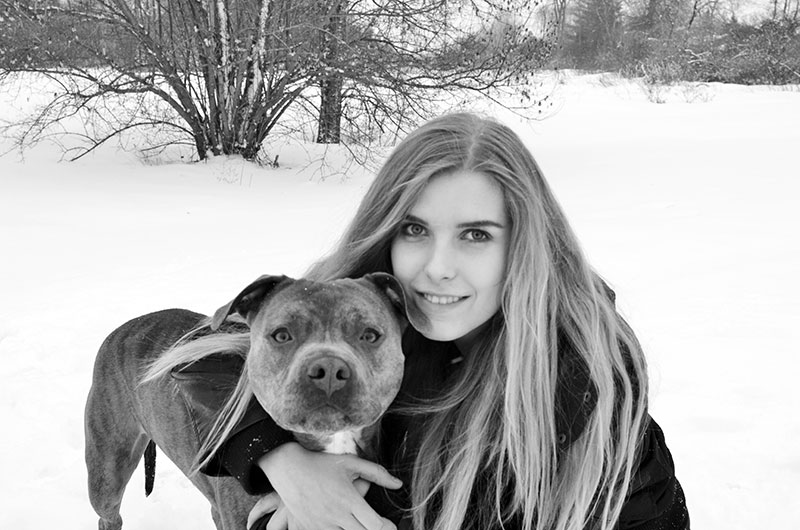 People for the Ethical Treatment of Animals (PETA) draws thousands of volunteers worldwide for countless demonstrations to their cause. But in Ottawa, the group has recruited 19-year-old Algonquin student Nives Brkic for a more unorthodox type of protest.

Brkic strips down to her undergarments in public to protest the cruel treatment of animals used for clothing and food.

The nearly-naked demonstrations take place throughout the year, be it swelteringly hot or frigidly cold. Brkic and long-time friend Emily Lavender participated in a “naked” protest in downtown Ottawa in 2012. It was Christmas time and below 20 degrees.

“I may be cold but it’s nothing compared to what the animals go through,” Brkic said at the time of the protest to passing onlookers. “If I can show a bit of my skin to save an animal being skinned alive, then it’s worth it to me.”

Brkic was born in Bosnia in 1994 and emigrated to Canada with her parents and younger brother after the Yugoslav Wars at three-years-old. Today, Brkic is a college student in Ottawa taking the child and youth worker program at Algonquin.

The purpose, Brkic said, of baring herself in the public eye is to increase general knowledge on the harvesting process animals undergo for their skin, fur or meat.

“When people look at authentic fur or leather they see it as a fashion statement,” Brkic said. “What they don’t see is the animal itself; the dirty, cramped cages they live in before slaughter. A place where they suffer from disease, where they go insane and they’re separated from other animals. People don’t see that when it comes time for an animal to be killed they’re either anally electrocuted, skinned alive or have their throats slit.”

“People need to stop buying from pet stores and breeders and start spaying and neutering their animals,” said Brkic. “This is the root cause of the animal population crisis. There are too many animals and not enough homes. PETA takes the calls no one else wants to deal with… to ‘euthanize’ means to give a peaceful release.”

On the day of her plate demonstration Brkic remembers an unnamed woman who approached the plate and accused her of selling her body and anti-feminism.

“To me, telling a woman to cover up her body is sexist. We live in a world where men can wear whatever they want without shame,” Brkic said. “But for girls we absolutely have to cover up our body parts–cover up everything we can… I’m a volunteer, I have a choice, I have the right as a woman… to show my skin without being attacked for it.”

Brkic works for Angie’s Models and Talent International, a modelling agency based out of Ottawa. As a modelling agency, their job is to showcase varied clothing lines made from different types of materials, including leather and fur.

“I’ll tell my designers I don’t feel comfortable with wearing animals… Worst possible scenario, I won’t get the job. My integrity and morals are more important to me than one job.”