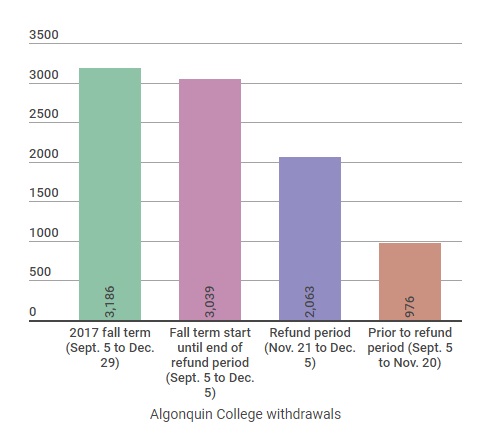 Although the Ontario college strike led to student withdrawals across the province during an initial refund window, the withdrawals have continued into the month of December.

Algonquin had officially reported a total of 2,063 withdrawals to the province as the total for the refund period, which lasted from Nov. 21 until Dec. 5. These included 1,900 domestic students and 163 international students.

According to In data supplied to the Times after the refund period, however, there were 3,039 withdrawals that took place from the beginning of the fall term up until, and including, Dec. 5.

Further, the withdrawals continued into the month of December. A second set of data provided to the Times on Jan. 3 showed the total number of withdrawals had increased to 3,186 by Dec. 29.

In total, the province had more than 25,000 withdrawals after the five-week work stoppage – an approximate 10 per cent of all Ontario college students, compared to the estimated annual 2.55 per cent.

By contrast, St. Lawrence College has reported 400 withdrawals, Fleming saw 743 and 1,890 students withdrew from Fanshawe. But these colleges have fewer students so they may have experienced the same ratio as a percentage of the total.

All 24 Ontario colleges had offered an initial two-week refund window from when classes resumed on Nov. 21 until Dec. 5, where students were given the chance to receive full reimbursement of their school tuition fees with no academic penalty.

This was the first time in the history of Ontario colleges that such an opportunity has been provided to students.

Algonquin also extended the period for students withdrawing from studies without academic penalty from Nov. 10 to Dec. 15.