You are here: Home / Featured Stories / News / More awards nominations for the Times 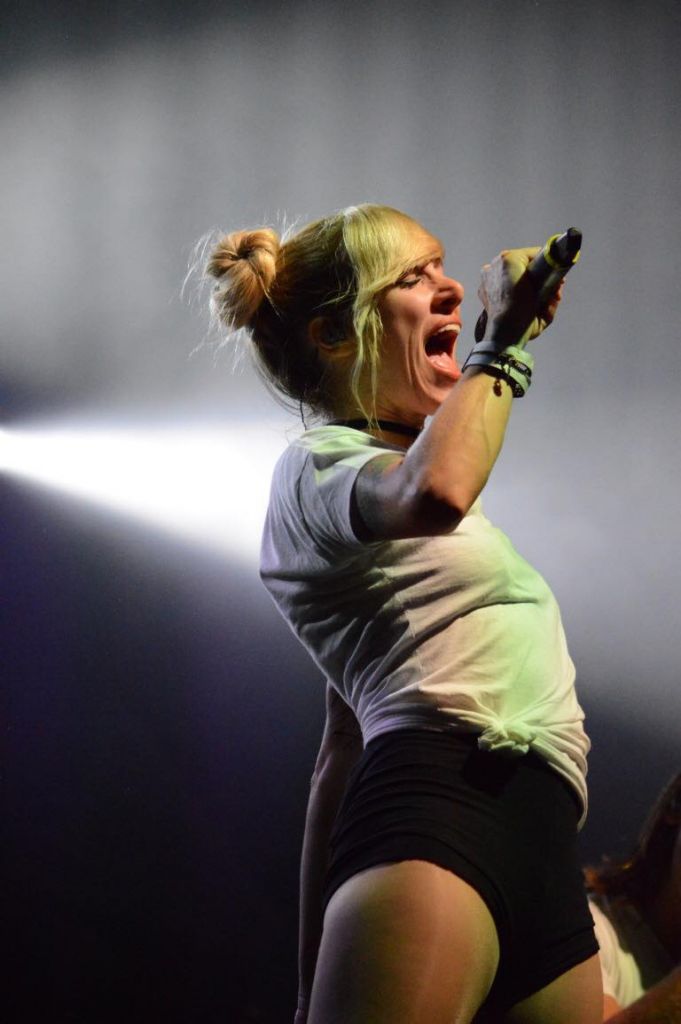 This photo take by Algonquin journalism graduate Nicole McCormick is in the running for best Student Photography in the OCNA competitions. It shows singer-songwriter Sarah Blackwood, of the indie-rock band Walk off the Earth, performing during Algonquin Orientation Day in September 2016.

Two second-year Algonquin journalism students, a graduate and the Algonquin Times itself have been nominated for a number of awards sponsored by the Ontario Community Newspapers Association (OCNA) in its 2017 Better News Competition.

2017 grad Nicole McCormick, second year journalism students Rebecca Atkinson and Devyn Barrie, as well as the Algonquin Times paper and website editions, are all among the finalists nominated.

They’ll learn on April 20 whether they won first, second or third in those categories.

McCormick, former editor of the Times, is nominated in two categories. The first is Student Photography, based on a photo she took of singer-songwriter, Sarah Blackwood, of the indie-rock band Walk off the Earth, who was performing on stage during Algonquin Orientation Day in September 2016. It appeared in the October 2016 edition of the newspaper.

The second of the two categories is for Student News Writing, which was for the article, Putting a price on student work. The entry was about how CBC attempted to get Algonquin graphic design students to do animation work for them without an internship and without paying them, which is illegal according to Ontario’s labour laws.

“It was the most time and effort I ever put into any story that I wrote for the Times,” said McCormick. “I knew that it was a really important story and wanted to do it justice.”

CBC noted in a statement that was sent out to McCormick that they had put an end to all unpaid partnerships with student animators.

McCormick is very thankful for the help and guidance that she received from her professor, Julie McCann, for helping to make her story such a success.

“Just knowing that the story made some kind of a difference and that hopefully no other student would be put in this situation again makes me feel pretty proud.”

Atkinson, a second year student who will graduate this June, and another former editor of the Times, was nominated under the category Student Feature Writing for a profile piece on Stuntman Stu Schwartz, that she originally wrote in her first semester, called One year later, still #StuStrong which appeared in the February 2017 edition of the newspaper.

She decided to write about Schwartz because of his fight with leukemia and all the attention and support he gathered from his #StuStrong foundation campaign. But there was no follow-up about how he was doing and where he was at now in his life.

“It was definitely a piece I worked really hard on. Didn’t really know what kind of result it was going to yield because it was the first feature I had ever written,” said Atkinson.

Something that she was most proud of when she was going through the process of interviewing and writing the story was Schwartz’s honesty.

“Little did I know that had I gone home that night,” said Schwartz. “I likely would’ve died in my sleep.”

The Times is also nominated in the Campus Newspaper category which judges the entire newspaper including editorial and advertising content, and Best Campus Website. Devyn Barrie, a classmate of Atkinson, was given an Honorable Mention in the Student News Writing category for his article Ballooning maintenance backlog ups pressure on colleges.

The Times will learn where it placed in each of these categories at the OCNA awards Gala, which will take place on Friday, April 20 at the Sheraton Parkway Toronto North Hotel in Richmond Hill, Ont. as part of the association’s annual conference. Follow @algonquintimes to learn the results when the envelope is opened.

More awards nominations for the Times Reviewed by Tyrell James on April 11, 2018 .