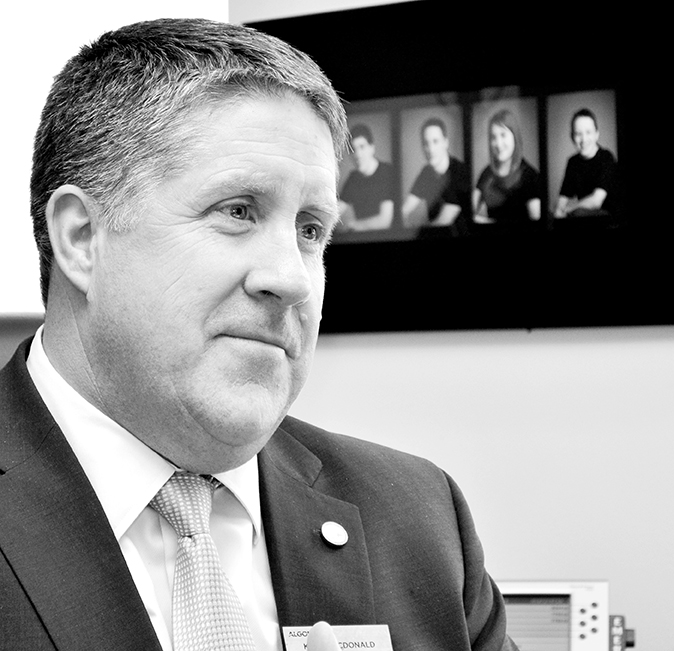 Kent MacDonald announced he would be leaving for St. Francis Xavier University on March 21. He has served as president of the college for two years.

He has lived in Ottawa for a quarter of a century, but in the end the chance for Kent MacDonald to go back home was simply too great to turn down.

Algonquin’s president will officially be leaving office on July 31 to return to his alma mater, St. Francis Xavier University, as its president and vice-chancellor.

“It allows me to go home,” said MacDonald. “This allows me to go back to another institution that I quite admire, one that is rich in history. But mostly it’s about going back to Nova Scotia and trying to make a contribution there.”

A native of New Glasgow, N.S., MacDonald got his Master of Education from StFX as well as a Bachelor of Science in Physical Education.

His parents now reside in Halifax, two-and-a-half hours south of the university in Antigonish.

“The most difficult part (of leaving), was the friendships that I’ve developed here with our faculty and staff… the people is what I’m going to miss most. It’s not so much the buildings and technology that I’ll miss but it’s what’s in them, the people.”

MacDonald has served Algonquin College for the past 16 years, beginning at Pembroke campus and working his way up the ladder, ultimately being appointed president in 2012.

“He is a strong leader, but also a wonderful, humble person,” said Tracey McDougall, executive assistant to the president. “There is no ego emanating from C520. He is simply a person who truly cares. Filling his shoes will be a daunting task.”

Since he took over the position MacDonald has overseen the college’s launch of international campuses in Saudi Arabia, with another in Kuwait set to open this fall.

“This is going to be extremely important to find alternative revenues going forward,” said MacDonald. “We are going to continue to see really difficult financial days ahead. Do we want to hope the government is going to help us, or are we to control our own destiny? Being entrepreneurially focused, seeking out resources to reinvest here I think will be important.”

Along with saying goodbye to friends, family and his beloved Ottawa Senators, MacDonald leaves behind a legacy at Algonquin of open communication. A self-described “players coach,” MacDonald got his energy from talking to others and made every effort to get to know his staff and students during his time here.

“Student success is his number one priority,” said Sherline Pieris, Students’ Association president. “Whenever (the SA) had a question or we needed anything addressed with different people in the college we’d, go to him and he made sure it happens.”

One of the factors that excites him about StFX is the smaller enrollment numbers. He leaves Algonquin, a school of close to 20,000 students, for a school of about 4,200. He feels the tighter community will allow his hands on approach to be that much more effective.

“If there was one piece of advice that I would give the new president it would be: remember that this office is meant to be in service of the faculty, staff and students,” said MacDonald. “How do you support the faculty and staff in order for them to provide a great experience for the students? That means being their advocate, their champion and seeking out resources to reinvest here. That’s the type of leader I think I am, and that’s the type of leader I think you should have. But it’s out of my hands.”