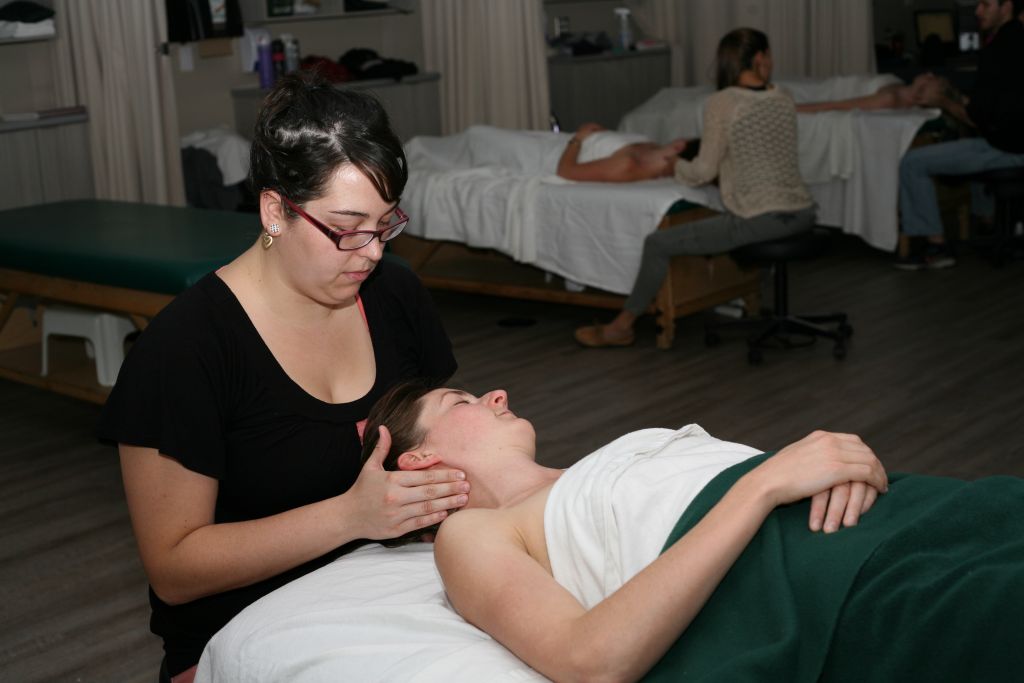 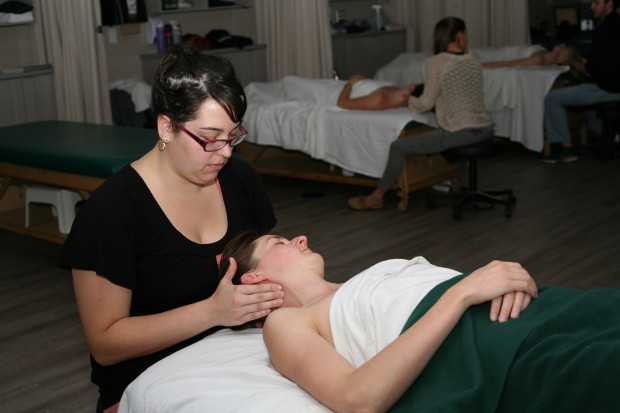 Students in the massage therapy program are working and studying in stairwells and hallways due to the lack of space, weeks after the completion of the new facilities.

So how do the facilities really measure up? Differing opinions are causing growing tension.

Complaints range from unprofessional client seating area, to unfinished facilities, lack of space for students to work or study and being grouped with esthetics programs, as opposed to other healthcare professionals.

The previous facilities were in J-building’s healthcare field, next to the dental hygiene program. They are now located in A-building, with the hair stylist and esthetics programs, which have recently opened their new esthetics spa.

Third-year students Kate Fishwick and Cailey Schaffler, who began their program in the original facilities, are none too pleased with the relocation.

“It’s basically like a spa idea. We just don’t feel like it’s fair. We go through a lot of extensive training and our classes are very in-depth,” said Fishwick.

“It’s extremely difficult and now we’re grouped together in a spa setting,” she added. “Spa and massage already get a negative connotation involved with that. It’s just kind of disheartening. I don’t want to come to class and be seen like I’m doing a little massage.”

“Massage therapy is one of the programs that makes the most money for the school. We run the clinic five days a week, $30 a massage, each student does two massages. If each student had two clients booked in every night, and all students had that, the school would be making six grand a week off of us,” said Schaffler.

Schaffler questions why with such profitability, the program has not received better facilities.

The clinic to which Schaffler is referring is open to the public and runs Monday to Friday from 4:15 p.m. to 6 p.m.

Some feel another area in which the new facilities are lacking is the clinic’s waiting room.

There’s a large area with circular-shaped sofas. However, this area is not designated for clients. It doubles as a lounge area for students, lacking any signage or separation to signify it’s a professional, clinical waiting area.

“This was the first stage of three. But with every plan, it’s contingent on money and availabilities of programs, so the vision is not a short-term vision, so there should be more (renovations),” said Mohring.

Mohring explained unavoidable expansions in the dental hygiene program as one of the reasons for the move to A-building.

“I’ve been with the program for 15 years and for the first time we have a storage area,” said Mohring. “It’s a huge improvement.”

Sarah Raymond, a first-year student in the massage therapy’s intensive program, which compresses the three years of training into two, also noticed problems with the new facilities.

Raymond had previously been a client at the old facilities.

“They had a fabulous waiting room. It looked like a true clinic as it would be in any other medical office. It wasn’t quite so…unprofessional,” said Raymond.

Now, spacing has become such an issue that students in the program are studying in staircases and hallways.

Lacking any designated space to sit and work is difficult for such a demanding, hands-on program.

“Even if we just had a meeting-sized room for study purposes, otherwise you do end up in the stairwell or sitting beside lockers,” said Raymond.