Not just a run of the mill guy 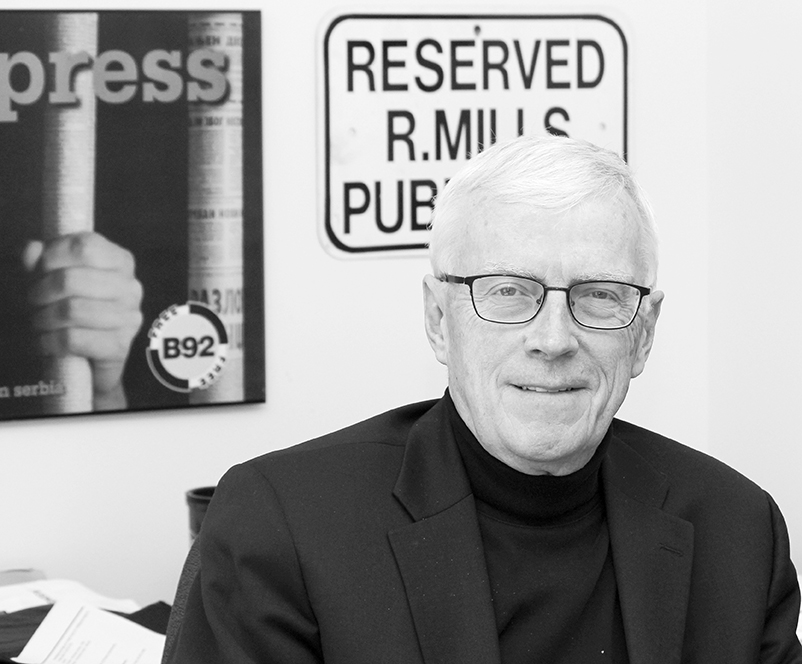 Russell Mills is the dean of the Faculty of Arts, Media and Design. Before coming to Algonquin, Mills had a diverse career in the newspaper business.

After 11 years at Algonquin, the dean of the Faculty of Arts, Media and Design will be retiring from his job at the college this July.

Dean Russell Mills will be leaving the college but will continue to be involved with other organizations, including his role as the chair of the National Capital Commission.

There are many things he will miss about Algonquin but he is pleased with the changes that have come to the faculty during his time as dean.

“There are great people to work with here and we have a lot of wonderful teachers and good support staff,” Mills said about the college community, “people that I’ve really enjoyed working with over the last 11 years. So I’ll miss them.”

Mills will not only miss interacting with his coworkers but with students as well.

“Being around a group of energetic young people does good for older people like me I think,” he said. “I’ll have to find a replacement for that.”

Mills has a background in the journalism industry. He has worked at many Ontario newspapers in diverse roles, including the Ottawa Citizen where he worked as a publisher. In 2003 he joined the Algonquin community and changed gears to a role in education.

The walls above his desk at the college are now decorated with several references to his time in the newspaper business.

According to Mills, the skills he gained from his previous career in journalism were applicable to his role at the college. This is largely because he feels comfortable working with creative people like writers, artists and photographers. These are the type of people you can often find in the Faculty of Arts, Media and Design.

“I’ve had a lot of experience working with creative people and trying to create an environment where they can do great work, motivating them,” said Mills. “So, since I’ve had quite a bit of experience in that in my previous career, that’s one thing that I was able to bring here.”

One of the challenges that Mills has faced is finding innovative ways to respond to the needs of employers and making sure that Algonquin grads are skilled in what they are looking for. This has led to changes in some programs during his time at the college and the introduction of new programs including game development, music industry arts and professional writing.

“We have been able to keep the curriculums up to date, I think pretty well,” Mills said.

According to Nadine McInnes, a professional writing professor, her program has expanded since its introduction and now includes full-time field placements.

“We’ve almost doubled our intake since 2006 and refined our offerings to develop writers for the diversity of roles they might play as both creative and organizational writers,” stated McInnes.

An achievement that Mills is particularly proud of was the result of a survey Algonquin held last year regarding employee engagement and morale. The Faculty of Arts, Media and Design had the highest level of employee engagement in the entire college.

“Not just in the academic area but everything across the college, so I was pleased with that too,” he said.

Mills claims that his goal was to create an environment in the faculty where people felt they could do their best work.

While Mills is retiring from Algonquin he plans to continue his work with the National Capital Commission and the Michener Foundation.

“My appointment at the NCC is for five year terms, I’ve served one and I’m two years into the second one,” he stated about his role as chair of the organization. “So, I have three more years at the NCC.”

Though Mills’ career has diversified in recent years he still holds respect for the journalism field that he has participated in for so long. He has been president of the Michener Foundation for Public Service Journalism since 2010. The foundation recognizes outstanding excellence in Canadian public service journalism in both print and media formats with the annual Michener Award.

“There are some big challenges in journalism these days. The old business model for the traditional news media, newspapers, television, is kind of broken now,” Mills explained.

“The Michener Award helps to inspire public service journalism and has for 40 years, so I will be continuing on with that.”

Asked what message he would like to give to students as he is retiring, Mills emphasized the importance of being able to respond to changes in their chosen industries.

“Change in a lot of the industries that our programs serve is just beginning,” he said. “There’s going to be enormous change in coming decades too and it’s very important that everybody be flexible and be willing to learn and adapt to these changes.”