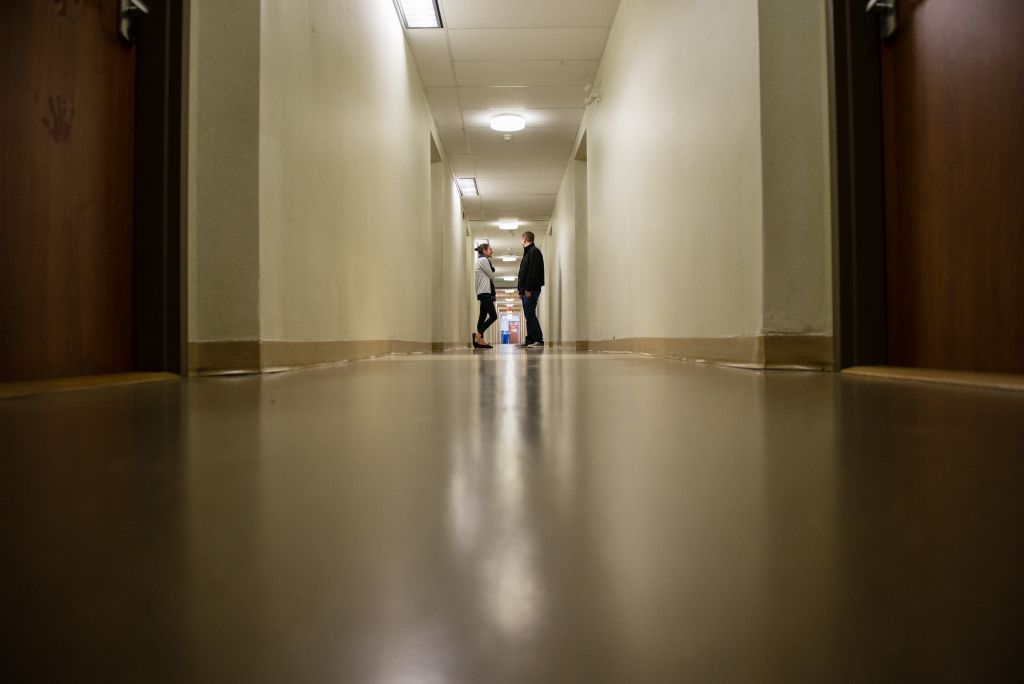 Drug related callsmade up 38 per cent of all residence security incidents in 2013 according to Safety, Security and Emergency Management's annual statistics report. Security services says the majority of those calls are related to the smell of marijuana.

A cell phone video recorded by the Times that appears to show a student cutting lines of cocaine in Algonquin’s residence has sparked response from college officials.

The video, recorded in early September, shows a male student sitting in a chair, using his driver’s license to cut the lines on his residence desk. He appears to be intoxicated, and verifies the authenticity of the cocaine with an off-camera speaker — a Times reporter — who asks the student what he is doing.

Throughout the minute and 24 second video, the student trades jibes with the reporter and raises topics such as popular novelists, book titles and the respective programs they are enrolled in.

“It’s good rock,” the student mutters, referring to the cocaine, at one point. When asked about the drug’s origins, a younger man steps into the frame briefly to say, “I got it from my boy in Deerfield,” alluding to the apartment block near the college.

The student handling the cocaine then mumbles, “there is much more to come.”

The video recording then ends.

The Times has chosen not to make the video available, but rather showed an edited version (altered to protect the identity of those in it) to Earl Green, coordinator of the college’s security investigations on Oct. 1., who questioned the role of the Times in recording the video in the first place. He warned that it could be in contravention of various college student conduct policies.

Under the college’s own 2014-15 Residence Handbook and Residence Community Living Standards, listed under personal safety, the rules clearly state: “Illicit drugs are not welcome in residence. Do not bring them to residence and do not use them.”

“What would you like us to do?” Green asked. “Search every person in residence?”

However, Green later admitted drug use on campus is a complex and pressing issue.

The statistics back that up. There were nearly 70 times as many drug incidents reported at Algonquin’s residence in 2013 as there were in 2009, according to data provided by Safety, Security and Emergency Management (SSEM) in 2013.

So it didn’t come as a surprise that on the night of Sept. 12, the Algonquin Times was able to find, with relative ease, drugs in the form of offers of marijuana, MDMA and cocaine — all within an hour-and-a-half of signing in at the front desk.

But Green maintains the jump in statistics is explainable.

“We have a higher rate of drug related incidents because we’ve had an increased (security) presence in residence last year, and we would respond to things the average police officer doesn’t,” said Green. “Our guys will generate an occurrence, while a police officer will say ‘put it out.’”

However, drug calls made up 38 per cent of all residence security incidents in 2013 according to SSEM’s annual statistics report.
“The majority of those 38 per cent is in response to smell of marijuana,” said Green. “The response is generally in regards to our no-smoking policy because it is a danger to smoke in res; it is a fire-hazard.”

Current policy now dictates that residence advisors (RAs) attend to matters of marijuana smell rather than security officers, in an effort to combat drug use through education rather than enforcement.

“Our residence is quite safe,” he said. “We have great partnerships with the residence life people.

“The RA’s are on patrol…there is a Residence Life coordinator on every shift.”

Residence life coordinator, Stephen Marchment, could not be reached to confirm that or to comment, even after questions were emailed to him in advance on Oct. 8.

However, on Oct. 17, Marchment finally responded and said, “When managing students who are found using an illegal substance, or in possession of an illegal substance or related paraphernalia, we follow the policies and procedures that are outlined in the Residence Handbook, as well as offer them some of the resources that are available in the Residence and on Campus.”

One residence advisor, however, who spoke to the Times on the condition of anonymity, said that while weed busts are frequent “there are definitely hard drugs in (Algonquin’s) residence.”

When asked to speak to the prevalence of hard drug use in residence however, Green said that “in comparison to the rest of reports we receive about residence, (hard drugs) would be less than one per cent.”

This statistic mirrors information available from Ottawa Public Health’s Ottawa Student Drug Use and Health Report. According to the 2014 report, only three per cent of grade nine to 12 students reported using cocaine (although 21 per cent of them said it would be fairly easy or very easy to obtain).

Green hypothesized there are potentially five or six users out of the roughly 1,050 students in Algonquin’s residence.

“I’d be lying to you if I say they weren’t there…you have to look at the college as basically a small city,” Green said. “Wherever you live you should be concerned about drugs.

When asked if Algonquin residents or their families should be concerned about drugs at Algonquin, Green said the responsibility lies with the parents.

“Parents do have a responsibility for setting an example…our residents are not children.”

Despite the youngest resident being 16 years of age, he added that parents and their children need to have a serious conversation about drugs before moving away to college.

“For both alcohol and drugs, the biggest thing comes down to education,” said Green.

Yet, despite partnerships with Residence Life, Counselling Services, and Health Services, Green’s security team is limited when it comes to heading any education campaign.

“Are we actively engaged in an anti-drug campaign?” he said. “No, I would say not.”

This sentiment was echoed by Sandra McCormick, manager of Health Services.

“We do know there are a lot of drugs out there,” she said. “Alcohol is the easier one to deal with and to provide awareness about.”

The complexity of drugs and due to the fact they are illegal to consume, makes the conversation difficult to have with the student body.

“We don’t know how we would approach it…there isn’t really a strategy to talk about illicit drugs,” McCormick said.

Commencing this semester, Health Services will provide a counsellor from the Ottawa Addiction Access and Referral Service (OAARS). The trial service is free for students who are concerned about their drug or alcohol use.
“The best we can do right now is partner with OAARS to help people with their addictions.”

She later clarified her statements by saying, “we do know there are drugs out there.” “Alcohol is the easier one to deal with as students tend to be more open about their use”.

“ Due to the fact that drugs are illegal to consume, related conversations are more difficult to have with members of the student body”.

“Our Health Services and overall Student Support Services’ strategy on campus is one of education and awareness. Additionally we refer students to appropriate community services as needed.  This year we are partnering with Ottawa Addiction Access and Referral Services (OAARS) to pilot an on-campus service that is free for students who are concerned about their drug or alcohol use.  We are also actively engaged in the Safe Ottawa Drinking Alliance (SODA) in alliance with numerous community partners.”
But for those caught in possession of or trafficking drugs in residence, a swift response from the college is guaranteed.

“It could be jointly with our partners in law enforcement or singularly through the student conduct board,” Green said.

The student conduct board process, said Green, is more effective than dealing with student delinquent behaviours than the criminal justice process due to its educationally-entrenched approach.

On average the board hears 40 hearings a year, with about a quarter of those being drug-related, according to the board’s chair, Dave Donaldson.

Conduct reviews are intended to determine whether a student has violated the college’s student conduct policy and to impose sanctions if a violation has been committed.

However, the board doesn’t discriminate between hard and soft drugs under section 2.3.13 of Algonquin’s student conduct policy: Possession of, or trafficking in, a controlled substance as defined in the Controlled Drugs and Substance Act. So whether a offender has possession of marijuana or cocaine, they will be treated the same.

“I cannot differentiate as far as policy is concerned,” he said.

Donaldson said he couldn’t recall any conduct hearings where students were involved with hard drugs in the past three years although that is “probably because the use of hard drugs is so serious that it has been dealt with by the Ottawa Police Service.”

After viewing the same video shown to Green, Donaldson said, “the use of hard drugs like cocaine definitely takes it to a level that contravenes the law.

“It is concerning that students need to rely on that type of crutch while attending school.”

The sanctions handed down from the conduct board for using hard drugs vary. Normally, the conduct board would recommend a behavioural contract to outline which behaviours the student is barred from exhibiting. Essentially, “a cease and desist order,” Donaldson said.

As reports of illegal behaviour rise, with minor drug use more common than ever, the contemporary college experience is marked by the question: is student safety at risk?

“We do control our house really well,” said Donaldson.

Algonquin’s new president Cheryl Jensen said she couldn’t comment on the video after it was shown to her, “because there is no proof of what (the substance in the video) was nor was it officially reported.”

“We are diligent,” Jensen said. “I am not overly alarmed.

“I am confident we have everything in hand.”

Jensen emphasized college resources are available to help students deal with their emotional issues that may encourage drug-seeking behaviour.

“With any type of health issue, prevention is better than treatment so we are trying really hard to let students know there are supports and that they don’t have to turn to drug or alcohol use.”

Yet, when informed that both Security and Health Services are not formally officiating any anti-drug discussions with students, Jensen said it may be time for a change.

“I know the college supports national alcohol awareness week, though I don’t see any reason why we can’t tie that in with an overall drug and alcohol awareness,” she said. “It’s a good idea actually.”