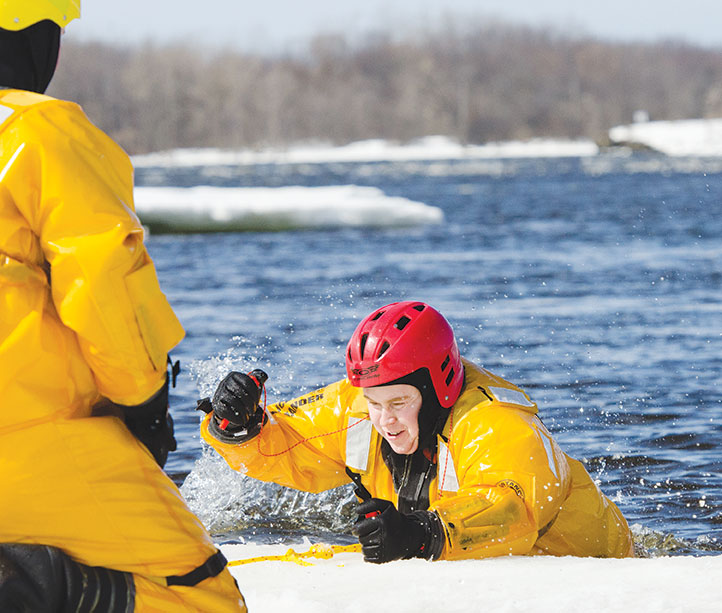 With my upper-body straddling the Ottawa River’s ice-shelf, I thrashed feverishly in the freezing water, trying desperately to lift, pry and chip away at the slender fin of frozen fresh water in front of me.

“You’ll lose consciousness,” he said. “In less than an hour.”

Despite warnings to remain calm, I was panicking and wasting precious energy in the process. Cold shock response produces a sort of single-mindedness that has been the cause of many rescue situations. The reflex action of hyperventilation is the first in a series of mistakes that can end in tragedy.

And as much as it sounds as if it was risky, it was part of an annual ice-rescue water exercise on March 11 and 13 for pre-service firefighters.

I was playing the victim, and it was no easy job.

Outfitted in a waterproof blaze yellow Ice Commander survival suit, I spent an hour bobbing up and down in the icy waters without feeling a thing.

“They are asking themselves what is happening, what could happen, and which method of rescue is appropriate under the circumstances.”

On both days, students found themselves at the end of Britannia Road, huddled together on a huge slab of ice. The island of ice would bob up and down disconcertingly, slowly sagging as it tore away from the larger shelf.

Wearing thousands of dollar’s worth of personal protective equipment ranging from Ice Commander suits, helmets and ice picks, the would-be firefighters practised rescuing themselves and others from the hazards of cold water and ice formation.

“We start by self-rescue, where we put them in the water and they have to try to get out onto the ice,” said Henry Valois, program instructor and volunteer captain with the city’s fire department. “We have ice picks that they can use, to get grip, so they learn how to use all the equipment related to ice rescue.”

Supervised by qualified ice-rescue technicians from the city, as well as a dedicated safety officer, students were told tonever break communication with the victim, or each other.

“They have to take this seriously because it is life-safety,” said City of Ottawa water rescue firefighter technician Stephen Kitchen.

Kitchen isn’t joking. Canada averages 400 water-related deaths per year. His colleague, and the exercise’s safety supervisor, Ken Walton, said Ottawa firefighters respond to an on average of 150 water rescue related calls a year. And with spring approaching, it is only expected to get worse.

“It is going to get busier as the weather gets nicer,” Walton said. “With more people going outside, there’ll be a rush of incidents we’ll attend to.”

It’s bad news for Ottawa as urban Canadians are more likely to be unfamiliar with preventive measures for falling in cold water according to a 2013 report by the Canadian Lifesaving Society. With balmier weather on the horizon, the Red Cross says ice strength can weaken ice by up to 50 per cent for 24 hours following a warmer day.

At the beginning of the training session, one of the “victims” required assistance before even slipping into the water, faced with the challenge of putting on the suit itself.

That victim was me.

The thermal-lined interior hugged my body tightly with pressurizing force. Enlisting the help of a nearby instructor to help do up the suit’s body-length zipper, I instantly relived the experience of having my mittens duct-taped to my jacket as a child.

From then on, my technical manoeuvring was limited to waddling like a newborn penguin.

Once in the water, I found myself floating down what a water park might call a lazy river, except this was no tropical paradise.

Dividing the coastline into zones was the first action students took when they arrived. The river itself was named the hot zone, while safer areas like the shore and beyond were classified as warm and cold.

Rachel Bekkers was enjoying the field trip, as she cast another rescue rope to her male colleagues flowing down the river.

“It’s an awesome experience,” the first-year student said, reeling in her catch. “I never thought I would be able to do this.”

Having already received both lectures and labs on water and ice rescue, 19-year-old Kevin Matthews was eager to practise outside of the classroom. “I definitely feel a lot more comfortable with water rescues than if I hadn’t done this training,” Matthews said. “But now it’s all part of the job.”