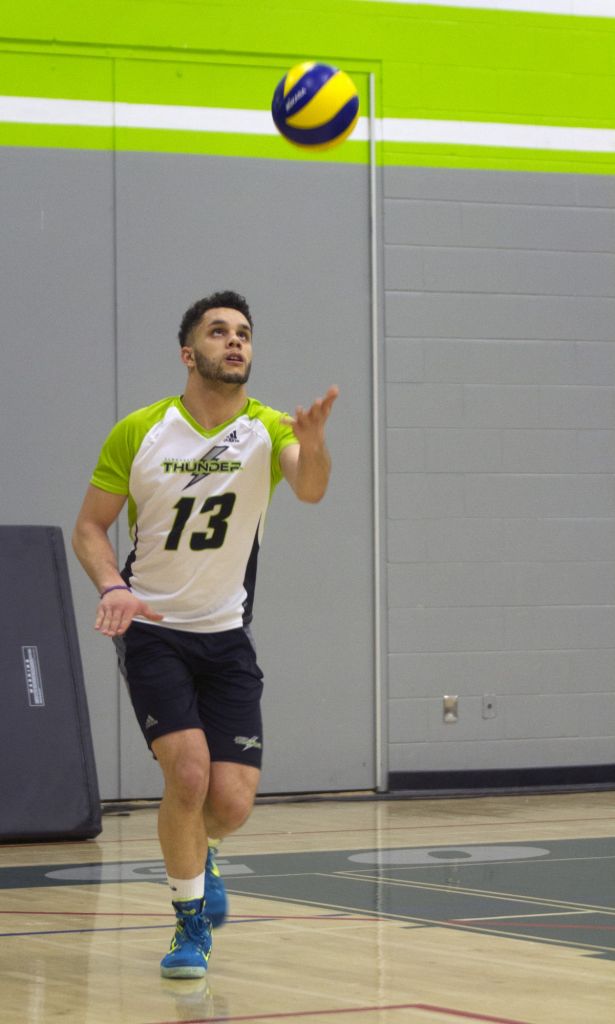 Coming off their first road-win of the season, the Algonquin men’s volleyball team lost its next two home games against the Durham Lords and the undefeated Georgian Grizzlies on Jan. 20 and 21.

The Thunder knew that facing the top two teams in the East division in consecutive days wasn’t going to be walk in the park.

“It’s going to be tough,” said Algonquin head coach Mohamed Shaheen before the game on Friday.

The Thunder competed very well, but ended up losing the first game in three close sets (26-24, 25-23, 25-20), despite leading by upwards of five points in the first two sets.

In defiance of what the box score indicates, it was one of the Thunder’s most inspired performances so far this season

“I’m very proud of these guys,” said Thunder player Jarrod McNaughton. “Our mindset was that we could compete with this team and we didn’t want them thinking they could just run us over. We fought hard and we battled all the way through. But it just sucks that we couldn’t pull it off in the end.”

The team’s level of effort and competitiveness were quite refreshing to see for the Algonquin coaching staff. But unfortunately the team still endures the same pitfalls that come with having very little experience.

“I liked everything we did,” said Thunder Head coach Mohamed Shaheen, “We executed very well, but we need to close out games a lot better. We were up 24-21 in the first set and I think 23-20 in the second. The guys need to learn how to finish those games, but that’s where the experience comes into play. Just because they’re the number one and two teams that doesn’t mean that they’re better than us. They just have the experience of playing together at a high-level while we have a few players that are just at the beginning of their volleyball careers.”

The Thunder had its share of offensive struggles as the Lords held them to a .172 hitting percentage with Josh Isaac leading the team with just 12 kills; his lowest total in his last four games.

He was also held to a season-low .154 hitting percentage and Jonah Nieman only delivered 11 assists; marking the least he’s had since Nov. 18.

“We struggled with our passing,” said Josh Isaac. “We couldn’t get the ball to our setters.”

Although the team lost, the players are still very proud of how they competed and how they reacted when faced with adversity, such as a powerhouse like Durham, who were 10-1 coming into the game.

“We’ve shown that we’re very good in underdog situations,” said Boileau. “We’re a great squad and we’ve proven that we can compete against the top teams. Our guys still fought no matter what and I’m starting to believe we now have that fighting edge that we didn’t have in the first semester.”

On Saturday, the Thunder played hosts to first ranked Georgian who were 11-0 coming in and hadn’t lost more than one set in a game all season.

Algonquin came out strong and delivered another highly energized and hard fought performance but once again they couldn’t hold on as the Grizzlies won the game in four sets (25-20, 23-25, 25-17, 25-21), marking only the fifth time they’ve lost a set in a game all season.

“We thought too much ahead of ourselves,” said Boileau. “It was the same problem as yesterday.”

With the win Georgian moved to 12-0 on the season keeping a firm grip on the number one seed in the East division, ahead of Durham.

He says that his team’s experience is what is able to propel them to such uncanny consistent play.

“We have a fairly senior team, with a lot of older guys who’ve been here before and that certainly helps us,” said Saxby.

Josh Isaac had himself a bounce back performance as he notched a team-leading 19 kills and a .325 hitting percentage. Nikita Yastrebov came in second with a season-high 11 and Jonah Nieman facilitated 28 assists in Saturday’s loss.

With the team’s offensive production noticeably better than it was on Friday, defence was also a key aspect of the Thunder’s game against the Grizzlies.

Algonquin finished with 17 blocks, with six coming from Jarrod McNaughton. Plus, they only had two total digs less than Georgian’s 59.

Once again, the team was happy with the performance despite the result.

“I would call it a successful weekend,” said Yastrebov. “We’ve been playing very well and those were arguably our two best games this season. We knew it was going to be difficult playing against the one and two seeds, but I’m really happy with how we performed. If we play like we did today against other teams, we’re definitely going to win some games.”

Now at 4-10 on the season, the Thunder’s playoff hopes are officially non-existent.

In their next game, they visit third place Canadore College who are 9-5 and look to extend their winning streak to four games.