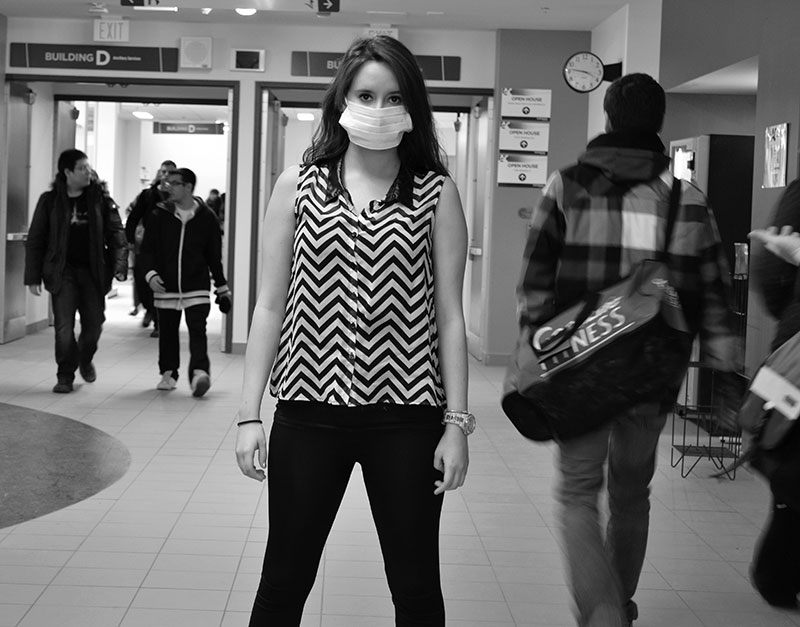 The peak of flu season is upon us and type A (H1N1) influenza is the most common flu virus this year causing 26 confirmed deaths to date across Canada, according to the Canadian Medical Association Journal website.

People aged 20 to 65 are being hit harder than usual, accounting for more than half of the H1N1 cases reported so far. This means students especially are in danger of catching this strain of the flu.

Fortunately, all three Algonquin campuses offer free immunization through the Health Services Department. The 2013-2014 seasonal influenza vaccine protects against type A (H1N1), type A (H3N2) and type B influenza.

Despite this, many students are not taking advantage of the free and easily accessible flu shot. According to Judy Doxtater, a registered nurse at Health Services, about 15 people come in each day to get vaccinated.

Doxtater says fear and miscommunication are at least partly responsible for the low numbers.

“Most of the time people say they don’t believe in flu shots or they don’t like the idea of putting something foreign in their bodies, but there’s a lot of years behind making vaccines and many steps involved to make it safe,” she said.

Influenza is a virus that is constantly changing, so the flu shot is the only vaccination that is continually updated.

Still, some students report hearing that the flu shot can actually make you sick.

“It’s impossible to get the flu from the flu shot because there’s no live virus in the vaccine,” Doxtater said. “The virus used in the vaccine is dead and cannot give you the flu.”

At the time of year that the vaccine is given, many cold viruses are making people sick. It is infection with these viruses that may be mistaken for a reaction to the flu vaccine.

Another reason people reported not getting the flu shot is because they are healthy and think they don’t need it.
“People don’t realize it’s not just about protecting yourself but protecting those around you,” Doxtater said. “If we all protect ourselves, we protect young children, the elderly and people who are immune-compromised.”

Doxtater has been working at Health Services for about 10 years. Most of the students she has vaccinated often came in because it was mandatory for their programs or placements, especially if they would be around young children or seniors. She has seen a student come in to be vaccinated to protect her father who is going through chemotherapy, as well as a staff member who got it to protect her young children.

Similar to other flu strains, H1N1 is an infectious respiratory virus that is highly contagious and spreads rapidly from person to person. The severity of symptoms from the H1N1 virus can vary from mild to intense and sometimes require hospitalization. In some cases, severe complications such as pneumonia and respiratory failure can cause death.

The vaccine is up to 80 per cent effective in preventing flu infection in healthy adults. With such dangerous influenza viruses popping up across the country, health officials are encouraging the public to know the facts and do what they can to prevent getting sick or spreading it.

“It’s a free vaccine, it’s available to everyone, it protects you and prevents sickness for a whole sector of people,” Doxtater said. “It’s important to take that extra step, it should be a no-brainer”.