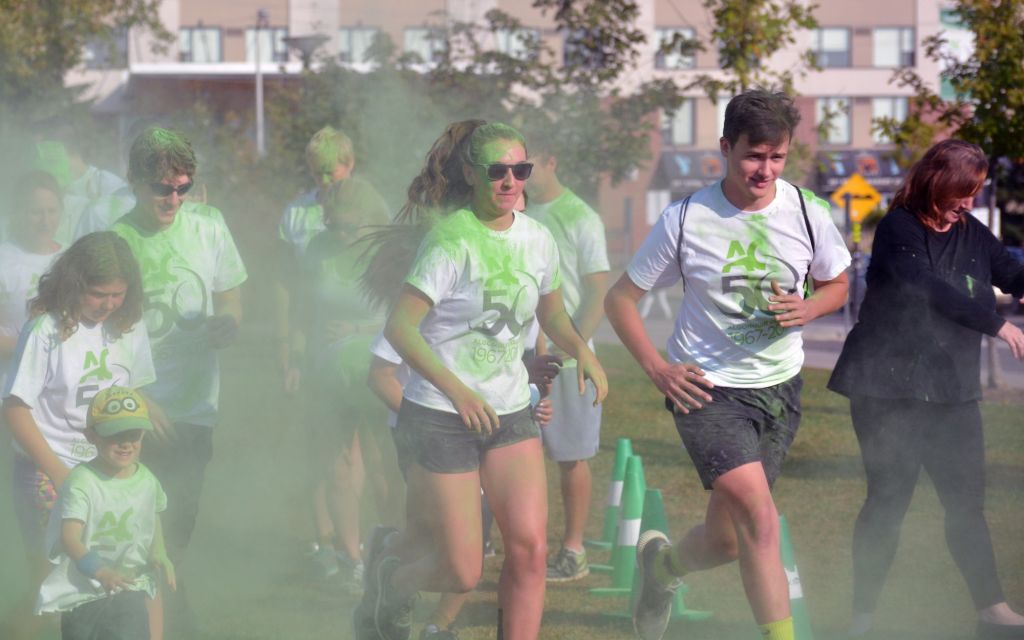 It's easy being green. especially when you participated in Saturday's colour run at the college.

With green powdered paint covering her from head to toe, Shreya Patel smiled at the colourful experience that had just come to take place.

“This brings back memories of home,” said the first-year computer programming student, after volunteering at Algonquin College’s first-ever colour run on Sept. 23.

For Patel, the run was reminiscent of her home country of India and the celebration of Holi – a Hindu tradition also known as the “festival of colours.”

The run, which took place on the Algonquin Commons Front Lawn and in the surrounding parking lots, was in commemoration of the college’s 50th anniversary.

The event included a five-kilometre run and a two-kilometre walk. It attracted 105 registered participants and 35 volunteers.

Among those celebrating the school’s anniversary were prominent Algonquin community members who addressed the participants prior to the run.

“Algonquin is a tremendous source of pride,” said Bob Chiarelli, in his opening remarks. “And it is recognized as one of the best in Canada.”

“When you look at your roots, you get to look forward to where you’re going,” said Ventura.

Looking ahead to the future is one of the initiatives the 50th Anniversary Mobile Tour is undertaking with its nine-week voyage across Ontario, visiting all 24 of the province’s colleges. The tour’s staff, along with their colourful trailer, were present at the event.

All those present had the unique opportunity to see their presentation which included an interactive museum inside the trailer.

The purpose of the tour, said coordinator Eleni Rouvas, is to “celebrate the history and successes of the college education system.”

“We’re focusing on where it’s come from, where it is today and where it’s going tomorrow.”

“I dreamt about this event six months ago,” said Barker, 50th anniversary promotions and events officer at Algonquin. Barker, who organized and planned the event, was pleased with its outcome.

“I’m so happy,” she said. “I couldn’t have asked for more perfect weather or participants. Everyone was engaged and happy and energetic. And that’s exactly what this event was supposed to be about.”

The participants were energetic even as they crossed the finish line. Both Sara Masicotte and Rosie Twomey were thrilled with the event and glad they participated.

“The weather was perfect. I was worried it was going to be too hot,” said Masicotte, a student from the University of Ottawa. Twomey, a first-year police foundations student, agreed and enjoyed the experience of having her first year of the college be a “celebration year.”

The colour run was one of several events Algonquin will be hosting in commemoration of the college’s 50th anniversary. The next will be a trivia night on Nov. 15.