Glue sticks around for a fun decade 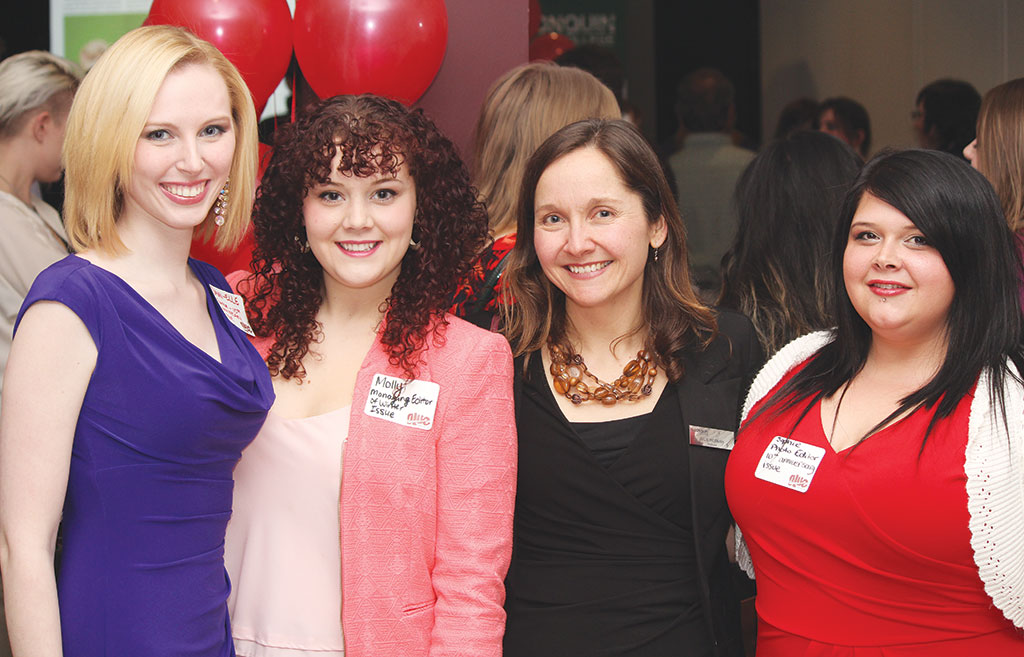 Dani-Elle Dube, Molly Hanzidiakou, Julie McCann and Sophie Desrosiers all came to celebrate the 10th anniversary of Glue magazine. They are all part of the winter 2014 senior editor staff, under the instruction of McCann.

Cold nights and warm memories bring students and staff both new and old together to celebrate ten years of Algonquin’s Glue Magazine.

February saw the passing of an important milestone in student journalism at the college. Not only was the 20th issue of Glue Magazine released but it also marked a decade of publication, and the event did not go unnoticed by those in the journalism, advertising and public relations programs.

Representatives from each program publication year, descended on the college Feb. 12 to help in the celebration. Familiar faces like Catlin Kenny, who now is an associate managing editor at Flare magazine, program professor Julie McCann, and media chair Robyn Heaton, who both founded Glue 10 years ago were on hand.

It was all kicked off with a very stirring talk by Brent Reaney who wrote the very first cover story for Glue Magazine. He spoke to the crowd on the things he learned on Glue and how they translated to his current job in Yellowknife.

Kenny was also effusive in her praise of the magazine.

“It’s a pleasure to be here to talk about something so dear to my heart,” Kenny went on to say in her speech. “It’s been over four years since we sent our issue of Glue to the printers but I still feel all fuzzy every time I think about it.” She explained how stressful and anxious they felt when they sent the copy out, worrying about every little mistake, but in the end found it was very rewarding.

When asked about their favorite stories and moments both former and current students seemed to have a difficult time pointing just one out.

“When we got all the proofs done and sent to print,” Jessica Cunha said in her favourite story. “In the first year when I was chosen to do a piece for Glue, I wrote about a straight edge DJ in the raver scene, and it was a lot of fun doing the research and to talk to him about the culture and how we were able to stay away from more of the negative aspects.”

Parties that were held during the years also seemed to be among the favorite moments. The launch party was the one that really stuck out in the mind of Robyn Heaton, one of the founders of Glue.

“We wanted to have a big splash and we had a lot of people out; we had the ad students and the journalism students. We had a benefit concert at the Observatory, and just seeing it get off the ground after two years of trying, we were really proud of the moment.”

“Glue has been an incredible training vehicle for our students.” journalism co-ordinator Joe Banks said. “It’s the best new thing that this program has ever done since I arrived here in 2000.”

In the end, Julie McCann the other founder of the magazine attributed its success to its uniqueness.

“It’s a bit of an unusual magazine and every issue, Glue is reinterpreted and reborn.” McCann added that the great support departmentally has also helped in its success.