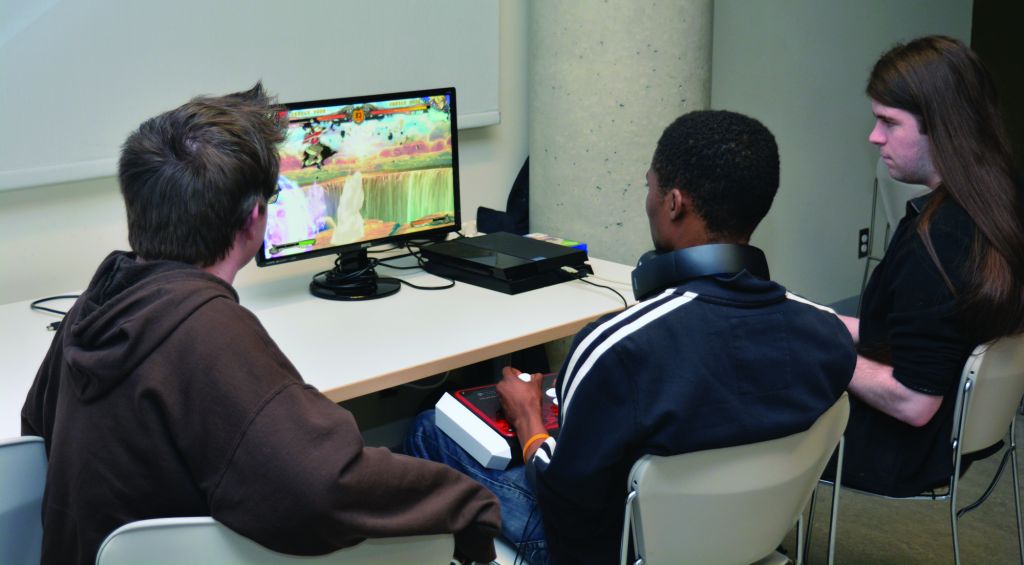 Participants of Algonquin’s Video Game Club fight every week for the glorious victory of street fighting, smashing and the revolution of dancing.

To most gamers, this sounds epic but to them, it’s just another Thursday night.

As soon as the clock strikes 5 p.m., club members bring out their games and consoles and start gaming the night away. Some are victorious, some would fall in defeat but everyone is having a great time.

Bruce Szego, a previous student of the game development program, spearheaded and created the Video Game Club all the way back in September 2012 and it has only been growing since then.

“There wasn’t a club on the books when I started,” said Szego. “When I came in there was no games club and this building (E building) did not exist.”

According to participant and volunteer Colin Street, the club currently has over 40 regular members who play competitive Street Fighter, Super Smash Bros. and Guilty Gear Xrd.

However, the organizers and participants want to welcome anyone to bring any games and/or consoles they want to play and share.

The club has expanded so much over the years that there has been trouble in the past with overcrowding and taking too much space in other rooms. Soon the club was given permission to expand in the room next door.

In its first year, the Video Game Club had a difficult time finding a regular location, appropriate funding and a voice to attract people.

There was difficulty finding a permanent room where the club could meet for the first month of organizing. Luckily, the E-Building was built in late October 2012 and gave Szego and his friends a place to hold their club activities.

In the first year of running and organizing the club, Szego had to fight hard with the Students Association for proper funding of equipment. Every year, the SA would have their budgetary restrictions and give the club limited funding.

“When I started, we had a pool of $500 that we could use to operate,” said Szego. “However, there were rules involved, we couldn’t buy equipment and we couldn’t buy hardware.”

Szego was only permitted to use the pool of money to purchase food, tables and chairs, nothing that they could keep. During the first year, Szego paid for a lot of the equipment out of his own pocket.

Szego explained that he would constantly harass the SA to lift the budgetary restrictions. The SA eventually agreed and stopped charging the club to run events and tournaments.

“It was so much cheaper to let me run student events then to have outside organizations try to run them,” said Szego. “The turnouts we were getting were crazy; the first couple of events was like 50 people and then we were doing Smash events with like 250 (people).”

Soon the club was able to gather and rent out more equipment for club use with the help of outside friends of Szego. The club currently has access to 10 monitors, one Playstation 4 and much more including anything else other members bring from home.

The club’s current organizer Benjamin Smith, who is still getting used to his new title and responsibilities, says that he is trying to organize some tournaments in the near future.

“I would be down to do more tournaments,” said Smith. “I have no past experience, so would I need someone to point me in the right direction.”

Smith is currently trying to host a tournament sometime near the summer when students are starting to relax and wind down at the end of the semester.

The Video Game Club has hosted a variety of tournaments in the past with games including Street Fighter, League of Legends, Super Smash Bros. and DOTA 2.

Smith also hopes to bring back one of the newer events called a random game tournament where participants play a different game every round which could include a simple Frisbee game or one of the Mario Party games.

The Video Game Club meets every Thursday night at 5 p.m. in room E209. Everyone is welcome to pick up a controller and play some games and meet some new friends.