Frying through air in ACCE building 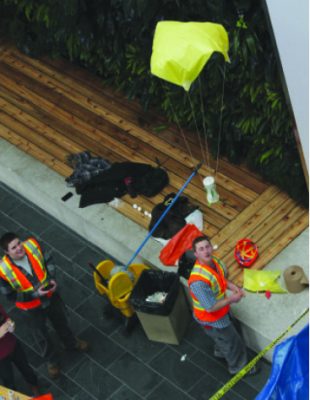 You have to break some eggs to make an omelette or the perfect miniature parachute device.

Over the noon hour on March 11, about 20 participants from a variety of programs were challenged to take turns dropping eggs from the third level of the ACCE building beside the biowall. Their goal was to find a way to keep the eggs from ending up scrambled when they hit the ground.

They each built devices, mostly out of Popsicle sticks, styrofoam cups and plastic bags and eventually dropped the eggs into a tarp laid out on the ground level.

A team of third year civil engineering technology students organized the challenge as a project for their leadership class.

Two organizers, Josh Blimkie and Tom Beaulne, would carefully inspect the eggs to see if they had survived impact with the ground. They were equipped with hard hats, safety vests and mops.

James Power, another organizer, helped participants drop their eggs, took their names and set up a laptop playing hit music on the third level. According to him, the event was welcome to all students and there was no need to sign up in advance.

“It’s open to absolutely everyone,” Power said. “If you come through the door then you can do it.”

There were a few prizes up for grabs including gift cards to the Observatory and Canadian Tire but most of the students dropping eggs appeared to mostly be there for the fun.

Becky Lavoie took part in the game and ran down the stairs to see if her egg had cracked with impact.

The people who used parachutes consistently kept their eggs safer than those without. Fouad Sbeiti used a large parachute strategy and watched his device slowly descend to the ground, landing smoothly without a scratch.

“We had originally banned parachutes but decided not to because they are too much fun,” said Power.