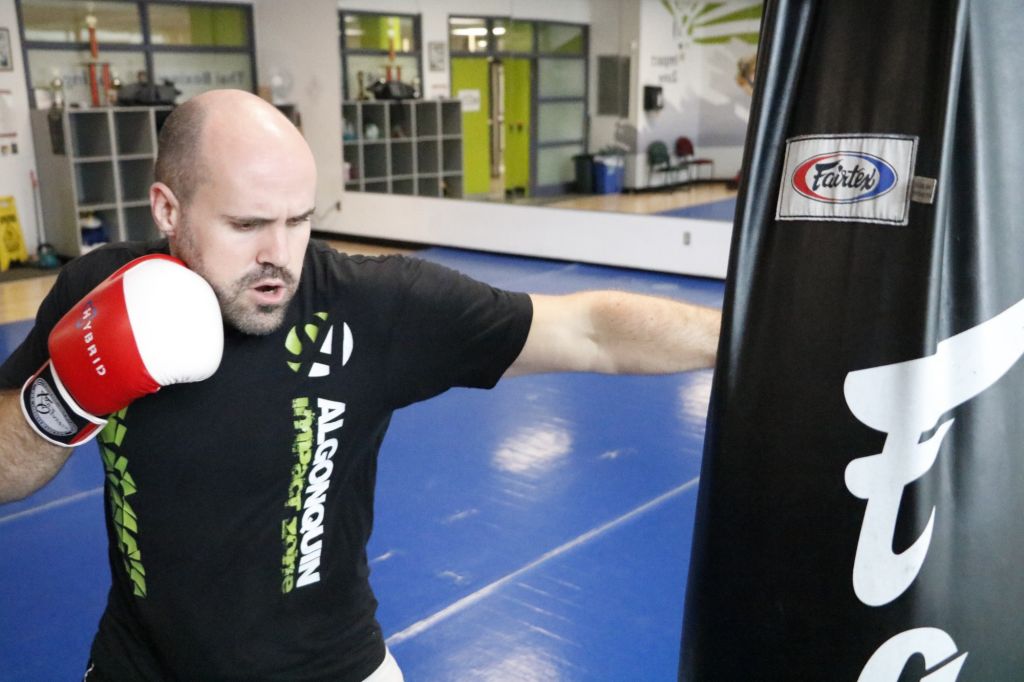 Terry Rea, 36, has worn many hats in his 10 years as an Algonquin employee. He teaches mixed martial arts and submission wrestling at the school’s Impact Zone, passing on the wisdom he accumulated after years as a professional cage fighter. He is a senior personal trainer at the gym, where he pushes his clients’ to reach their physical potential one drop of sweat at a time.

And now, he is Algonquin’s newest registered massage therapist, putting his calloused hands to use in order to heal nagging injuries, aches and pains.

“I got involved in that pretty heavily,” said Rea. “I started competing in grappling and jiu-jitsu tournaments and stuff while working on my striking, all with the idea that I would one day do MMA.”

While he was training for a fighting career, Rea worked a couple of dead-end jobs, unsure of what to do with his life. His career in athletic training began when he was hired as a personal trainer at Goodlife Fitness in Barrhaven, a career he was able to embark on due to the fitness he had attained through fighting and competing.

“I had gathered a pretty decent knowledge base in strength training. Also, being involved in martial arts, I had started coaching as well,” said Rea. “So I kind of just ran with that (personal training). I enjoyed the interaction with people and seeing the fruits of your labour, and their labour, grow right in front of your face.”

It was during his time at Goodlife Fitness that Rea first became interested in massage therapy. Many of his clients, who ranged from office workers to combat athletes, suffered from nagging injuries and pains. While he did his best to prevent the issues from getting worse, there was little he could do to improve his clients’ issues.

Rea soon began educating himself on corrective exercise, to the point where he was able to work in partnership with his clients’ chiropractors and physiotherapists. His reputation throughout the city as a safe and knowledgeable trainer began to spread.

“It really opened up this whole Pandora’s Box of anatomy and functionality for me,” said Rea. “I always found that stuff fascinating.”

Around early 2009, Rea was introduced to Wayne Boucher, the fitness and wellness coordinator for Algonquin’s Fitness Zone. Boucher had been seeking out a new MMA coach for the Impact Zone, the martial arts facility in the Ottawa campus, and Rea jumped at the opportunity.

“I fell in love with it,” said Rea. “I was teaching three days a week and still doing personal training at Goodlife. I started to build up a good student base, started having my students compete in amateur mixed martial arts, and I moved some of my personal training business over, started taking clients here.”

As Rea began to entrench himself in the Algonquin community, he developed a working system for treating people with injuries and limitations, as well as getting people to a high level of fitness. As he was still unqualified to give professional advice, he decided to seek out an education in massage therapy.

“I decided to go to school for this and work both ends of things,” said Rea. “I want to be able to help people more and I wanted to have a bit more control over their overall treatment. I wanted to really learn about massage and soft tissue stuff. They had a potential space for me here at the massage therapy clinic, and I figured that would be the best place for me.”

While Rea did not attend the massage program at Algonquin, he still credits the college and the community as being influential to his overall success.

“I love the community here, I’ve been here for a decade pretty much,” said Rea. ”I know a lot of people, and I love it. So I thought, why not expand my reach around the college? Why not expand my services to be able to better help clients and students and faculty?”

Having recently graduated from his program, Rea is now fully licensed to operate as a massage therapist and to help his clients recover from and prevent injury. He will continue to work as coach and trainer alongside his new venture, and looks forward to increasing his bond with Algonquin.

In the coming months and years, Rea hopes to operate his business as an innovative three-pronged training approach, mixing all three of his passions in order to provide a single comprehensive fitness plan for his clients.

And he wants to keep working with Algonquin to do so.

“It’s a really great opportunity for me and my three different roles here,” said Rea. “It’s been good. It’s been really good. And it’s going to get even better.”

He’s a fighter, he’s a teacher, and now, he’s a healer. Terry Rea, 36, has worn many hats in his 10 years as an Algonquin employee. He teaches mixed martial arts and submission wrestling at the school’s Impact Zone, passing on the wisdom he accumulated after years as a professional cage fighter. He is a […]

He’s a fighter, he’s a teacher, and now, he’s a healer. Terry Rea, 36, has worn many hats in his 10 years as an Algonquin employee. He teaches mixed martial arts and submission wrestling at the school’s Impact Zone, passing on the wisdom he accumulated after years as a professional cage fighter. He is a […]