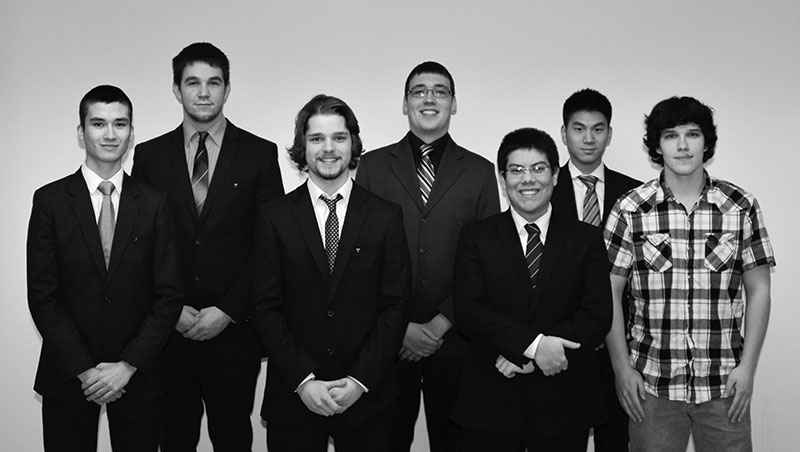 Algonquin’s colony of the Kappa Sigma fraternity officially added their 20th pledge on Jan. 21, bringing them one step closer to becoming the first fraternity at any college in Canada.

The men had a meeting the night of Jan. 21, dressed in suits and ties. The founding fathers of Algonquin’s largest colony discussed logistics of the events they plan to host at local bars.

“I officially call to order this meeting of the Algonquin College colony of Kappa Sigma,” said grand master Jose Barbosa Montiel, president of the colony, hitting his gavel on the table to mark another meeting of the unofficial fraternity.

Before the colony can become an official chapter of Kappa Sigma, the largest fraternity in North America with over 300 chapters, the men must meet certain requirements as per the guiding principles laid out on the Kappa Sigma website.

“Kappa Sigma is an international fraternity, one of the biggest in the world,” said Montiel. “We often contact other members of chapters or colonies for advice or guidance and the closest would be Carleton. There’s a huge pool of alumni and undergraduate members to call upon, so there’s never a shortage of advice.”

The men need more brothers and that means more pledges from Algonquin. The colony has been organizing informal rush events where they plan to garner attention towards the colony and attempt to recruit new pledges.

“Our hope is that we become chartered by the end of the semester with around 40 guys,” said grand procurator Kevin Dunk, vice-president of Algonquin’s colony. “Charters on campuses have lasted over a hundred years… It’s a legacy. And so in order for it to continue you need 40 guys to sign on so they can get another 20, and so on.”

Matt Mangan is the colony’s guard, responsible for disciplinary measures within the fraternity, and took obvious pride in Algonquin’s colony.

“It’s all still starting in Canada. It’ll be difficult for a college fraternity because most programs are only two to three years long,” he said.

Kappa Sigma has offered these men an improved social life. They’ve gotten together to watch hockey games, play cards and go downtown to visit the bars and clubs.

“People more often than not do it for the social aspect. When you’re so busy you don’t get that chance to meet people so they come for the friends and for the good times,” Mangan said. “We realize it’s not all about parties and drinks, there’s so many other ways to have fun. The biggest thing, of course, are the job opportunities you get after college.”

One of Kappa Sigma’s slogans is, “Building better men.” As the largest fraternity in North America, all members are told to hold themselves above standard when they wear the pledge pin.

Cole Gordon is a pledge in Kappa Sigma, taking business marketing at Algonquin. He spoke of the benefits of joining the colony.

“The networking opportunities are incredible. There’s a lot of room for personal development like becoming a better public speaker at meetings and events,” he said.

If Algonquin’s colony is chartered, Gordon’s name, along with all other members’ names of the fraternity in its current state, will be engraved on a plaque as founding fathers of Algonquin’s first chapter, and Canada’s first college chapter.